Maybe it's just the casual side of me, but I am so excited about Werewolves in new Standard!

I think this tribe was close to playable before Dark Ascension, but now we get a bunch of new tools. Last week, I talked a lot about Huntmaster of the Fells. That card is such a high power level that a home will be found for him. Obviously one place is with his tribe. I think he is an obvious inclusion, but the rest of the deck might be a little tougher. If we want to build a werewolf deck, we should take a look at what our options are.

To me, this deck seems straightforward to build. Here are the key concepts that go through my mind when I set out to put this initial list together.

This deck is designed to be as aggressive as possible, so we want a consistent stream of threats early in the game. Especially with Blue/White Delver and their amazing tempo strategy, we want to be able to play multiple threats per turn when they bounce our creatures. We also want to be able to play our spells early and often. By designing out deck this way, it gives us the best chance to win. Werewolves might not be the next big deck to beat, but we want it to be able to compete in the metagame.

In this deck we do not want to be playing sorceries because we can utilize our opponents turn when we skip ours to flip some werewolves. If we play our spells on their turn, it's like we didn't have to skip our turn and the werewolves have much less of a drawback.

3. Every Creature is a Threat

Each creatures must be good enough on its own and not rely on the tribal synergy in order to be good. This is the reason that tribal strategies are usually not good enough, because when you are going for synergy you make sacrifices in threat quality. The threats must be good compared to the expected metagame.

Keep that in mind, because cards like Doomed Traveler are not necessarily good on their own, but they are good in the metagame right now. We want to make sure that the creatures we are playing match up well with the creatures everyone else is playing. Let's take a look at which werewolves I think are good enough for the deck and why.


One mana gets us a 3/2. It’s sort of like Red’s Delver of Secrets, but easier to flip. This is on the same power level as Diregraf Ghoul. It's a one mana threat that provides a decent clock. Against any non Delver of Secrets deck, it has a decent chance of flipping early if you play it turn one.
Wolfbitten Captive is the new kid on the block, but I think he will turn out to be quite important for this strategy. Right now players are not giving him the credit he deserves. Being able to pump himself on both sides is very powerful. Players are focusing on his lack of synergy with the cost of the pump on the flip side rather than on how powerful that is. If he does not flip you can pump on turn two or play another creature, your choice.

If he does flip, then you can’t pump, sure, but you can still play another threat. Just because you have to wait until later to pump is not a bad thing. I actually like this because you don’t get blown out by a removal spell if you choose to pump early. Also, pumping to a 6/6 to trade with a titan is quite impressive for the flip side of a one drop. The only other one drop that can trade with a titan, Typhoid Rats, I would never advocate playing. Wolfbitten Captive might not be the best one drop ever printed, or even the best one drop in Standard, but he is still a solid creature. 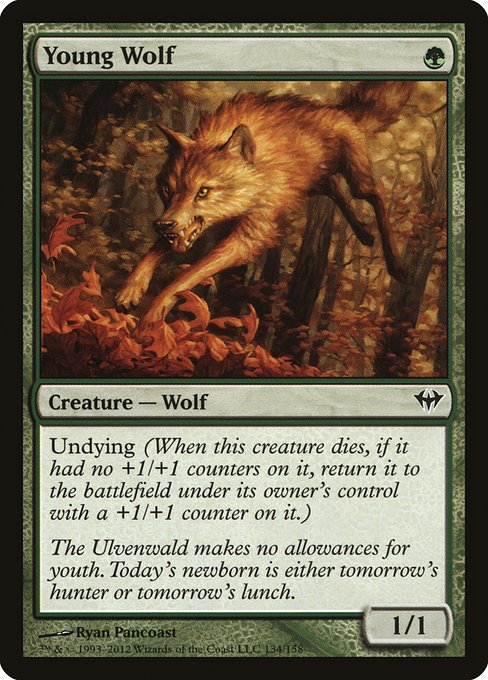 This card was not included on the werewolves list but I think he is better than either of the two actual werewolves. Is this Green’s Doomed Traveler? No! It’s better! That’s right, better. Sure, it only starts out as a 1/1, but when it dies it comes back as a 2/2.

Bounce that Vapor Snag Players! Seriously though, Young Wolf and other undying creatures have a natural resiliency to Vapor Snag. Sure they can be returned to your hand but if they are returned after they have died once, you are glad to get another use out of them. I think we are only just starting to understand just how good creatures with undying are. Hex Parasite is even worth consideration because of his synergy with undying creatures.


I think Gatstaf Shepherd is one of the most important creatures in the deck. The reason he is such a vital piece is due to the keyword on his flip side.

With all the tokens running around, being able to swing right past them will get you a long way in this new format. Even if Black/White tokens doesn't become popular, against most decks Gatstaf Shepherd basically acts as a Stormblood Berserker. This evasion in the form of Intimidate makes him hard to deal with.


I am not convinced that this is the deck for Mayor of Avabruck. He is in the list right now because I need another two drop and the goal of building synergy between the creatures.  I actually think that Strangleroot Geist is a better choice, so he may actually end up in the deck.

The mayor just takes too long to get active. Sure it’s nice that he is a lord for humans on one side and werewolves on the other, but he dies so easily and it feels like it takes forever to get him active. If you are able to make even one creature from his flip side ability, playing him is worth it. Otherwise, he might not belong in the deck. It might simply be better to hold him in your hand and play him later in the game after they've used up their removal.


Daybreak Ranger adds a level of complexity to this deck that makes it harder to play against. Acting as pseudo-removal is an important role in this deck. Without Daybreak Ranger, this deck would be much worse. He is good enough that he has seen play in some rogue Standard decks. If you have ever had to play against him when your plan is Delver of Secrets, you know how powerful he is.

Daybreak Ranger can single handedly take over a game against Delver of Secrets. What more can you ask for in the metagame right now?


Huntmaster of the Fells is by far my favorite werewolf.

The amount of built-in card advantage he provides is unreal. Even if he dies immediately, which he should if your opponent knows how good he is, you have still gained two life and now have a 2/2 wolf creature in play. If for some reason they don’t have the removal spell, you now have a serious threat on the table that is hard to deal with.

You don't even have to attack with him. Just passing the turn and letting him flip is game changing. After that, play two spells and flip him back for more value. Many players think he is overrated but I think he is vastly underrated. Again, part of what makes him great is because he is so good against Delver of Secrets.

Rounding out the deck:

What else do we need to finish up this deck? Instants. We need Instants. Since we are going for a mono Red style deck, I feel that burn is the way to go.

Some Gut Shots seem necessary as well with how the format looks right now, but that may change later.

Finally, I think a pair of Devils Play will simply end a lot of games for you. Paying one for x isn't so bad if it's to kill a Delver of Secrets.

This deck might not end up as the winner of the Pro Tour, but it is certainly a ton of fun.

Who doesn't love a little Moonmist in their life from time to time? There are a lot of powerful cards in the deck that make it competitive, but the real reason to play this deck is to have some fun beating people with giant transforming guys.

Until Next Time,
Unleash your inner Werewolf!