Dealing in cards on Magic: the Gathering Online Trading League (MOTL) is war. Often times, MOTL is where sharks go to make profits when they are too small or too busy to run an actual store. As a result, it's often quite cutthroat.

Every time I create a new sale list, there will be at least a couple members who will offer lowball prices on already-competitively priced cards. It’s inescapable, and at times frustrating. I will admit that even I fall into this trap on occasion – I become greedy and attempt to find a steal on MOTL in order to garner a tiny bit of profit.

I’ve quickly come to the realization that MOTL is not the optimal venue for finding profitable opportunities.

Being Opportunistic vs. Being Anticipatory

During the earlier rounds of Pro Tour: Honolulu, I observed that Huntmaster of the Fells // Ravager of the Fells was seeing an impressively decent amount of play. What’s more, many players were commenting on how powerful the card was in the given metagame at the time.

That Friday, I decided to take a small risk and purchase three copies of the Huntmaster at around $10 each. I did so in anticipation of the card’s further success. The payoff far exceeded my expectations when eight copies of the card landed in the finals between PV and Kibler. Should the tournament seen an alternate outcome, Huntmasters may never have skyrocketed the way they had. 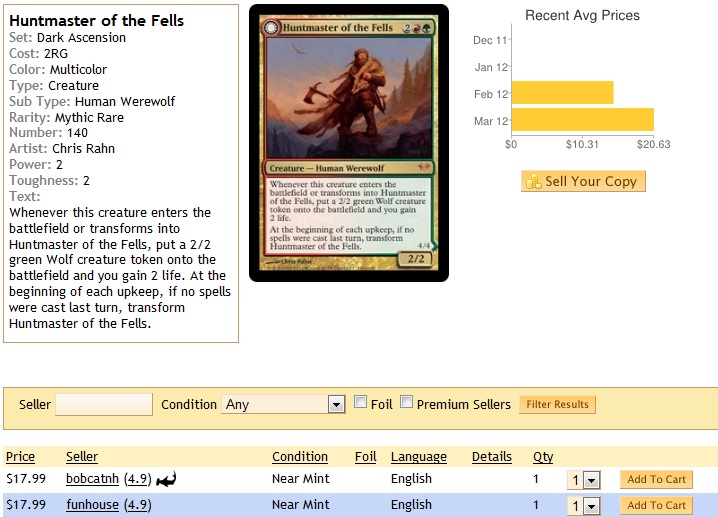 Profiting from these circumstances often lie in our inherent ability to predict cards’ performances. For example, we could have observed a card like Elesh Norn, Grand Cenobite combos well with Unburial Rites and is quite the powerhouse even at seven mana. With this conclusion, we decide to purchase a handful of the card while it is still selling on MOTL in the $10 range.

This path usually implies some level of risk. Acquisitions are being made before a given card has proven itself.

These anticipatory pick-ups are often what the writers here at Quiet Speculation like to elaborate upon. Our predictions are usually around cards that have the potential to double in value, often with limited downside.

But I want to take a moment to distinguish between attempting to acquire cards which may increase in price versus acquiring discounted cards below going market price. The former often requires some risk, but quantities are normally available because a card is not yet proven. The latter involves less risk, but usually requires patience and discipline as you sort through countless collections and listings looking for the precious few with opportunity.

While the endeavor of acquiring multiple copies of Past in Flames in anticipation of a price rise (which never happened) was exciting, I often prefer my acquisitions to be driven by opportunistic pickups.

Where I Find These Opportunities

If underpriced cards were readily available, they wouldn’t be underpriced. The economic law of supply and demand ensures the “invisible hand” shifts inventories until the final price is established.

But opportunities do exist. This is due to an array of factors, such as price fluctuations, limited supply or demand markets, aggressive sellers, etc. My intent is not to elaborate upon all of the reasons why opportunities exist – rather, let us operate under the assumption they do and for various reasons.

I almost never sell items on eBay. Besides the fact that the fees are far too constrictive to profit reliably, the corporation will almost always side with the buyer on any disputes. The only time I’ll resort to eBay to sell is out of desperation, when I’ve realized there are not many buyers for this particular item.

Buying on eBay, however, is one of my favorite pastimes. I can basically name my own price, and if the cards exceed that price I simply don’t buy. It takes a minimal amount of time searching for a particular item and placing a few bids. And while it takes a lot of trial an error, persistence is often rewarded.

For proof, search any card on eBay that has some significant value. Let’s use Underground Sea for example. Take a look at this ended auction: 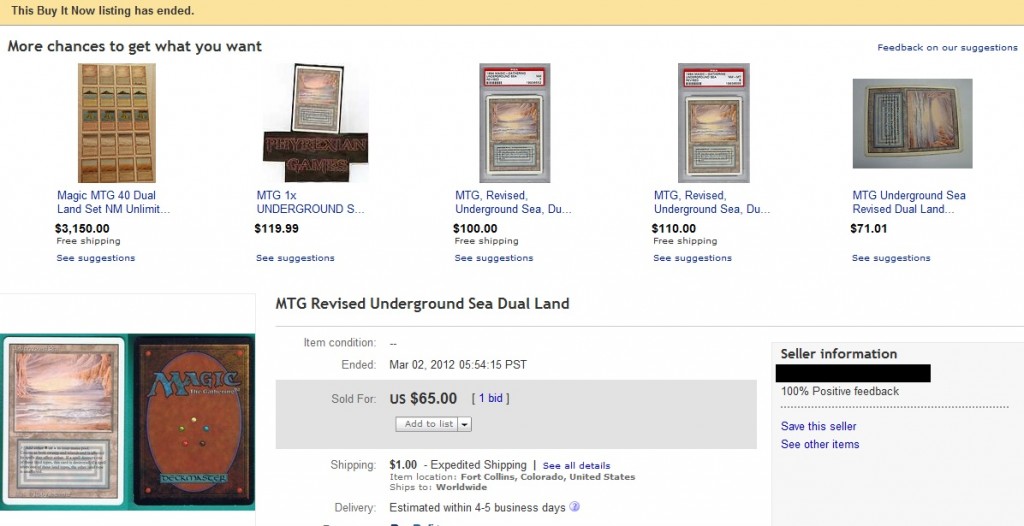 This was the cheapest tournament legal Underground Sea auction to have ended on eBay in the past few months. Would you have been interested in purchasing it for $66? I sure would have! Sellers are humans and they do make mistakes. When they underprice a card, write a poor description, or take a poor picture, you can profit. But don’t take my word for it – try your own search and browse completed listings. You’d be surprised how wide of a price spread exists on many popular cards. Especially the more obscure ones.

I repeatedly mention this website in my articles. You may begin to think I am part owner – I assure you I am not. I do shop on this site very frequently because of the opportunities that present themselves.

Often times a new seller on Cardshark will want to rapidly accumulate feedback through sales. To do this, they charge sub-eBay prices on a handful of cards. Don’t believe me? Check out this purchase I made just a couple weeks ago: 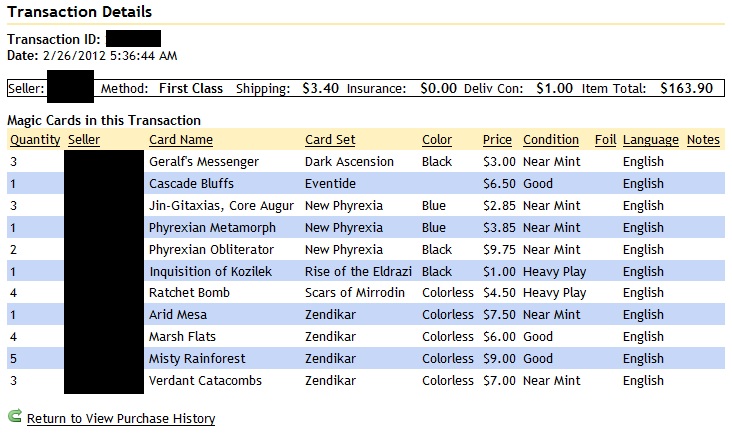 Pretty reasonable deal, no? I’ve already managed to sell every card on this list for some profit except for the Cascade Bluffs, which I still own.

I’ll admit, this was the largest haul I’ve ever made on this site. But corner cases still exist, especially when prices are on a rapid incline. I originally found this seller because I saw he had two Phyrexian Obliterators for sale at $9.75 and I knew they were on the rise. After browsing the rest of his inventory, I swiftly added over two dozen more cards to my cart! Next time you see some cards on the rise, check out Cardshark. The shipping costs are tough to stomach, but if you can find a large group of underpriced cards from a single seller, you stand to gain handsomely.

I began this article stating that MOTL is not an optimal place to find bargains. This is perhaps only half true. It really all depends on your approach… and how much time you have.

There are hundreds of sale lists on MOTL at any given time. A good portion of them are uninteresting to the speculator for a variety of reasons: the list is too small, prices are too high, cards are too obscure, seller’s rules are too strict, etc. 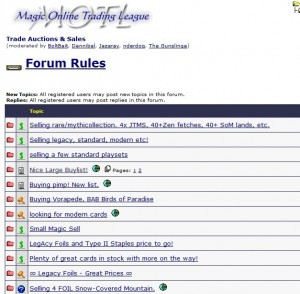 If you have enough patience and endurance, with a sprinkle of luck, you may be the winning person who is first to post on a new sale list with underpriced cards. Then, if the seller doesn’t realize his prices are too low, you may make yourself a nice profitable purchase.

The other 95% of the time you will be forced to navigate through sale lists with average prices and maybe one or two bargains. This leads to the negotiation step, which all sellers respond to differently. Make a reasonable offer to an anxious seller and you may still score a deal. Make a lowball offer to an agitated seller and prepare to be ignored or even lashed out at.

This is the reason I rely more heavily on eBay and Cardshark. I don’t have the fortitude to submit offer after offer with no response. Also, as a frequent seller on MOTL, I easily become frustrated with negotiators. I don’t want to be hypocritical, after all.

This article touches upon the sources I use most frequently. There are other avenues such as small-scale retailers who don’t update prices often enough, sites like TCG Player and even your LGS. Even dealer booths at larger events can sometimes misprice a card or two.

Depending on how much time you have, there may be good reason to try this strategy. Search through eBay listings, look up some up-and-up cards on Cardshark, and browse a few MOTL lists. This gives you a feel for what cards should sell for and which ones are selling at a bargain. Even if you cannot identify any opportunities today, you will still learn something about the singles market. This can only make you a stronger trader.

I’ll leave you with a few last tips on how I browse eBay for deals:

Once you have acquired some inventory at bargain prices, the next logical phase is unloading them for profit. Next week I'll dive deeper into the different approaches you can take when maximizing sales and/or unloading quickly, depending on your goals

7 thoughts on “Insider: How to Find a Bargain”