I'm back again this week, scouring event results for more Modern speculation calls for your trading profit. Why should you care about Modern? Even if you don't play, there is a lot of official support for the format. The Pro Tour for Avacyn Restored features Modern, as do several Grands Prix this year. Modern events fire almost every day on Magic Online, which brings us a steady feed of information. No doubt, pros are looking at these same results and compiling the best decks to bring to the Pro Tour. We've seen double-digit price changes during Pro Tours and I don't think Modern events are any different. It's the perfect time for breakout cards to shine. Let's take a look at a few that I've identified early in the lead-up. 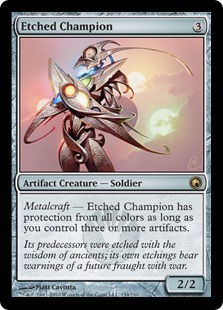 No surprise here, Etched Champion is a good fit in what we're still calling Affinity these days. I've tested many, many games against Affinity and this is probably their scariest card next to Cranial Plating. To understand why, you've got to know how an Affinity game plays out. They will usually toss out three or four cards on the first turn. Next turn, they'll play a Plating or maybe an Arcbound Ravager. This is predictable because Affinity never keeps hands without something like Plating, Ravager or Steel Overseer. Let's say you took out their initial burst of energy - you had a Maelstrom Pulse for that Plating, you Smothered the Ravager or you Mana Leaked their Overseer. The Affinity deck must now rip off the top and hope that they can get more value out of cards like their manlands. They've got to get their guys in past an increasingly more powerful opponent. If you're playing Twin and drop a Deceiver Exarch, then half their monsters cannot profitably attack you any more. Their clock is basically done.

Etched Champion changes the way the midgame plays out considerably. Affinity can now do at least two damage to you each turn and there's nothing you can really do - it's like they have a mini Progenitus out! You can't even Firespout it away! The metalcraft is laughably easy to achieve and when the deck has it, anything else off the top can be exceedingly dangerous. If they get two Champions out, they can hold one back to block your biggest monster or just race uncontested. If they draw a Steel Overseer, the game is going to be over soon. If it's a Ravager, it's over... sooner. Though some Affinity decks skip out on the card, the ones that consistently place well tend to play 3-4 copies.

Etched Champion is about $2.50 right now. It takes only little action on these to make a big profit. Remember that sometimes, it's not the fanciest deck that wins - it's the most brutally fast one. This is especially the case in Modern, since the rest of the decks are really pretty powered-down. 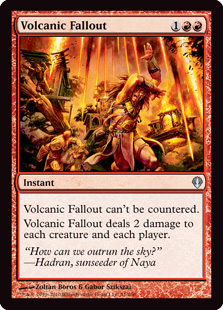 If we see more control decks emerging, it will be on the back of this card. The most important part of it is the first line. See, Snapcaster Mage has really done a number on Modern. The RUG Delver decks are really, really good. So good, they won GP: Turin recently. The deck's plan is to use Snapcaster Mage to recycle Mana Leaks while attacking with one or two cheap threats. They can drop a Delver on the first or second turn. You've got Firespout? They've got Spell Pierce. You follow on with a Damnation? They have Snapcaster on that same Spell Pierce. There's no beating the deck with normal sweepers. You've got to stick with things that they cannot interact with.

Volcanic Fallout is like a Sudden Shock that gleefully smashes everything it can for a single red mana more. It sweeps Delvers out of the sky and Snapcasters from the earth. It obliterates Elf armies and takes out timely tokens. The issue in building with Volcanic Fallout is that you really cannot depend on x/2s of your own. This means it's better for Twin decks and slower, more controlling lists. This, and not Damnation, will be what makes Mystical Teachings survive (if it can). With Snapcasters and counterspells so plentiful, racing Delver of Secrets is very hard. This card removes all of the pain.

For some reason, the Melira decks are also very popular on MTGO. These decks try to use Melira, Kitchen Finks and Viscera Seer to make infinite loops. Conveniently, most of the deck lacks big back ends. A common fallout of the Fallout is killing a Viscera Seer, shrinking a Finks and knocking off a Noble Hierarch. Not bad. The Melira deck is another one that depends on an early rush of good spells and crumbles if it has to live off the top of the library.

Volcanic Fallout is currently about 40 cents. I have several playsets at the moment and I suggest that you toss four into the next order that you get online if you've got any interest in Modern. It's a card that went north of two dollars when it was printed - and that was too late to stop Faeries. This could rise again, and it's a really cheap bet to make. 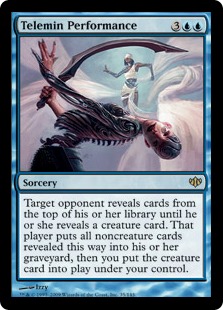 In the history of wacky sideboarding techniques, this is a favorite of mine. The idea is this - you're playing an opponent who has U/R Storm. If they aren't sideboarding into Twin, you bring these in. As soon as you hit the five mana needed, you mill them to death. Painless! You can also jam this against Tron players, taking out about 20 cards in their library and snatching an Eldrazi to ram into them, too.

OK, so I don't think it's a great strategy, but for some decks, it's the only strategy. Despite what a lot of people say, R/G Tron (with 4 Karn Liberated) is a really tough match. The deck can naturally hit Tron on turn 3-4 and from there, they play Karn, Liberace and start dismantling your board. While the Performance doesn't beat a Karn, it does give you something good to do against two of the better decks in the format.

This goes for around fifty cents right now. I don't predict it getting higher than $1-2 unless a player uses it, on camera, to kill a person on the Pro Tour. Keep this in mind, though; Bribery is north of $10 and a lot of that is due to early hype in Modern as anti-Cloudpost tech. 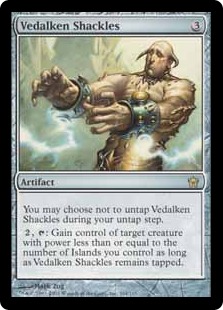 I am hesitant to suggest a card that currently sells for around $13, but I feel like this could be a real Huntmaster-style card. Vedalken Shackles, plainly, is one of the best spells you can be casting for three mana. It is quite strong in RUG Delver decks and makes appearances wherever Islands are present. If you look at the top decks, they rarely have a way to deal with this other than a Cryptic Command. It's cheap enough to protect with Spell Pierces if you have to, and when it hits, everything changes. Now, you don't want to cast that Lingering Souls so badly because Shackles will just grind the tokens out. That Deceiver Exarch needs another friend because an untapped Shackles can stop the Twin combo by stealing the to-be-Twinned creature. I expect a lot of recaps from the Pro Tour will involve someone on the ropes that comes back in with a topdecked Shackles.

On top of its in-game perks, Shackles is also by pros. Conley Woods and David Ochoa both ran Shackles in their decks at the last PT. If LSV doesn't run Tron again, I'd expect to see a few Shackles in his deck. Again, this is not a cheap card by any means, but it's not going anywhere. We see one or two well-placed decks with this in it and it can go up to Thoughtseize or Vendilion Clique levels. This is a card I'd attempt to trade for before I shelled out cash, but it's one I suggest picking up in the near future. The Shackles are both incredibly powerful and also hard to answer.

That wraps up my Modern calls for today. Much of the Modern metagame and tech is already known - I mean, how much profit is there to be made on speculating in RUG Delver cards? However, the fringe cards are always worth a few looks. On a side note, the fact that Time Spiral is being given out as prizes on MTGO makes me think that we are getting nearer to the "Modern Survival Kit," a hypothetical set meant to aid Modern players and confirmed by Aaron Forsythe in some fashion or another. Whether this means we'll see Tarmogoyfs come up in Duel Decks or see a Master's Edition printed that's not legal for Standard, who knows. But the influx of Goyfs onto MTGO seems entirely intentional and I predict that paper magic won't be too far behind.