Spoiler season continues this week, and we’re starting to see how this set will shape up. As usual, there’s some serious hype about a lot of these cards, and I’ll continue to walk through all the Mythics and Rares I didn’t cover last week. One thing to keep in mind, is what happens when there is a large(r) quantity of chase Rares/Mythics in the set, and how prices come to be. So, for a moment, I want to review exactly how these cards turn into highly priced singles, and then we’ll dive into the newest card previews.

All cards start out as sealed product. Cases cost approximately $600, and a pre-ordered 4x complete set (for a large set) is usually around $1,000. This set is no different. This is a formula that dealers create (knowingly, or not) that sets the initial secondary market pricing. They want to make a profit margin of X, and they need to recoup enough money on the chase Rares and Mythics to cover that margin. As a result, if there’s a large density of expensive Rares and Mythics, more people will buy more cases, and eventually the combined cost of the set as a whole will always revert to this formula.

So, when we start to see multiple Mythics pre-ordering above $40, and rares pre-ordering around $20, we have to imagine the entire collective of valuations is too high. Early in the preview season, we don’t know how dense the set will be with playables, so we hype up the first few playables and the preorder pricing spikes. However it doesn’t come back down when we discover that the set is actually very dense with desirables.
Eventually, we (and more importantly retailers and dealers) start busting packs, and the prices start to equalize. Eventually, it stops being worthwhile for dealers to break open packs, and we see a more natural stabilization of pricing. As a result, even the predictions I made as recently as last week I feel may have been overestimates after seeing what else has come about. Enough of the blathering, onto the spoilers! 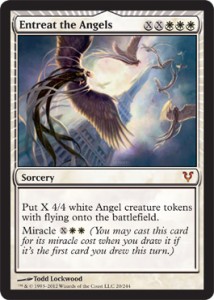 While this card is certainly a splashy application of the Miracle mechanic, I don’t expect this card to hold a $5 value indefinitely, but likely for the short term. It will see some amount of play, but not a ton, as no deck will ever want to draw more than one copy, meaning some control decks may play as many as two copies, but not more. Long term, this will be $3. Comparing it to Decree of Justice is just silly, and as you probably remember we already have White Sun's Zenith in this format which is an Instant, and likely much more playable. 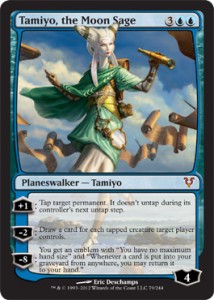 This planeswalker strikes a particular chord with me, as it looks like it fits in the types of decks I like to play, but again, these preorder pricings just simply can’t hold. At 5 mana Tamiyo won’t be a 4-of in any deck, and likely not played beyond 2 copies. The thing she does have going for her is that she’s fairly flexible in application, and both of the effects that she can produce the turn she is cast are fairly strong.

Some people say her +1 is “identical” to Ajani Vengeant, but the slight difference in the ability makes it that much better. While Ajani could prevent a permanent from untapping, it never actually taps the permanent. Tamiyo taps it and prevents it from untapping, making it good at moving blockers and counter mana out of the way when you’re ready to go on the aggressive.

I expect this card to settle around $20-25 over the next 2-3 months, but there’s a chance she stays even higher if she becomes the centerpiece of a popular Standard deck during the PTQ season. 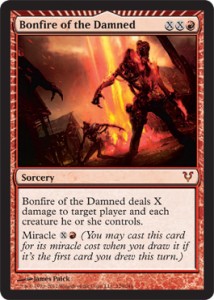 This card is essentially unplayable, and will ultimately fall to bulk Mythic pricing in the not too distant future. Only triggering on your turn, and giving your opponent too many ways to make choices to minimize the bleeding makes this card simply awful.

So the card text matches Lavalanche, but the costing is a little pricier, unless you can live the Miracle. Card is interesting, may see some fringe play in a U/R style control deck, but I doubt it. Being such a cool effect, and likely playable in EDH may float this Mythic around $4, but I wouldn’t expect it to make much of a splash. 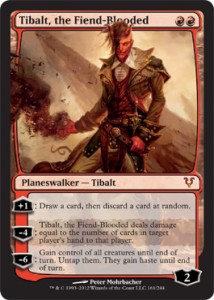 This guy has some powerful abilities for a 2-mana Planeswalker. But, he’s clearly very narrow. I also don’t really like how the combination of his abilities don’t have much synergy. He may find a home as a control mirror breaker. Discarding a card at random is not quite as scary when you can safely keep your hand padded at 7 cards to protect cards you want to keep, and blasting your opponent in the face for 5-6 damage is no small number.

If the discard isn’t a drawback (Burning Vengeance maybe?) there may be some even more powerful applications of him. Its too early to tell where he’ll end up, but it will either be very low ($10-12) or very high ($25-30). I’m leaning towards low, but he certainly has some potential, it just depends on what the Standard format reveals.

Before I wrap up, I do want to address at least one of the Rares:

This card is clearly bonkers. It has obvious synergy in a tribal themed deck, but really should just go in almost any deck that plays a reasonable number of creatures, and that number doesn’t even need to be very high. The fact that this land comes into play untapped and produces colorless for any spell, while having the no-life-loss Boseiju, Who Shelters All for Creatures ability, is pretty unreal. I envision this being 3-4x in Wolf-Run Ramp. First copy will name Giant, ensuring that the Primeval Titan will resolve, then if necessary, the titan can grab additional copies of the Cavern, and then protect nearly ever creature in their deck from countermagic.

This card alone means people will have to be playing Ghost Quarter if they need to combat this card. While the Preorder price of $22.99 is likely not going to hold, I expect it to be a minimum of $15 indefinitely. This card has an extreme power level we haven’t seen on a Rare land since Mutavault. This may also mean that Ghost Quarters could spike up during PTQ season, but I’m not too convinced as with two printings they may just be too easy to find. I know I’ll want to play this card, but I’m just not willing to shell out nearly $100 for the playset without knowing what deck it will slot into just yet.

Thanks for joining me on another Spoiler Season adventure. Next week I’ll hit the rest of the Rares and any remaining Mythics that trickle in. I’ve still got my eyes out for quality uncommons, but thus far there’s nothing I want to sink a preorder into yet.