Pro Tour Avacyn Restored brought us a much wider variety of decks than I expected. Hopefully, a bunch of you jumped on the early Wolfir Silverheart tip, and are currently facing the #FirstWorldProblem of finding the best way to unload them. I agree with Doug’s update, that this price on Silverheart can’t hold. While I do expect it to see some standard play, it won’t be in huge numbers and its a non-mythic. $3 is really about the highest it could see long term.

The most interesting thing I have taken away from this event is the Pro Tour winning Miracle deck. From the whisperings, I expect variations of this deck to make it into Standard, but it’s unknown what exactly that might look like. From my own brews I expect it to be a mix of Miracles and Planeswalkers with a Tap-Out Control style of play.

Standard Season has begun and the first big rush of PTQs is beginning. What cards are worth speculating on right now? If the Star City Games circuit tells us anything from last week, there’s still tons of Delver and R/G aggro in the mix, as well as the new R/W Humans deck that breached the top 8 two weeks in a row. It’s been a while since we’ve seen a Standard Control deck at the top 8, and that never lasts long. What would a control deck have to look like to survive this metagame, and what are the tools that stand to gain the most value from this shift?

There are three paths I could see this going. 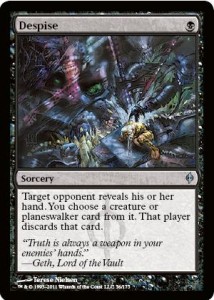 To deal with the Ramp and Aggro decks we need tools that are effective against both. I’ve been recommending hoarding Despise for almost a year, and it’s approaching payoff time. Despise pre-empts a Primeval Titan, while a Mana Leak no longer can thanks to Cavern of Souls. It also prevents Strangleroot Geist from utilizing Undying, and and stops a Geist of Saint Traft from making Angels.

Other disruption options include Appetite for Brains, which is so narrow I only expect it to see minimal Sideboard play. Other options include Nevermore, Phyrexian Revoker and of course Liliana of the Veil. While I don’t think Liliana of the Veil is amazing at combating the strategies the control decks will face, it will likely be a piece of the puzzle, and the piece that stands to gain the most.

She’s fallen as low as $20 on some retail sites, and I expect that to climb back up to the $25 range through the season. Despise has the highest percent gain potential, as it could easily see $2+ and is currently only $0.50. Nevermore and Revoker are less exciting to me, but you’ll want to have some of your speculation money in this category in one form or another.

Personally, I’m switching modes from slowly picking up Despises in trades, to actively buying them if I can find a playset under $1.50. Liliana has moved off my “Watch” list, and I’m actively buying it at $20. By the time middle of the season hits, I hope to have 100 copies of Despise to sell at PTQ’s. The Liliana’s will be piece by piece, and if the price inflates I’ll move them out slowly. 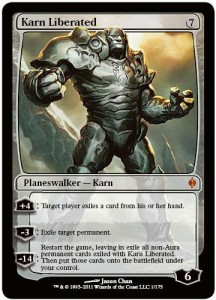 The other option for control is to simply go over-the-top of their opponents. This has long been a buzz word in Magic Theory, but we’re really talking about playing a spell that is so much more powerful than what your opponent is doing, that it makes up any advantage they’ve made during the early game. Cards like Karn Liberated, Temporal Mastery, White Sun's Zenith, Entreat the Angels, Blue Sun's Zenith,Griselbrand, [card Gisela, Blade of Goldnight]Gisela[/card] and Gideon Jura are all examples of this. The problem is, when your opponents are casting Titans, there’s not much more over the top you can get.

The Control brew I’ve been working on plays many of the cards listed in this category, and the one’s I think are in a good place to gain are Blue and White Sun’s Zenith. Both can be bought under $.50 retail, and if they begin to see any regular play they should more than double their value. Ideally, you’d want to see at least $1 profit to cover shipping to make this worth while. I’m not quite ready to pull the trigger too deep on these by buying online, but targeting them in trades is a fine plan.

The card I’m up to 25 of in my personal stash (and climbing) is Witchbane Orb. While the Orb doesn’t go over-the-top itself, it protects you from all sorts of detrimental effects that prevent you from getting to your 7 mana spells (like Despise, Shrine of Burning Rage or Zombie triggers). This card will be a 2-3 copy board plan in any tap-out style control deck. At bulk price, it is a minimal risk, and if the Block Constructed is any sign about the future of Standard, it will be seeing tons of Sideboard play in the fall. If it doesn’t spike up during PTQ season, I’ll wait it out until States this fall. 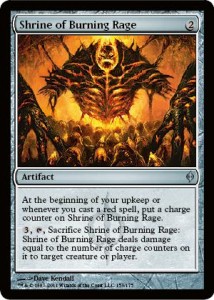 When I was learning to play guitar, my instructor would have me do fingering drills. “Now do it faster, and more accurate.” It didn’t matter how fast or accurate I was, there was always the possibility to be faster and more accurate. Same goes for Standard. An all-in RDW deck may be able to steal some weekends at the PTQ circuit as long as decks are ill-equipped to deal with it. With access to Manabarbs RDW has the ability to shut down Ramp decks, and can simply out race Delver with Stromkirk Noble and Stormblood Berserker. It can also fight control decks with Shrine of Burning Rage. My recommended pickups in this category are the Noble and the Berserker.

Noble is under $3, and could see peaks of $5-6, while the berserker is under $1 and realistically could hit $2. The berserker is the riskier play, because it rotates in the fall (unless it’s reprinted this summer, which isn’t likely due to it having bloodthirst) and Stromkirk is a bit safer. Typically after fall rotation hyper aggressive Red decks shine while people figure out the new format. At the least the Noble will be played heavily at that time, if it doesn’t spike for Standard Season this summer.

What to do about it?

Picking your favorite of the above categories is not the best route to go. I’m strongly in the stance that the “Over-the-top” control is the way to go this summer, but I’m not going to put all my eggs in that basket. You want a strong selection or two from each category where any single winner will cover the lost shipping costs of the ones that don’t gain. Further, we want to be targeting cards in each category that don’t have a huge risk of losses. My speculation profile is going to include: Despise(<$.50), Liliana($20), Witchbane Orb(bulk), Karn Liberated (only $11 really??), Gideon Jura ($6?!?), Shrine of Burning Rage($1+) and Stromkirk Noble(<$3). As the season proceeds I’ll talk about when is the good time to get out of these cards. If there are other cards to target in these categories I haven’t mentioned, discuss them in the comments below!

3 thoughts on “Insider: Next Leveling Standard”