There were about a dozen of us crammed into the kitchen, each holding the sinful mixture of caffeine and alcohol that comprises a Jagbomb. Somebody jumped the gun on trying to drink their shot and was immediately cautioned to stop. Geoff Pederson raised his voice and glass in unison.

“In this group we drink to one thing and one thing only.”

Those of us in the know nodded approvingly.

The night before Grand Prix Minneapolis I laid the Naya Pod deck I had been working on in front of me. The deck was strong, but awkward. I had lost games for my lack of ability to reach four mana and from drawing too many of my 30-odd mana sources. I really wanted another two-drop but the format was a bit shy on creatures that my deck wanted. I wondered how embarrassing it would be to play two copies of Porcelain Legionnaire.

My train of thought was derailed when I realized that I had no way of getting to Minneapolis in the morning. I knew a fair number of people that were going but I lived on the opposite side of the cities of all of them.

I posted my dilemma on Facebook, hoping that somebody could come to my rescue. 10 p.m. the night before was a bit late to be working out travel arrangements, but my friends came through for me. I was contacted by Dana Kinsella and Jared Brown both offering to go well out of their way to pick me up.

The next morning Jared was at my place bright and early and we were on our way. He wasn’t even playing in the event.

After struggling to find lands on a heartbreaking mulligan to five, my round seven opponent extended his hand and signed the match slip. With three losses he was now out of contention for day two.

“Well, I guess it’s time to head back to Fargo.”

I hate playing on the bubble. Even when you win you are the bearer of someone else’s bad news.

“Sorry about that man. It’s never fun when you don’t even get to play. How many people do you have in your car?”

“Thanks. It was nice to meet you.”

“It was nice to meet you as well.”

“You know this is the Legacy GP, right? You came all the way out here to not play in it?”

“So what are you going to do?”

“Uhhh, drink? I just want to have a good vacation and hang out with you guys.”

It was vexing to me how somebody could pass on playing a Grand Prix when it was right there. A Legacy Grand Prix at that. The purest, most beautiful way to play Magic.

Of course, my perspective was a bit different than his. I was unemployed and needed to place well to make traveling for Magic viable. He was traveling to take a step back from the pressures of the real world.

I spent the majority of the event playing on the bubble and barely managed a top 64 finish. I made some plays that I was proud of but also had to deal with a lot of tilt to get there. I mean, I lost to Mono-Red, for Heaven’s sake.

He spent his weekend relaxing and enjoying life.

My trip was on the whole enjoyable, but his trip was wholly enjoyable.

I wasn’t about to stop playing tournaments, but his A Plan made for a marvelous B Plan.

The next weekend he again declined to play the GP in Nashville. I scrubbed out very quickly and soon after got busy enjoying the scenery. I lost every match I played without once being impressed by my opponents.

Even still, I wasn’t even remotely upset with this outcome. I was just thankful to have friends on the ready for adventure.

My opponent played his sixth mana source and slammed an Inferno Titan. The big red man left my board position in an embarrassing state.

The Zealous Conscripts in my hand taunted me. Threatening his Titan wouldn’t be terribly relevant with my opponent still on 20 life.

“It’s not the kill you Titan, but still pretty good.”

I was fortunate enough to peel an Oblivion Ring off the top, but I still had to find a way to start getting damage in. I passed the turn after RFG-ing his Titan and my opponent laid down a second.

“That sucks man. He just Terminused you like three times.”

“The BS miracle deck is, by definition, BS.”

It’s true that it feels bad to lose to variance - more so a deck dedicated to rolling dice - but losing games of Magic was hardly anything new to me.

“Sometimes you run bad. There’s not much more to say.”

It was the final round of Pro Tour Nagoya. The winner of my match would certainly money and possibly top 50. At the time, this meant qualification for the next Pro Tour. The loser would finish outside of the money.

I was comfortably sitting at 20 life with a two-turn clock set up against a Mono-Red deck. The only relevant play my opponent had made up to this point was an early Shrine of Burning Rage.

I was right in believing that one of the players would be dead in two turns, but I had incorrectly assessed which it would be.

My opponent untapped and pointed a Red Sun's Zenith for six at my dome. He passed and I spent my turn attacking him down to five. On his final turn he aimed two Galvanic Blast and a Volt Charge at me. Suddenly his Shrine was lethal and, wouldn't you know, he had the eighth land.

Two games later and I was being murdered by a Kuldotha Phoenix wielding two Swords.

After the match I sat at the table for a good five minutes, alone with my thoughts in a room full of people. I had just spent hundreds of dollars that I didn’t have to spare traveling to Asia and I was going to return home empty handed. 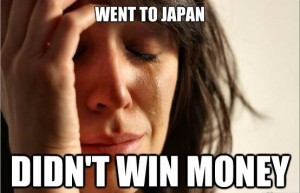 My self-pity party ended abruptly when I took a second to think about where I was. It was easy to sit there and brood, but I was at the tail end of the most anticipated vacation of my life. To allow myself to continue to tilt would be an egregious disservice to myself.

Later Forrest Ryan, Kyle Stoll, Matthias Hunt, I and a cheap bottle of sake went out for a much-needed night on the town. We had a spectacular time.

It would have been easy for me to project my negative experience onto them, but what would be the point?

Expressing regret and disappointment are fantastic ways to waste your life.

“So where are you from?”

“I imagine you came out here for more than just the GP.”

“No, I just graduated so I came out here for this.”

Here was a man that had traveled half-way across the country just to play in a Standard GP. I could hardly be upset when he beat me, even if I hated his deck.

“Playing this deck I’ll need it. It’s kind of goofy, but this is the most fun I’ve had playing Magic in a long time.”

“That’s really the most important thing.”

Nine rounds of Magic can leave a person pretty exhausted. With a 6-3 record I didn’t make the cut for day two. I went to find my friends to tell them the bad news. This wasn’t too difficult considering that we were all wearing our extremely vibrant pink polos and could easily see one another from any point in the event hall.

I approached the group and gave them a big thumbs down. This was met with applause by them.

“Alright! Overturf’s partying with us!”

I held back a smile and let out a sigh.

“You guys are the worst.”

Some people would be upset about not making day two. More people would be insulted that their friends applauded their failure. I'm not one to get worked up about these things. Odds are I would’ve quit Magic by now if it wasn’t for them.

I love those jerks.

5 thoughts on “Singing out of Tune”