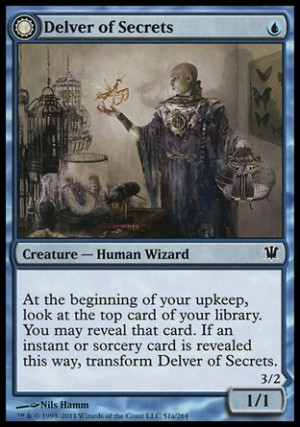 When the best deck gets even more awesome cards, bad things happen to good formats. Recently there has been much talk about the upcoming banned and restricted announcement from Wizards and what impact it will have on Standard. Many are crying that the format is broken.

Wait a minute. This sounds strangely familiar. Are we talking about last year or this year?

Sadly, we are talking about both.

Before last year, it had been nearly ten years since a card was banned in Standard. Before Jace, the Mind Sculptor and Stoneforge Mystic, the previous banning was all the way back in the original Mirrodin block when lots of broken artifacts were banned to stop Ravager Affinity from destroying competitive play.

This year the culprit is less identifiable. Some notable pros think the problem is Delver of Secrets due to how far this creature was pushed. Others think the invitational card Snapcaster Mage is too powerful for Standard to handle. A small number of players think Vapor Snag is a problem, but Unsummon has never been too good in any format.

Finally, some people feel the real offender is Ponder. This cheap tool helps stabilize any deck it's included in. One of the main reasons that I played blue mana in my Wolf Run deck was because Ponder makes every draw smoother.

I don't think banning any one card will be enough. If I had my say, both Snapcaster Mage and Ponder would be removed from the format. If Snapcaster is allowed to remain, we can welcome another year of finding degenerate ways to use the Yawgmoth's Will with legs.

If we did not have Snapcaster Mage and Ponder to constrict the format, I think we would see more diversity. Decks that have been present would see more play and room would be made for new decks to be viable once more.

The Problem with Cheap Cantrips 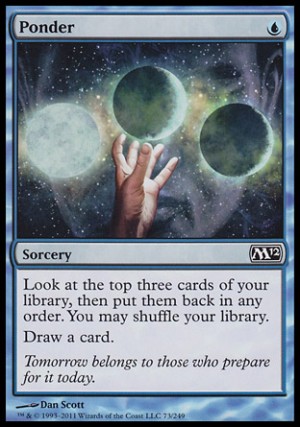 With all the talk about bannings, I have thought a lot about Ponder. Why do cheap cantrips like Ponder, Preordain and Brainstorm have such a big impact on games, always bordering on the edge of overpowered?

First of they are a one-mana method to search for combo pieces. This effect was too powerful for Modern because it allowed players to easily assemble a winning combination of two or three cards.

Another reason is that they add consistency to tempo-oriented decks. Delver decks include a number of cards that are extremely good in certain matches and horrible in others. Ponder allows them to draw the right cards when they need them and shuffle them away when they are subpar.

This is a problem because it makes room for the aforementioned variety of cards that can make every matchup positive. When was the last time you saw a twenty-two land deck capable of casting a six-drop? Thanks to Ponder, Delver can sideboard into Consecrated Sphinx, a card that's normally off limits to a deck with so few mana sources.

The emergence of Angel Delver is causing so much drama right now because of the high density of large tournaments this summer. We are in the middle of a PTQ season dominated by one deck. We also have three World Cup Qualifier tournaments, as well as the independent circuits across the U.S. organized by Star City and TCG Player. Between all of these events, the Delver menace is getting a lot of attention.

My thoughts have been focused primarily on the World Cup Qualifiers. At the moment, I know of no deck that can compete with the Angel Delver deck well enough to justify playing. But that doesn't mean I'm giving up.

When trying to beat a specific deck, you need to determine what aspect of the deck you are trying to attack. One possible avenue to beat the current iteration of Delver is to make Vapor Snag as bad as possible.

We can accomplish this goal by playing creatures with shroud or hexproof ourselves. I mentioned a couple weeks ago how good Dungrove Elder is against decks trying to gain tempo with Vapor Snag. Ever since I lost to the Dungrove Elder deck in the win-and-in at the PTQ, I've been thinking about how to build that deck.

Here's where I am so far:

What does this deck do well? It's very aggressive and its threats are hard to interact with. Green Sun's Zenith is a powerful spell that really shines in this deck. Dungrove Elder is a huge beat stick that also clogs up the board.

Since there are so many creatures that can't be targeted by your opponents, Prey Upon seems like an efficient way to deal with most threats in Standard. You can often kill titans because Dungrove Elder is larger. Prey Upon with Strangleroot Geist is profitable as well.

This deck is able to abuse Abundant Growth to play red cards in a monocolor deck and trim lands since it is a cantrip. Bonfire helps dramatically in almost every match right now and Garruk, Primal Hunter will draw you a ton of cards late in the game so you can finish off your opponents.

Overall Dungrove Green is a decent way to fight Delver. Get it, fight? Because you use Prey Upon to kill their Delver of Secrets?

Bad jokes aside, this angle is a good way to attack Delver decks while not falling flat on your face against the rest of the format.

My main problem is that Thrun the Last Troll goes from all-star to shouldn't-even-be-on-the-team depending on whether or not your opponent runs Phantasmal Image or Phyrexian Metamorph. There is no way to know which decks will play these cards either. Some Delver decks have them maindeck, some have them in the sideboard, and some have zero copies in their seventy-five. Thrun is excellent but he may be too much of a liability.

With one of that deck's key cards surrounded by uncertainty, I have also been working on another deck. Last year when Caw-Blade was destroying tournament after tournament, my answer was R/B Vampires. Recently I have been wishing for those cards to return to Standard. Since that is not an option, I decided to explore a similar concept with the current card pool available in Standard.

Initially I thought Zombies was the second coming of Vampires but when that turned out to be far from the truth, I abandoned the comparison. For the task of porting Vampires, the logical place to start was with Zombies. Since Gravecrawler came out, I have tried a variety of versions of the Zombie deck. I didn't like any of them.

I started this new project with one central idea. What if Geralf's Messenger isn't actually good enough? We have been operating under the assumption that any deck with Gravecrawler must also include Messenger. My idea was that this logic is flawed.

As deck builders, many times we get stuck running certain cards together that we never stop to consider if it is the correct decision. Geralf's Messenger forces the Zombie deck into heavy black in order to manage the triple-black mana cost. This restriction greatly limits the other cards you can play alongside it. By removing that restriction, we open ourselves up to a world of new possibilities.

The primary interaction I wanted to exploit was Lightning Mauler as a turn two haste creature. Lightning Mauler reminds me of a scaled down version of Fires of Yavimaya. Attacking for four damage on turn two seemed like a fast enough start to look into. I also wanted to try a few other cards that haven't seen a lot of play recently.

As you can see, this is not your typical Zombies deck. After all, there are only eight actual zombies. This version turned out to be closer to Red Deck Wins with a few black cards.

Classification is less important than concept though. This deck does exactly what I wanted it to do. Number one, it is fast. Often you will play a one-drop creature and then on turn two either kill their creature or play another threat. The removal in this deck is specifically designed to be good against the threats the format presents.

I especially like Vexing Devil, though I would probably never play it on turn one. It's better on turn three because you can follow it up with Lightning Mauler and give them both haste. That trick may only work once per match, but you probably won't draw both pieces more than once anyway.

This deck is equipped with early aggression, a lot of disruption, and tons of burn to finish off opponents quickly. It may not be the best deck you have ever played but it is aimed at defeating a specific metagame.

I hope these two deck ideas start the wheels turning for you. There are options available that can lead to success even in a broken metagame. By exploring underused cards, we can come up with something new that players are not prepared for. These angles of attack force your opponent to answer threats they did not prepare to face.

Have you been attacking this format from a different angle? Post your decks below to continue the conversation.

Unleash the Rogue Force on Standard!

4 thoughts on “Attacking a Broken Format”