In a coincidental stream of events, I managed to attend Star City Games Worcester (pronounced like Rooster with a “W” for whatever reason) this past Saturday. My mother-in-law was in town visiting my three month old son and my wife, freeing me up to get away for a few hours. Since I live only one hour from Worcester, I decided to check it out. 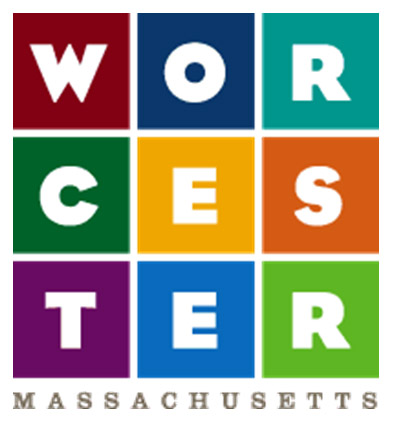 The main purpose of my attendance was not to participate in the main event. While only my second time attending an SCG open, I already had enough data to know I was ill-prepared to play in the now $40 entry tournament. I’d be better off betting $40 on the long shot racehorse at the Belmont Stakes, which also took place this past weekend.

Instead, I attended this Star City Games event with three primary purposes. First, I hadn’t played a game of Magic since my son was born and so I was desperate for a game of EDH. Second, I was interested in doing some trades in an attempt to refresh my binders. Third, and most importantly, I planned to sell some cards to Star City Games at their buyers booth.

I know this is a finance column, but I would not be doing myself justice if I left out this significant portion of my experience. Three of us sat down for an epic battle of entertainment. Although there were three players, the only general to be cast was Vendilion Clique as the others, including my “fun” general Jerrard of the Closed Fist, were never once cast.

The game’s board state quickly become complicated and hilarious at the same time when cards like Psychic Battle, Shimmer and Confusion in the Ranks all had their dramatic impact on the battlefield. If you haven’t had a chance to play these cards in an EDH deck, I’d strongly encourage it. 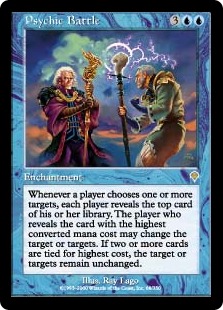 Summing up the important turns, damage was sparse until a combination of Titanias Song and Ixidron created a dozen face down creatures on the board. Soon after, the victor used [card]Tibalt, the Fiend-Blooded]’s ultimate ability to kill the other two players simultaneously.

I stopped by the trade tables tentatively, feeling a coat of rust on my once-sharpened trading skills. It had been months since my last trades and a wave of doubt passed through my mind. Were it possible my prices were obsolete? What sites were people using to establish prices nowadays? What was the latest Standard tech?

Turns out none of this mattered.

It may come as no surprise that my Zendikar Fetch Lands received a lot of attention. People truly view these cards as cash. Whenever value needed to be made up in a trade, people were always willing to take these on.

I need to come clean and admit – I refused to trade them every time. In each case I found myself preferring the Zendikar Fetch Lands over whatever it was I was trying to trade for. Cash is king, and these Zendikar fetches are equivalent to cash in nearly every way.

Despite my resistance to trade the fetches, I did manage to complete a few trades. Modern season is on its way and that was evidenced by what people were seeking. I was pleased to move my promo Cryptic Command, considering I failed to sell the card on MOTL even at $10. Also traded away a Dual Decks Elspeth, Knight Errant at a surprisingly high value. Either these are on the rise or some people don’t recognize there is a reasonable value difference between the Dual Decks version and the far-superior Shards of Alara printing. Noted.

Finally, I also observed another interesting trend – people’s perceived value on Innistrad Dual Lands varied significantly. In one trade, my Sulfur Falls were valued close to retail, so I regrettably let them go (most of you know I’m accumulating these). The next trade partner proceeded to trade me his copy of the card at closer to auction prices.

Lesson – it seems not everyone respects the upside potential on Innistrad Duals (besides Isolated Chapel). Maybe I’m going about this all wrong. Instead of buying these on MOTL, maybe I should be trading for these more frequently.

Innistrad Planeswalkers seemed avoided, at least from my perspective. I only own one Liliana of the Veil and one Garruk Relentless // Garruk, the Veil-Cursed at the moment, but they sat on the front page only to be skipped repeatedly. These appear to have momentarily fallen out of favor. Even Star City Games only offered me $10 on the Liliana, which I promptly rejected (more on that later, chart courtesy of blacklotusproject.com). 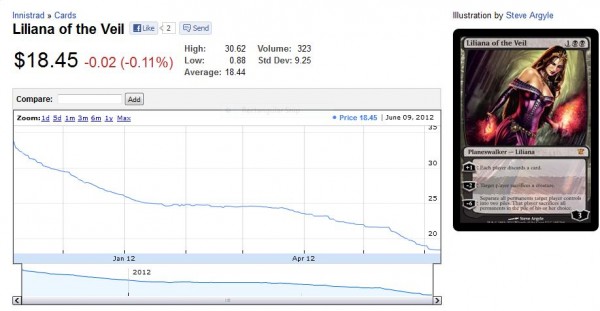 These once hot cards are likely overshadowed by flashy Avacyn Restored cards such as Bonfire of the Damned. That being said, no one asked about my two Restoration Angels, either. Perhaps people feel those are overvalued and, as such, didn’t bother to inquire about them? Surely they will see plenty of Standard play.

Lastly, I’ve decided to completely abandon my Merfolk cards. The deck had its day in the sun once upon a time. But after having the pieces of this deck sitting in my trade binder for a year with no interest, I bit the bullet and sold the Merfolk cards to Star City Games for quarters on the dollar. I am not ashamed of the decision.

My Sales and, More Importantly, Why I Sold

I saved the best for last in this article – I want to review the cards I sold and why I decided to let them go at Star City’s buy price.

The easiest decision was to sell my two Firestorms at a solid ten bucks each. For whatever reason, Star City Games is having the darndest time finding these and so they’ve upped their buy price to above auction prices. I purchased those two cards for $9 just a week earlier and while an 11% profit is nothing to write home about, it’s virtually free money with no effort. I couldn’t even move these for $10 on eBay once fees are considered.

I also admittedly sold two of my recent Alpha purchases – a NM Two-Headed Giant of Foriys for $60 and a MP Island Sanctuary for $30. I made a solid $17 profit between the two and I learned a valuable piece of information: Star City Games is willing to negotiate on Alpha rares, even if played. In this case, the buyer asked me what I wanted on the Sanctuary. Knowing I paid $17 for and they were paying $60 for NM copies, I asked for $30. The buyer snap-agreed. 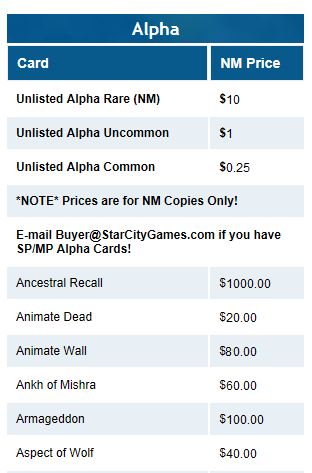 Other notable sales were my MP Vampiric Tutor for $12 (which is what I paid) and an assortment of $1 and $0.50 cards. These are a pleasure to unload since it’s not worth selling them on MOTL or eBay and shipping them to SCG in a mail-in is not worth shipping costs. I also sold 2 Spindown Dice for $2 each because… why not? I had six of them and I have no attachment to any of them. A nice little bonus.

Finally, I decided to sell my Karn Liberated for $8. While the card has sustained its value surprisingly well, it should be due for a price drop once Standard rotates and I did not want to be left holding this one.

On top of the fun I had at SCG Worcester, I also gained some valuable information. I learned what cards are generally easier to move and which ones are seeing less interest. I also got a sense for which cards Star City Games was aggressively buying (Alpha rares, Firestorm).

Just as important, I learned which cards Star City Games was not offering even half of auction prices. This includes Innistrad Duals (maybe they feel they have enough?), Liliana of the Veil and even Chrome Mox. They either have excess of these cards or they feel they are destined for a price drop.

One of the most valuable pieces of information I learned was Star City’s willingness to negotiate on Alpha rares, especially in person. It was reassuring to see that my hypothesis on their buy prices, that they would buy played copies for roughly 50% of their NM prices, held true. This will be a valuable rule of thumb to implement when shopping for played copies of Alpha rares.

Lastly, I learned that Magic: the Gathering is still a fun game to play for me. This is a hobby I intend to maintain for years to come. Noted.