Last weekend I went to Indianapolis for the Star City Games Invitational and I have a lot of info to relay about it. I also dug up a few gems for you, so let’s get down to brass gnats.

Is Griselbrand warping Legacy enough to warrant a ban? We’ll know tomorrow for sure, but in the meantime all we can do is speculate. I will get into the results of the Legacy events in Indy at the end of the article.

Are “cheaty” decks like Hypergenesis, Reanimator and Sneak and Tell seeing more play in Legacy? Certainly, just as they did when Emrakul was printed.

Are these decks dominating the top 8s of multiple events? Later I will reveal how many copies of Griselbrand were in the top 8 at the Legacy events in Indianapolis. The number may surprise you.

While many are calling for Gris’ head, I take a more reserved tack. I don’t prefer bannings, emergency or otherwise. They admit to a fundamental failure on the part of Wizards to predict the effect of a card or archetype on the format, and I believe they should be used as a last resort. The “future future” league employs some of the best innovators from the history of the game, and if they didn’t see Griselbrand ruining magic, there are two possibilities.

I tend to err on the side of “let’s innovate” and not “OMG this sucks they need to ban it and every card that shares a creature type with it!”

The “like OMG so oppressive” dredge decks of yesteryear are easily dispatched with the application of a simple Tormod’s Crypt or Leyline of the Void. Gris decks can be managed likewise. And not merely managed; greedy decks like those are wrecked by hate cards. Dredge is all-in, and after you crypt their stuff away they aren’t left with much of anything.

Similar strategies are already being adopted to answer broken decks like Sneak and Tell, which is all-in on the ‘brand plan. You can easily put this deck in topdeck mode with a Gilded Drake to steal Gris, Humility to make him hilarious or Wipe Away to send him packing (unless they are using Sneak Attack, most players will pass priority after cheating out Griselbrand hoping to bait out a Swords to Plowshares or Go for the Throat).

My prediction is that when the dust clears, Griselbrand decks will be simply another part of the metagame. They are getting a lot of play because they are new, not because they are the best. Easy to hate out, fragile and greedy, these decks promise quick wins and also many games where you just can’t draw right and aggro caves your face in.

Worth a quick mention is the impending possible ban of Ponder and/or Snapcaster Mage. I fully expect Ponder to be banned tomorrow although I won’t be surprised if it’s Snapcaster Mage instead. Although Ponder is flipping Delvers and making shaky hands keepable, its days are also numbered — its omission from M13 means it’s rotating soon. Snapcaster Mage could warp the format for years. These are likely the only two cards on the chopping block.

This Week on the Web

The thread is at this link

This is worth reading through. There may be some gems you’ve forgotten about. A lot of work goes into flavor text and it’s nice to take a second to go back and appreciate how good it’s been over the years.

Special thanks to Captain_Zavec for getting the conversation started. 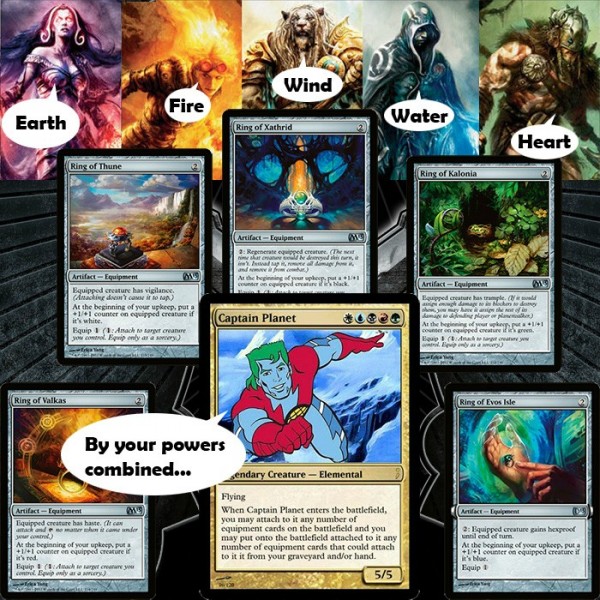 Be careful not to summon the Don Cheadle Captain Planet

Joystick_Genie was reminded of another cycle of colored power rings from his childhood. I personally think if you get all five rings on five creatures of the appropriate colors it should summon Progenitus. After all, Progenitus is a hero. Gonna take their life down to 0. Right? Like in the song? Ok, then, moving on. 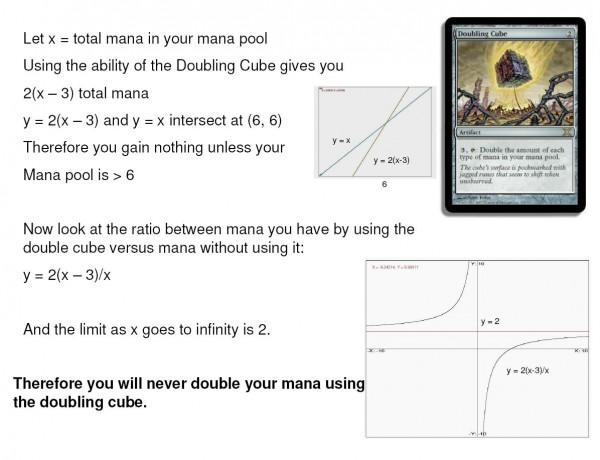 Math genius HarlequinNight brings us this hilarious mathematical proof that Doubling Cube can never double your life total. What a buzzkill! 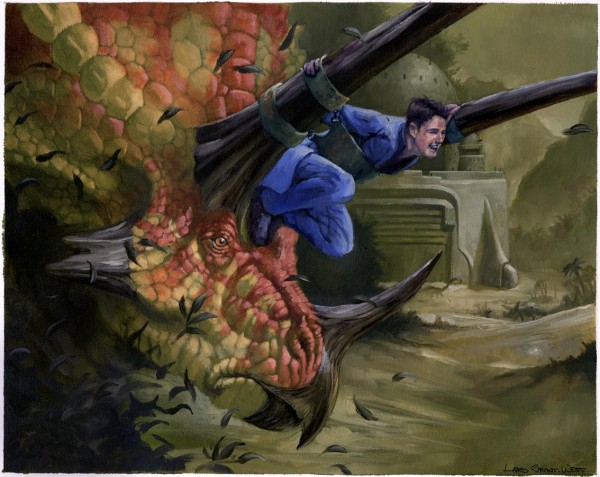 Redditor eegan1220 grew up next door to Magic artist Lars Grant West and shared with us this terrific custom painting featuring him as a triceratops commander. Too cool!

The conversation it spawned is also worth reading, found here

It was an all-star turnout in Indianapolis.

All 3 do work on commission and are worth checking out.

I am Become Mind Sculptor, Warper of Formats

Half of the top 8 was U/W delver, but considering the structure of the Invitational, it’s hard to tell if those players simply 2-2’ed the Standard portion and 4-0’ed Legacy on day one. Still, U/W was a significant portion of the field and it seems like a good choice for strong players. Things may not be looking great for Snapcaster and Ponder.

Lauren Nolan, who took the whole thing down, chose Delver for the Standard portion.

Hetrick’s RUG Pod is a good choice to look into if you don’t want to flip delvers in the next few weeks. I saw Hetrick make some very tricksy plays with this deck. One of these consisted of casting Zealous Conscripts, stealing an opponent’s Restoration Angel, podding that into another conscripts to steal another angel and swinging for the win. This deck has all the tools you need to take the format down and I think is a good choice.

U/W Midrange also made a splash and is a deck to watch out for.

A true lover of Delver of Secrets, Nolen took down the Legacy portion with RUG Delver.

Only eight [card Griselbrand]Griselbrands[/card] in the top 8 of this event. No Sneak and Tell, no Hypergenesis, just two Reanimator decks (arguably the least unfair deck to cheat in creatures). Is the format ruined? People seemed to be the most afraid of decks like Sneak and Tell, but where are they? Zero in the top 8 and only two in the top 16. Warped format?

It’s hard to tell from Invitational results, so let’s delay the verdict until we analyze the Open results.

Players in the Open made some different choices. Only one U/W Delver managed a top 8, the same as the number of U/W midrange decks. In fact, there were eight different decks in the top 8! That seems like a healthier format than we’d thought. RUG Pod makes another appearance, piloted by Michigan’s Josh Glantzman who managed a top 8 in both the Legacy and Standard Opens. Nice job, Josh!

The Legacy Open was won by … Goblins? Other than Stingscourger, I don’t see many ways to deal with a Show and Tell’d Gris. Packing four copies of Cavern of Souls and a suite of cheap, efficient beaters, Goblins is back, baby! With Mental Misstep a distant memory, one-drop-heavy decks are starting to reemerge. Great job Brad Campbell!

Merfolk also managed a top 16. Maybe in a format skewing toward pseudo-combo decks like Sneak and Tell, fast, efficient beaters are the play. Any amount of disruption can foil your opponent’s plans, and anything short of a nut draw from Sneak and Tell can’t race decks like Maverick. In a format where people are eschewing Progenitus in favor of Griselbrand, Maverick is a much better choice as Karakas smokes [card Emrakul, the Aeons Torn]Emrakul[/card] and Griselbrand whereas Progenitus merely laughs it off. Crop Rotation is great sideboard tech right now to make sure you find that Karakas and never take damage. Maverick is more than capable of handling Sneak and Tell, which accounts for the lack of Gris decks in the top 16 of the Legacy Open.

A format warped by Griselbrand? Hardly. Even players who weren’t ready for it (and a top 8 that all said the deck they feared most was Sneak and Tell) handled Gris decks easily. I think Griselbrand is stupid powerful, and in a format with Necropotence and Yawgmoth’s Bargain on the banned list, has even more potential for abuse. However, the results from this weekend, which were supposed to show how unfair Griselbrand was, did not.

Griselbanned? I doubt it very much.

Take it sleazy, speculators. Thanks for joining me this week, and check this space next time for more of what’s good in the world of MTG.

Also check out the episode of Brainstorm Brewery we recorded from the road in Indianapolis that should go up later this week.

Don’t do anything I wouldn’t do.

And if you do, pics or it didn’t happen.