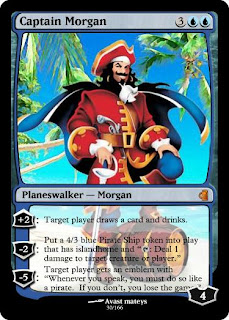 Booze Cube Comprehensive Rules: 202.5. Taking a shot is a special action and does not use the stack.

Cube drafting has long been a staple of many Magic circles. You'll find people Cubing at almost any large Magic event, as well as at casual tables in your local game shop.

I've built my own Cube, encouraged others to build theirs and have played with powered, unpowered, pauper, multicolor only and DCI foil only Cubes. However, I was recently introduced to the concept of the Booze Cube when I heard about it on The Eh! Team Podcast: http://manadeprived.com/the-eh-team

The Booze Cube is a custom created Cube intended to be added to an existing cube and used as a drinking game: http://theboozecube.blogspot.com/

I think it goes without saying that there are some Magic players in the community whom, after they scrub out of a tournament having traveled to, will drown their sorrows at local taverns or karaoke bars. As a compliment to the ubiquitous "drunk draft", the Booze Cube offers unique Magic gameplay injected with instant fun and sorcery speed intoxication.

If you are unaware of Turquoise Jeep records then do your self a favor and:

For this party, I decided to print up the Booze Cube proxies and prepare to Booze Cube at the party. The print sheets can be downloaded and printed http://theboozecube.blogspot.com/p/download-print-sheets.html

The original idea of the Booze Cube is to add the cards to an existing cube, but I got to the party early and wanted to see how the cards worked so my friend Geoff and I decided to 1v1 Winston just the Booze Cube cards.

I assembled some pretty awesome cards such as: 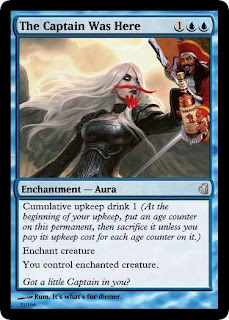 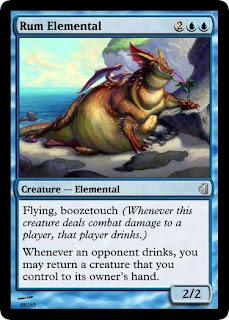 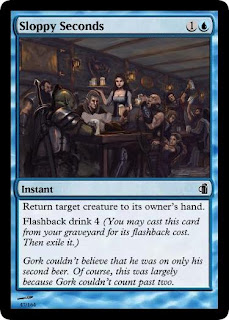 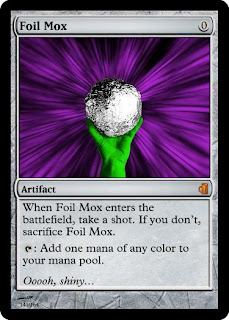 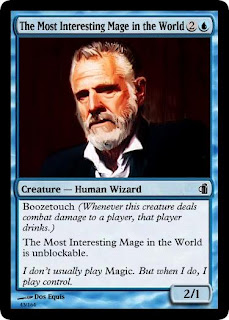 Meanwhile, Geoff had Enchanted me with: 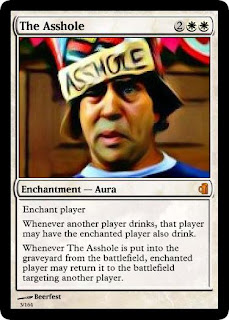 I beat him down a fair amount before he activated his: 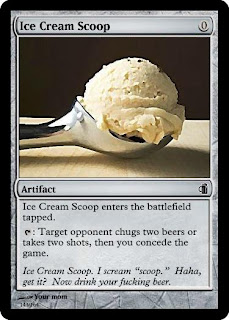 By this time more people had arrived, and interest in the game had peaked as Geoff and I were giggling with semi-drunk laughter at the fact that Morningwood Seraph has vigilance (it just makes so much sense). 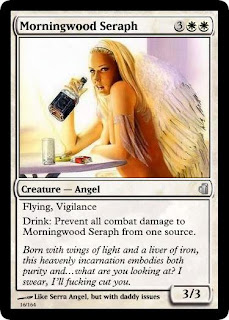 The Mechanics of the game are pretty straightforward. There are really only 4. Again, we consult the Comprehensive Rules:

200.1(a)(i). Drink. When drink is followed by an X, the specific number is undetermined. Like normal spells with X in their mana cost, X will take on a specific value when that drinking ability is put on the stack, and considered to have a value of zero when in other game zones. 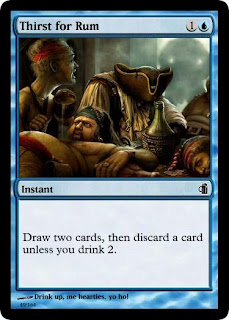 200.2. Boozetouch
200.2(a). When a creature with the Boozetouch keyword deals combat damage to a player, that player drinks. 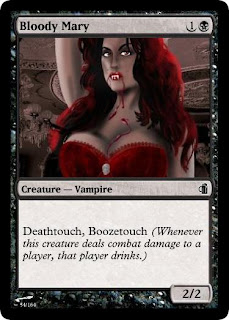 200.3. Intoxicated
200.3(a) Creatures that are Intoxicated deal damage to players in the form of drinks. 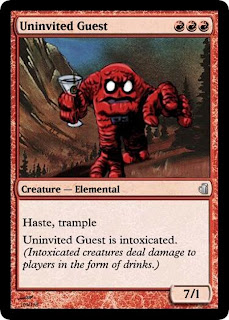 200.4. Drinkcycling
200.4(a) Drinkcycling is just like regular cycling, except that the cost to cycle is always drinking. 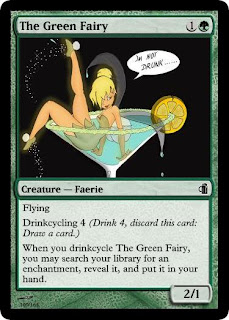 My friends Jesse and Martin decided to Winston and Jesse beat Martin with this combo: 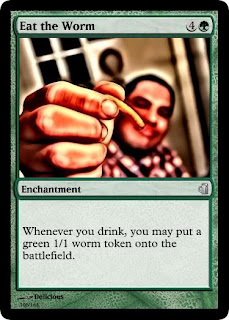 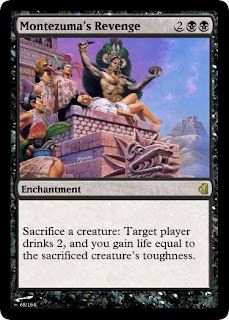 My Booze Cube cube had somehow missed some cards, so I only had 171 at the party, which means we would be 9 cards short of drafting 4 people. We decided to 4 man draft the Booze Cube cards (no real Cube cards) and play out the matches 2 Headed-Giant style. Whenever I 2 Headed-Giant, I always seek out Eric Hawkins. 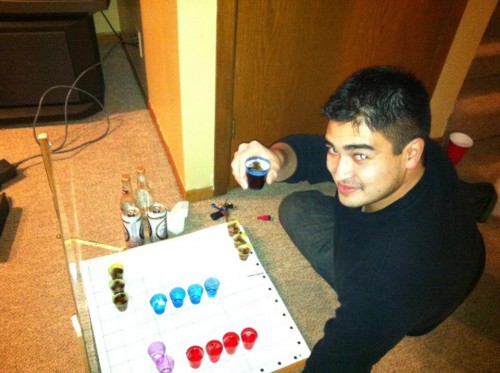 A story about why I love Eric Hawkins:

The most lucrative Magic tournament I've ever won was 2008 Minnesota 2HG Champion with Eric Hawkins. At the time we were sponsored by a now defunct website mnmagic.com. For unknown reasons, the owner and proprietor the website selected local Magic players and paid for their tournament fees in exchange for wearing sponsorship Tshirts and using custom playmats.

After several free PTQs and other events, Eric and I entered the (free) 2HG State Champs. It was Llorwyn block sealed, top 4 team draft. I don't remember our decks being anything special other than Eric was playing little UW Kithkin and Merfolk with bounce, card drawing and counterspells, and I had big dumb Treefolk with removal. We went undefeated in the Swiss, drawing into the top 4 team draft.

During the draw round we got some food, and discussed the draft. Neither of us had 2HG drafted before, but I knew some of the other players that would be in the draft and knew their affection for drafting and playing blue. I told Hawkins "I think we should avoid blue". When the draft started it really didn't matter, we didn't open any blue cards, and didn't really get passed any. I was setup fairly quickly with Elves and Treefolk, while Hawkins took WRu cards. My deck had 2 Imperious Perfect and Incremental Growth. Eric had Stonehewer Giant and some equipment that I didn't read or understand.

We made the finals and were playing against Dave Yetka and his teammate Ben Berryman. Yetka did not disappoint my previous assumptions that he would be playing blue. He was, in fact, nearly mono blue.

Eric and I built up a bit of an army, but Berryman's Treefolk eventually stalled the board and Yetka dropped Guile. With the board still at a halt Yetka played Brion Stoutarm. There was some clash trigger that revealed the Incremental Growth on top of my library - which I knew would be near lethal if it resolved. I also knew there was virtually no chance Yetka was playing a Guile without counterspells, and we hadn't seen any yet.

Hawkins drew Stonehewer Giant for the turn, as I drew my Incremental Growth. Hawkins leaned over to me and said quietly "I think we just won". I played my Incremental Growth, which got countered by Yetka's Familiars Ruse bouncing his Brion Stoutarm, making Guile a 9/9 and Berryman's treefolk even more formidable walls. Hawkins played Stonehewer and smiled as it resolved. A couple of turns passed without much more action - eventually at the end of their second turn after Stonehewer, it gets activated, tutoring up and attaching Diviners Wand to the Giant. We untap, the Stonehewer gets flying and attacks for the win after a couple pumps.

The prize was 1 full year of free events from basically every Tournament Organizer in the Midwest. A limit of one per day. A couple of weeks later I went to a GP in Indianapolis. Our sponsor gave us $110 stipend for the trip, and because my events were free, I got to pocket the money for the entry fee (which the sponsor would have paid anyway) for the grinder on Friday, the GP on Saturday (I scrubbed out) and the PTQ on Sunday. All the events were sealed and I got to keep the cards.

I did this for a year.

Surprise, Surprise, that sponsorship arrangement didn't last long and there is no more mnmagic.com.

A story about why I HATE Eric Hawkins

When I first built my (non-Booze) cube, it had a strong multicolor theme, and included a lot of mana fixing to support that theme. In one of the first cube drafts I can recall, I was playing against Eric and he played something like T2 Counterspell, T3 Woolly Thoctar, T4 Sign in Blood, T5 Plow Under. Eric doesn't really draft cards as much he drafts manabases. I've specifically added Magus of the Moon and Ruination, just because of the way he drafts my cube.

I hate him so much.

So, back to our 2HG Booze Cube draft. Its me and Eric versus our friends Jesse and Kyle. We finish our draft and I take a look at Eric's deck as he assembles it. I cringe because there's no mana fixing in the Booze Cube and the mana costs of some of his 3 drops are GGG and BBB. I roll my eyes and prepare to get mauled. 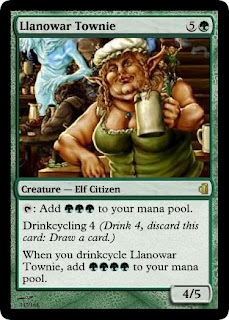 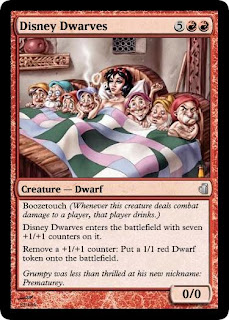 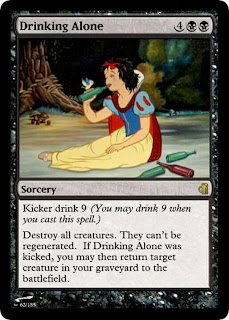 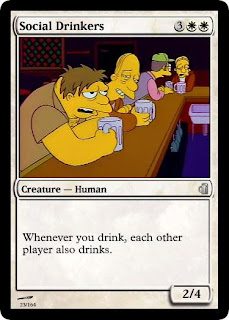 So, whenever Eric drinks, we all drink, except Kyle, who has to drink 2x what Hawkins drinks.
A creepy smile erupts on Hawkins face as he plays 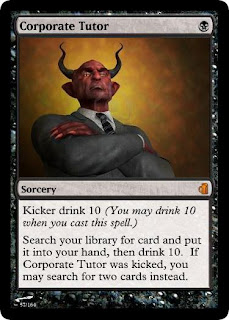 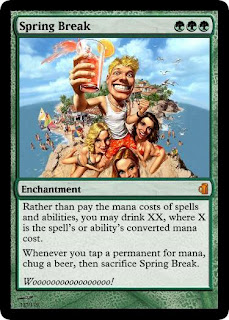 which allows him to drink instead of pay mana costs. He then proceeds to play 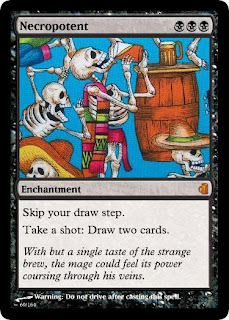 a bunch of other spells and then 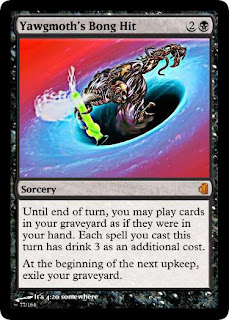 before he succumbs to death by alcohol.

I love Eric so much.

The Booze Cube is an absolute blast. My testing circle has started to design and implement some of our own cards. Our first one is: 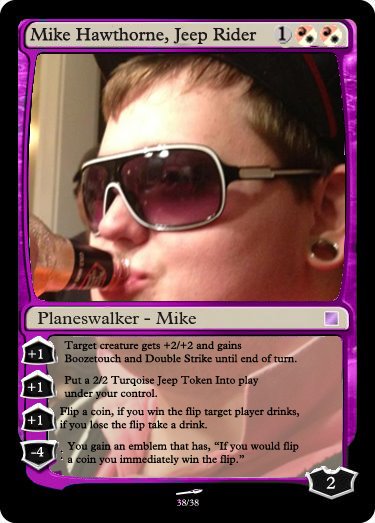 Mike notoriously does not lose coin flips for money, so this is an ode to that.

(And draft the lands, cause they're broken)