From time to time, I get an opportunity to help new casual players build their first Commander deck. I usually start by asking them what strategies they enjoy, what cards they brought to the store that day (or didn’t), and how much they are willing to invest to improve their deck.

Last week someone came in with an extensive collection of foil angels --Karmic Guide, judge foil Exalted Angel, Twilight Shepherd. Name an angel, he had it; if a foil was available, he had it. It was one of the most insane collections I've seen in a while. He had decided to build a mono-angels Commander deck to give some of those foils a home.

The first thing we established was that he wanted to be mono-white for thematic purposes. Between Selenia, Dark Angel and the three Avacyn Restored legends, you can play any two-color combination with an angel as your Commander. There aren’t many other non-white Angels, so a second color mostly just contributes utility spells.

The issue at that point is picking a Commander, but before we get too far, let's start with the list of angels headlining the deck that will form the bulk.

The important thing to recognize when you're building around giant, flashy, expensive angels is that your deck will be slow. For a lot of people, that may seem like a disadvantage that cannot be overcome, but that's not true. It's fine for your deck to be slow as long as you prepare adequately and set up your deck to make games go longer.

This means sweepers, lifegain and resilient creatures will be the bread and butter of a deck like this. The suite of angels accomplish all three of these things. 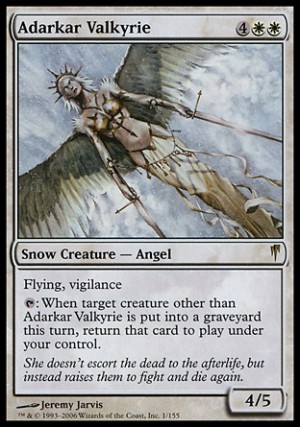 That's a lot of angels, many of which provide utility effects to drag games out. You have lifegain from Lightkeeper of Emeria and Battlegrace Angel; resiliency from Karmic Guide and Adarkar Valkyrie; and even a creature sweeper in Sunblast Angel and an acceleratnt in Herald of War.

Really though, all of these angels were going to be played one way or another. There were only really two questions that needed to be answered. First, who should the commander be? Second, which angels can be cut if they aren't pulling their weight?

The first question is pretty easy, since there aren't that many options. The first thing we decided was that Iona, Shield of Emeria was a bad idea. She encourages non-interactive games, leaves people feeling bad, and just isn't a ton of fun to have at the top of your curve.

The second one that we threw out was Reya Dawnbringer. Even though she has a super powerful effect that this deck certainly wants access to, she's not resilient enough to be an effective commander at six mana.

Of the commanders left, Avacyn, Angel of Hope and Akroma, Angel of Wrath do similar things for the deck. They let you keep hands with nothing but ramp since they give you a threat to ramp into. They apply a ton of pressure and give the deck a significant amount of resiliency if that's what you're looking for.

But since most of your deck is already comprised of curve topping threats, I don't think you need another one as the commander.

That leaves Linvala, Keeper of Silence, which we agreed was the best choice. It applies pressure and interacts early on. It also shuts down some of the more degenerate commanders in the format, and buys you time to ramp up to your bombs. Most importantly, it allows you to run powerful midgame cards like [card Sword of Fire and Ice]Swords[/card] so that your deck isn't nothing but Angels if it does turn out that the list is running too much top end.

The question of what to cut is a little harder to answer, since it depends on the rest of the deck. The following are the angels that I'd look at closely to see if they're doing good work:

Angel of Glory's Rise and Angelic Overseer need humans to be really good, and I don't know if there are many this deck wants to run. All the angels that gain life are similar, so you could cut Lightkeeper of Emeria, Shattered Angel or Battlegrace Angel. Last, I think you could probably cut either Angel of Salvation or Archangel of Strife because they don’t do enough at the top of the curve when you compare them to Avacyn or Akroma.

What’s almost more important than all of the angels you're planning to cast is how you get there. How do you make sure you’re still alive by the time you get enough mana to cast those guys? How do you avoid getting blown out by a removal spell on the first angel you play? These are questions that you have to be prepared to answer, and I thought we could use a great on-theme approach: 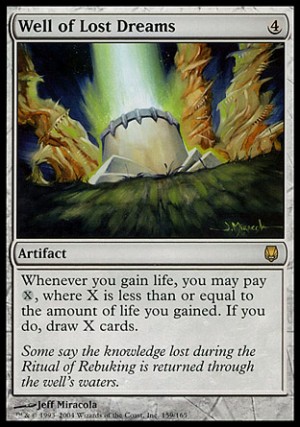 The theme here is that your life total matters. Gaining life is something that white, and angels in particular, is good at. So it stands to reason that you won't have a particularly difficult time keeping your life total high. As long as you don't die to commander damage, you should be able to buy enough time to let your angels take over the board and start turning your life-gain into extra cards with Book of Rass or Well of Lost Dreams.

Because of that, we have a few extra lifegain cards in Angelic Chorus and Sunseed Nurturer. Nurturer in particular is insane because it's both ramp, lifegain, and a human for Angel of Glory's Rise!

Last, we have a few extra cards that give your angels some resiliency to removal. Defy Death is a fine on-theme reanimation spell, although I do prefer Miraculous Recovery for being instant-speed. My favorite of all of them though is Nim Deathmantle, even though it's the card I would cut first for flavor reasons. Zombie angels aren't exactly thematically correct.

Nothing too exciting here. We have a bunch of typical utility cards. Note the inclusion of sweepers that tuck or exile things. Since we’re planning on going really late, we will need to have answers to recurring threats and these wrath variants do the trick.

This is the section of the deck I'd like to expand on the most, but doing so would involve cutting some number of angels to make more space. When I first build a theme deck, I don’t like compromising in that area.

I keep mentioning that one of the most important parts of this deck will be making sure you can cast your angels on or ahead of time. There are quite a few tools to ensure you continuously hit your land drops, and those cards backed by artifact mana should be more than good enough to do the job.

Something that people don't often think about is how you can optimize your ramp based on your curve.

The common sequences of ramp are 2-4-6 and 3-5; it's important to figure out which your deck prefers. 2-4-6 refers to playing a ramp spell on turn two, like Mind Stone or Rampant Growth, and following it up with Solemn Simulacrum or Explosive Vegetation to hit six mana on turn four for any manner of titan or dragon.

The 3-5 scheme is more focused on consistency than explosiveness, and is more focused on cards like Cultivate than on cards like Rampant Growth. Usually these produce more mana over the course of a game, but do it much more slowly than the 2-4-6 set up. This set up is better for control decks that want the game to go long. You'd rather generate cards and land drops than spend cards to pull ahead early on.

Granted, this scheme gets messed up a little if you make space for the Cloudpost and [card Urzas Tower]Urzatron[/card] engines, since those can allow you to make strange jumps like two to seven, but it's still good to have an overall plan.

On the subject of mana bases, let's put one together for this and take a look at the finished product.

Decks like this are a good reminder that you don't need crazy combos or super-efficient, overpowered cards for a deck to succeed. At its heart, Commander is a casual format that's about having fun, whatever that means for you. For some people, it's as simple as casting giant angels or showcasing the sweet cards they've collected over the years. People play the game for all kinds of different reasons, and casual play is a great reminder of that for those of us who are so deeply involved in the culture of the game that we don't remember what it's like to be truly casual.

I haven't quite figured out what I'll have ready for next week, so if you're reading this and you've got any questions or decks you'd like to see, be sure to get in touch. I'm always glad to talk shop!

3 thoughts on “Entreat the Angels”