I don't know how Comicon became the place to release all the news about Magic - GenCon would be the much more appropriate spot - but that's the reality and the Magic announcements just happened. This week, I'll be looking at the unconfirmed rumors about reprints, first-time prints and what we can anticipate from Return To Ravnica.

From The Vault: Realms

Currently, we've confirmed that the following cards are going to be in FTV:R.

With the following new art: 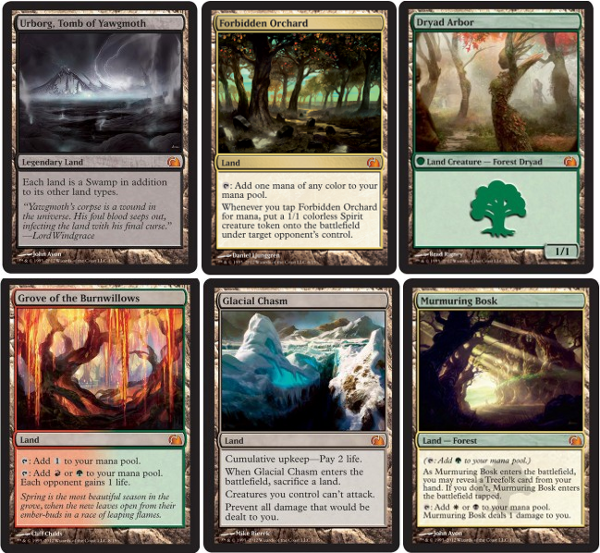 This obviously means that these cards will be worth less when the reprintings come out, and typically it results in about a 25% drop. However, these cards... aren't exactly that sought-after to begin with. While we are still free to speculate about Karakas being included as well, we haven't seen the Thunder Dragon, Mox Diamond or Berserk in this set, which makes me lukewarm on the whole thing. Those cards were all rare, expensive and hugely popular among casual players. Let's put it this way - if these are the lands they are spoiling to build hype, they have not done a great job. You've got, in order, a Lands.dec card, a mostly-dead combo land, a land for a boring tribe, an Oath of Druids engine, an actual 100% great land and then another corner-case land for a few playable decks. These don't scream "casual superstar" with the exception of Urborg. I'm sorry to say this but based on what we've seen now, this looks a lot more like FTV: Legends than FTV: Relics.

What this means financially is that if this set bears out more like Legends than Relics, it's probably not worth buying unless you have deep needs for several cards in it. Without knowing if Karakas is in it, we don't know if it's worth sticker price, but you're going to have FTV foil Glacial Chasms in your binder for years.

First off, this duel deck has a new-art Niv-Mizzet, the Firemind in it. That means that the currently expensive dragon will dip in price. People love the Izzet guild, which did not get a fair shake last time in Ravnica. Sure, pairing aggressive burn spells with draw and counters can be intrinsically dangerous, but Izzet was nerfed enough to just be the joke guild; Goblin Flectomancer didn't help.

Golgari never had many fans because the Dredge mechanic so quickly outstripped the "fair" things that the guild was about. Their spells like Putrefy were great, but nobody really planned on hardcasting Stinkweed Imp... That said, G/B is a huge, huge, huge casual fan favorite. Look at the long-standing love of Rock decks and the current price tag on Pernicious Deed, despite seeing zero play. I foresee a lot of attempts at B/G Midrange when we Return to Ravnica, especially on the back of Thragtusk and Liliana of the Veil.

The Golgari guild deck is captained by Jarad, Golgari Lich Lord. You haven't heard of him because he hasn't been printed yet, but he is costed at BBGG, which is tempting. Ghost Dad, a B/W deck, could make Ghost Council of Orzhova appear with regularity in turn 4 and it had only Godless Shrine and Caves of Koilos to make the mana work. We don't have enemy painlands but we have something better - Woodland Cemetery and friends. If this Legend is worth playing, he'll be castable in Standard.

Financially, you should be picking up all of the enemy "check" lands from Innistrad that you can, if you were not already. Focus on the fan-favorite combos - B/G and B/W are solid bets. Remember that every color has access to checklands, but the friendly checklands have been printed over and over, while enemy lands have only been in Innistrad block - which will be out of print by the time RTR rolls in. Both of these decks have the potential for really nice allied reprints, too.

While MaRo said that we'll see more Commander decks because they were so popular (yay!), we won't have the next set until 2013 because they didn't plan them on their multi-year printing cycle. That means that we'll be getting a product called Commander's Arsenal, which promises new sleeves, oversized cards, dice, foiled regular cards and more. Only that last part - reprints of pre-existing cards in new foil forms - is really interesting to us. For the most part, nobody uses or likes the oversized cards (see: Helvault). Rosewater mentioned cards that had not been premium before, which means that they were not foiled. I interpret this to mean foil in any form, which cuts out things like judge-promo'd Sol Ring. This creates a very narrow band of Commander cards that people want in foil but cannot get already. Most of the pre-Urza sets aren't popular in Commander because they are too weak.

What you should know about Return to Ravnica

The guilds broke up at the end of Ravnica, but they're back now! RTR will consist of the following five guilds in a Big Set: Azorius (UW), Rakdos (RB), Selesnya (GW), Golgari (GB) and Izzet (UR). Golgari and Izzet are the two enemy color guilds in this set, so again - Sulfur Falls and Woodland Cemetery are your friends! Gatecrash is the second set and is also a Big Set, with the remaining five guilds. This has echoes of the previous Ravnica set because they are releasing the enemy guilds later. Enemy color combinations tend to produce some of the strongest cards in Magic - Vindicate, Pernicious Deed, Lightning Helix and more. I don't blame them for staging the stronger ones later so that they can do last-minute tinkering on the set before it goes to print. The final set is going to be a small set with all ten guilds.

None of the keywords are returning.

We've got confirmation that some form of Jace will be in RTR and Gideon in another form will appear in Gatecrash. Of the two, I reckon that Gideon will be stronger, since Jace gets intentionally shafted from now on. I'd also like to see any planeswalker in blue besides him, since I think as a character, Jace is getting a little tiresome. There will be two Planeswalkers in each big set, so there are two mystery mythics off the bat.

Prereleases are going to be guild-centric, with guild-specific packs, prerelease cards and dice. I can't say that I'm excited about much of this, but guild-centric packs are thrilling to me because I wager 99% of them will be opened. Collectors are going to want unopened packs and the unspoken question will be "should I open this Izzet pack and try to win my prerelease or do I hold this booster?" These will be super, hyper rare in sealed form. I expect more discussion on this when we find out more about the packs.

A word on buying sealed product on Ebay

Finally and unrelatedly, I must advise against buying sealed booster packs on Ebay that are not in sealed booster boxes. The reason is that you can "map" packs if you have about two cases of cards. What this means is that a person can set up an elaborate spreadsheet and attempt to pattern the pack-stuffing - it's not truly random. With enough time and cases, you can say things like "this pack will contain Snapcaster Mage" and be correct. When a person can predict where all the money rares are, they can, and do, dump the rest of the packs on unsuspecting people. This can mean that they get dumped on Ebay for incredible prices. Not every seller does this, but the threat is real enough that you should avoid buying packs individually. Look for the Wizards-branded shrink wrap on booster boxes that you'd like.

Leaving that dark note for a moment, let's talk more about RTR! Post your initial insights and reactions to these rumors in the feedback bleow!

4 thoughts on “Insider: Comicon and the Coming Year In Magic”