Today I wanted to follow up on a few items I've discussed over the last couple months, and see if we need to update our opinions. Following up, in general, is one of the most important things in business. It's the #1 thing sales people need to learn to close deals. It's how managers check in on project progress. It's also how you make sure the decisions you made in the past are still sound.

Just like when we play Magic, each turn you need to "follow up" on what your plan was prior. No matter what. Sure, I should have played this 3 drop last turn, but I didn't. Do I just not cast it the next turn either to validate the misplay? No, you update your beliefs, and make the best play now, regardless of what happened previously. The same can be said for speculation and trading.

This one is really a follow-up to a follow-up. I had initially felt Snapcaster would bounce back after the banning scare, and then followed it up by looking at it a bit more in depth. Nothing has really changed since then, so you either liked my reasoning or not, but it hasn't rebounded, and it hasn't fallen much further yet. I'm still in the camp that sees this card hitting $12-15 retail in the next 6 months.

Last week, I noted that Thragtusk was sold out nearly everywhere, and I'd want to be getting rid of these while they are hot. Well, new developments since then, since there will be an Event Deck containing the 5-drop Beast. StarCity's buy price sits at $6, even though they are sold out at $15 retail. This tells me that they are also anticipating the card to drop fairly quickly.

If they are sold out, that means they can move that card pretty quickly if it were in stock. So for them to be buying at only $6 tells me that even in a quick turn around time, they don't want to be stuck with these at the expense of their margins (and who can blame them). I initially thought it would be around $6, but would have to wait for rotation to see its time in the spotlight. Looks like I missed out on this early hype, but the long term price I'm still feeling good about.

I presented the thought of buying into Onslaught Boosters during Cube season, and it faced some amount of skepticism. According to MTGGoldfish.com, prices have fallen on those boosters by about 10% since that article, and the Cube season has ended. Only time will tell if the prices will come back up. It looks like WotC has, at least, attempted to correct the issue that came up with Time Spiral packs in the last cycle, by offering Onslaught drafts for a full week during this "lame duck" no-M13 season, giving people an opportunity to use up these packs.

It certainly appears to have prevented a huge drop in price, and may be just the right move. If this turns out to be how they will repeat this process going forward, then we'll have a better idea of how to predict the price movements. The good news? It's not too late to make a move on these if you think they'll come back up, which I do. The bad news? They didn't fall nearly enough to make a huge windfall when prices do recover. 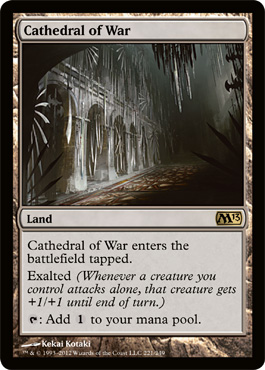 In my Coreset review, I thought this card was a steal at $4, and it's climbed up to $5 since then. I expect it to hit around $6, and will be hanging on to mine until then. While it may or may not see competitive play, casual appeal will keep this card afloat. (Have you seen that art?)

I feel like we nailed this one pretty good. As expected sale price of the completed listings on Ebay has fallen by about $10-15 over the last month, (about 10%) and Bot Prices to buy the cards on MTGO have fallen by about $.20 on average (just over 10%). This could mean that there is still some room to make money here, even though I initially felt it was time sensitive. I will note, however, that there are a handful of listings that went unsold on EBay, so be prepared to sit on the sets if need be.

Trading for (not) Value

Last week I told a story about a recent trading experience, and got some great feedback on alternate ways to deal with such situations. Check out the comments since then, if you haven't already. Also, for completeness, I want to add that I've since talked with the friend mentioned, and it turned out that I was able to sell the cards he traded me for more than what I would have gotten for the Foil Command Tower.

I told him, by the agreement we came to, I'd work something out with him on the next trade. The important part of laying your priorities out on the table when you trade, is following up with your trade partner if things didn't turn out as expected. Especially if you plan to trade with them again in the future, keeping their respect is paramount.

I hope you guys enjoyed the peek back over the last couple months. I'm about to dive into another M13 draft, you should do the same! I love that I'm able to still flip Rancors back to the store towards more drafts before that card falls to the "dime a dozen" category.

4 thoughts on “Insider: Following Up”