After a slightly longer spoiler period due to the combined marketing of the newest Duals of the Planeswalkers, we finally have the complete list for M13. While I am personally less enthusiastic about this core set than I have been with the previous couple, there are still some noteworthy cards worth discussing.

My counterparts here at Quiet Speculation are getting quite skilled at reviewing relevant cards in a new set and identifying their price trajectory. Rather than potentially contradict or, even worse, write redundant information, I choose instead to evaluate the impact the cards are likely to have on others’ prices.

I enjoy this topic a lot more because it is a somewhat unique approach, as many other writers spend countless words on set reviews and value predictions. Let's get to it.

It’s actually instinctual for me to consider impact on other cards before I think about potential value of the spoiled cards themselves. M13 was no exception. My initial reaction to the set’s complete spoiling - no Noble Hierarch!!

This was not a surprise to some, but it was apparently enough of a surprise to the general MTG population. I say this because of the impact rumors have had on the Human Druid’s price (chart from blacklotusproject.com). 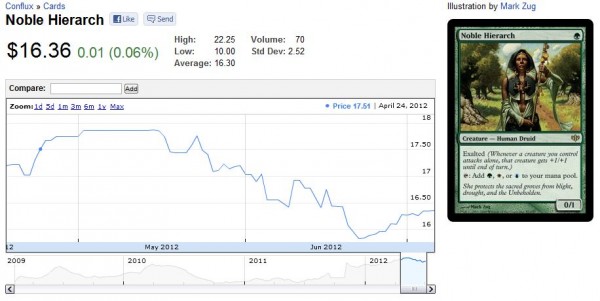 With rumors alone, the card’s value dropped from a peak of $17.75 to a trough of $15.25. This is a drop of about 14%, which to me is an indicator that enough players believed in the reprint rumors enough to fear their validity. You can see the trend turns positive again this past week, and I see the card price increasing again until it hits the $18 level as before. In fact, I’ve already noticed the upward trend on eBay.

Next Reaction – Impact on Standard

My next reaction is to browse the forums discussing some broader metagame impacts of M13. One prevailing theme I have observed is the de-clawing of some of Standard’s dominant cards, particularly with the printing of cards like Ground Seal.

I am not particularly interested in the enchantment’s value trend – I am instead looking to what it means for Standard staple Snapcaster Mage. It seems Wizards of the Coast recognizes the Human Wizard was a tad too powerful, and they have taken measures to weaken the card in Standard.

Price-wise, Snapcaster Mage already began a slight decline recently. The printing of Ground Seal will not help the card’s price one bit (chart courtesy of blacklotusproject.com). This is not a cry to sell all your copies, but it is a suggestion to unload excess copies soon with intent of re-purchasing them at a lower price. 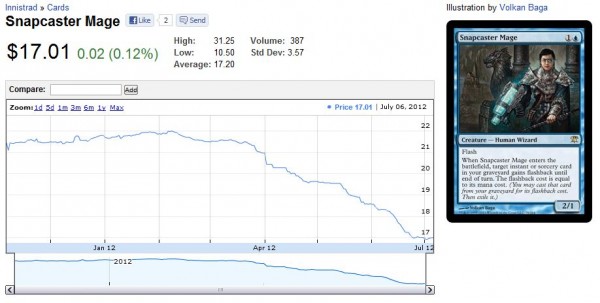 It’s not just Snapcaster Mage that will possibly weaken. The fact that Wizards printed some powerful non-blue cards such as Rancor, Vampire Nighthawk and Thundermaw Hellkite means blue Delver decks may be destined to fall off their mighty pedestal.

Financially speaking, this could spell price drops in other classic Delver cards. Geist of Saint Traft is still a powerful card, but I am not sure how powerful it will be in non-Delver decks. I will maintain a hold recommendation on this one, as its price appears to have stabilized for now (chart courtesy of blacklotusproject.com), unlike Snapcaster Mage. 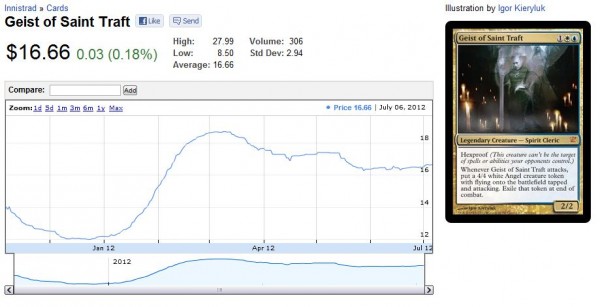 I’ll also mention that U/W lands may be impacted as well as the metagame may shift towards other color combinations. Of course, no one with financial savvy should be holding their Seachrome Coasts this late in the Standard season unless they are winning tournament prizes with them. Even Glacial Fortress will fall slightly out of favor, and of course the M13 reprint increases supply to infinity practically commoditizing the land.

Rest assured not all beloved Standard cards will drop in price due to M13’s printing. As long as the format remains popular, demand will simply shift to other cards driving their prices up.

The printing of powerful white cards Sublime Archangel, Serra Avenger and Oblivion Ring should not be overlooked. Add in Restoration Angel and all our favorite token generators and we have the core of a competitive deck.

Of course I am no Standard expert and I will leave it to the pros to brew up new viable strategies. Instead, I’ll focus on recommending some puzzle pieces I feel will remain relevant with M13’s printing.

My top speculative play these days is Restoration Angel (chart courtesy of blacklotusproject.com). 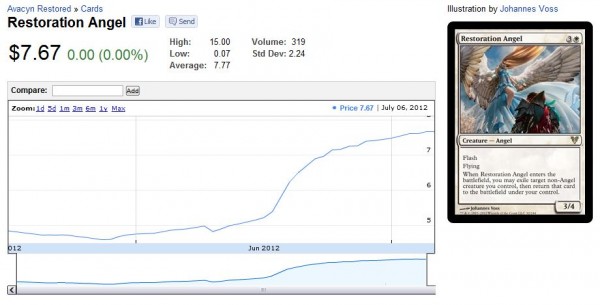 When this card was initially released, I immediately bought two copies for my Angel collection at a price of $4 each. Little did I know this would turn into a financial boon and that I should have bought dozens more. Since release, the card has doubled in price and they are difficult to find for less than $9 on eBay.

Yes, I know this card was a release promo and it has a price cap. At $10 it’s difficult to recommend a strong buy here. What I can guarantee is that this card will remain relevant in Standard and Modern, and that the card should be easy to move in trades even near retail pricing.

I only own one extra playset of the card because I recognize the hard price ceiling, but I certainly don’t mind picking these up in trades from people who still value it at $7.

Another card I have my eye on is Huntmaster of the Fells // Ravager of the Fells. With the aforementioned printing of powerful red and green cards in M13, I don’t see this card becoming less relevant. While its two-colored casting cost is somewhat prohibitive, it should still remain powerful and playable (chart courtesy of blacklotusproject.com). 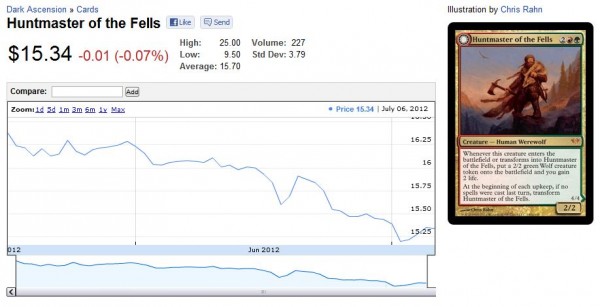 I cannot guarantee the card’s price will shoot up in the near term. But we do know this is a Mythic Rare from Dark Ascension, an underdrafted set. Any consistent demand should keep this card’s price up, and increase in demand should send the price higher.

Looking at other top performers in recent Star City Games tournaments, I see that Birthing Pod decks have recently increased in popularity. Unfortunately, we will see this card’s rotation very soon and this will keep its price down regardless of M13’s card list.

Long term, however, I see the card remaining relevant in Modern. I would recommend sitting on the sideline a little longer and then swooping in and purchasing a couple sets at price bottom, preferably below $2.

Finally, I can’t help but discuss the possibility of a mono-black deck. The newest Liliana Planeswalker, Vampire Nighthawk, Mutilate and Vampire Nocturnus all lend themselves to the possibility. Casual players love mono-black, but the deck always seems to fall short of Tier 1 status.

I would not necessarily buy heavily into any of these cards, but other mono-black cards are worth considering. The problem is, I’m not exactly sure which other black cards would be worthy of the deck. For example, would Demonlord of Ashmouth be any good? Could the six-mana bomb Mikaeus, the Unhallowed finally shine? I wouldn’t go deep into any one card in particular, but grabbing these as throw-ins in trades couldn’t hurt much. Especially Mikaeus, which is especially cheap for being a powerful Mythic Rare from Dark Ascension (chart courtesy of blacklotusproject.com). 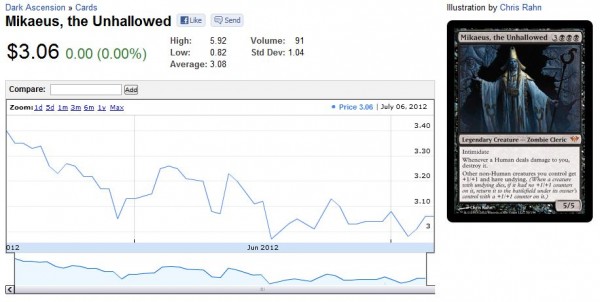 There may only be a couple financially relevant cards in M13 itself. Players will be testing all the Planeswalkers to see if any of them merit their super-inflated preorder prices. Sublime Archangel will likely make its impact and deserve double digit value.

But when considering the set’s financial relevance, we should focus externally. I presented some theories on which cards are likely to drop and which are better suited to hold value or even increase, especially as rotation rapidly approaches. I would encourage you to consider these ideas and even recommend theories of your own.

Generically speaking, powerful Mythic Rares from Dark Ascension are worthwhile considerations because of their smaller quantities. A card like Mikaeus, the Unhallowed is a prime prospect, and with the possibility of a mono-black deck, who knows what the price ceiling may be.

Finally, I want to mention once more that Innistrad Duals are solid pick-ups if priced well. Based on my theories, the window to acquire these cards at the optimal price is rapidly closing. Once Scars block rotates and we are left with M10 Duals and Innistrad Duals (plus, supposedly, Shock Lands in Return to Ravnica) in Standard, I believe Innistrad Duals will slowly disappear from trade binders and increase in price.