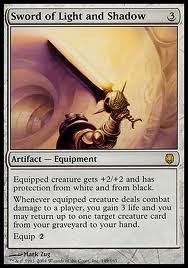 I had a blast at GenCon this past weekend, mainly because I get to spend a lot of time with the larger-than-life personalities of QS , including Editor-in-Chief Tyler Tyssedal, founder Kelly Reid and established writer Corbin Hosler. We played a lot of Danger Room and we were casually trading the whole time. This week, I'm going to share what I picked up on the language of how we trade cards from watching dozens of trades happen. This is fundamental stuff but in a way, it's not a task for freshmen. Like in poker, either your personality sets you to playing the cards or playing the people, and this is for the readers who want to work with people to make trading easier and less tedious.

Observation 1: It's possible to trade without talking about price, even once.

The scene:Kelly and I are playing some Danger Room and Kelly has the front page of a personal binder open, loaded with juicy stuff, sitting on the table. We are in an area where other people are trading but it's clear that we are actually casting magical spells. The presence of the binder makes people still approach and ask if we are interested in trading.

The trades: One person walks by and his friend comes with him. The person browses Kelly's binder and doesn't see anything he's really into, but his friend is practically salivating at the Sword of Light and Shadow on the front page of the binder. "Is that for trade?" he asks. Kelly responds, "of course it is, let me see your binder and I'm sure we can work something out."

Kelly goes back to playing his turn and then flips through the friend's binder. "Here, let's make this really easy. That Sword is yours for this set of Talrands and this Restoration Angel." The guy is in love with this sword and readily parts with two of the hottest cards in Standard.

Why this is so great: at no point did Kelly say "what do you value these at?" or say "well, I put that Sword at thirty." He used the very powerful tool of moving first, making an easy proposition that looks pretty fair. Sure, Kelly could have probably ground out the guy for more cards, but in a minute, he got five really liquid Standard cards for a Commander card that is figurative binder poison, since they rarely actually move.

The takeaway: Can you make a trade without bringing up dollars? If you suggest a trade and it looks fair on the face of it, you can probably just conclude right there. Otherwise, you've set yourself up as someone who can ballpark card prices but does not come off as a grinder. If the person rejects your offer, you can just keep the negotiations going if you feel like you'd still like the cards.

Observation #2: If you ask people to be reasonable, they often end up being generous.

The scene: Again, Kelly and I are playing more Magic. He isn't actively looking for more trading partners, but people keep coming up. One guy needs to fill out his deck and he's asking for a Tragic Slip. Kelly just hands one to the guy - it's a cheap enough card, after all. A minute later, our player comes back and asks him for a Devil's Play and Kelly remarks that there's one in the binder and the guy should find it.

The trade: Our player does, indeed, find his Devil's Play and asks Kelly what he wants for it. Now, this is a card that's above bulk, but only barely. Kelly just responds along the lines of "I don't know, give me something that's not trash and I'll be fine with it." The guy then looks through his stack of cards and peels off a Rootbound Crag for him.

Why this is so great: this is some Tom Sawyer-esque level trading, even if it's for small change. Kelly recognized that there's little use in trying to get 50 cents of value out of the burn spell, so he just flipped it to this guy to make things reasonable, especially in light of just getting hooked up with a common. Kelly makes the guy look through his binder for the card and still gets a rare land that retails for about $2.00 for his time!

The takeaway: One semi-bulk rare for another? One card that's just slightly more liquid for another? These are fine trades as long as you aren't putting much time into it and you can often eke out a little extra value from it. This person gave away what was roughly an equal card to them for something of realistically much less value, and it required very little work as long as Kelly was not particularly interested in the outcome. I have half a mind to believe he would have just told the guy to take the card and leave him alone if there was nothing the guy had to offer!

The scene: I was with another trader from my hometown at this point and two situations came up back to back that solidified this observation. We are chatting and someone fixes their fancy on his foil Dragon Broodmother. My friend proceeds to pull out some cards, then hand the pile over and say "I'll give it to you for this [fairly reasonably balanced] stack."

The trade: The person balked about trading away some of the cards, at which point my friend offered that the person could pull out those cards and he'd find something else of value. The guy backed off on whether he wanted the dragon at all, trying to get him to commit to giving it away for less. My friend handed him his cards, closed up his binder and ended the transaction.

In the other situation, someone who was starting off with the dream of running their own online store approached my friend soon after. The guy had a pretty good collection of cards in his binder but was clear that he had to make value. My friend was having none of this and said that he'd be happy to trade for some older stuff and trade out Standard cards at equal value, trading on the premise of helping this guy get more liquid stock and picking up some cards he knew he could trade. The guy was insistent on getting a "deal" from my friend, who had binders full of great Standard chase cards, and didn't understand that his Antiquities Mishra's Factories would rot in a store that needed to make quick cash flow. My buddy just packed up his cards, said he didn't think they could find a value, and politely ended the transaction.

Why this is so great: I think a lot of traders want to make the deal happen every time. Both of these instances showed that you can be picky about wanting to make the deal. You only have to buy or sell if you are getting terms that are favorable to you. In the meantime, you aren't wasting time arguing over $2 worth of value.

The takeaway: Knowing that you have the power to walk away, that you will see plenty more Sorins and Snapcasters today, should embolden you. The trade does not have to happen and you can be perfectly frank with the person you're trading with. Maybe they don't want the card very much; maybe they have a different trading style or a disagreeable personality that makes you just want to pull out. There's some sense in playing the "let's make this even" game if it's $2 on a $110 trade, but with a $2.75 trade, how invested in it are you? Do you want the hassle? Can you use the walk-away to take advantage of someone else's desire to make the deal happen every time? The fear of losing can be powerful.

What techniques do you use? How has your language evolved away from "got a binder?" and "what do you value this at?" to make you a better trader? Share in the comments below!

6 thoughts on “Insider Basics: Do you talk about prices? Changing our language of trading”