Something interesting is happening on MTGO. For a few weeks now, Avacyn Restored (AVR) Limited events have been far outpacing Innistrad/Dark Ascencion (ISD/DKA) events. Glancing at the list of events from the Limited Queues room, AVR 4 pack sealed is firing at a three-to-one rate over ISD/DKA, and there are eleven AVR drafts to exactly zero ISD/DKA drafts. This was all over a three hour time period on the morning of Sunday August the 19th of 2012. This difference in quantity of events has been ongoing since at least the start of M13 release events.

AVR is a format that players have stated they don't like. But on MTGO, given the option of what format to draft, players see more value in AVR than ISD/DKA Limited. It's not our job to listen to what players say, but to observe what they do. And in this case they are currently voting with their tix for AVR Limited.

It appears that the relative novelty of AVR combined with high singles prices has left it the default format for drafters when they are not interested in playing M13. Bonfire of the Damned is the only card in Standard to command a price higher than 30 tix at the moment. The set also has two of the highest priced rares in Cavern of Souls and Restoration Angel. One might not crack a Bonfire that often, but when a single rare can cover close to half the cost of a draft, that is the kind of expected value which encourages continued play. If this trend keeps up over the medium term, ISD and DKA are going to be in much shorter supply than people anticipate.

We can see in the chart below that the [card Sulfur Falls]ISD dual lands[/card] have started moving up in the first week of August (chart courtesy of mtggolfish.com). Many writers and commentators have been calling these lands good investments for the Fall and this appears to be correct at this time. 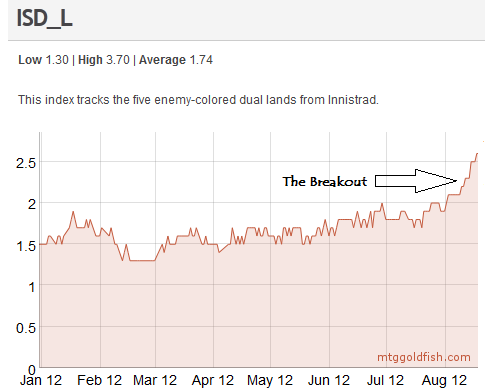 On the chart is highlighted the start of an uptrend after a long sideways trend, labelled 'The Breakout'. This price move coincides with the release of M13 and the slowdown in ISD/DKA Limited. Expect to see the [card Sulfur Falls]Innistrad duals[/card] continue to rise in price until their utility in Fall Standard can be determined. The amount of fresh supply from Limited events coming onto the market is low, which is putting upwards pressure on the price.

Some would argue that the amount of fresh supply is irrelevant to the price. As evidence they would present the large amount of product opened from October to May when ISD and then ISD/DKA were the Limited formats of choice. Although the total amount of cards opened over this time period is probably large, this idea ignores the distinction of how Limited events actually affect market supply.

Cards in the hands of a grinder are sold quickly, keeping a fresh supply of cards coming into the market which keeps prices in the stable to falling range, depending on playability. But many players are more casual, and these types of players will hold onto cards longer. Sometimes they will just not play for weeks or months at a time. This effectively reduces the overall supply of a card. The cards in these players' collections do not actively circulate on the market to the same degree as those of the grinders of MTGO.

Although the total supply of ISD lands on MTGO is quite high, the fresh supply of ISD rares has been severely curtailed recently due to the slowdown in ISD/DKA Limited events. This lack of fresh supply can be observed in the recent price surge in the ISD duals index, and is corroborated by cards like Snapcaster Mage, now at 8+ tix, and the two DKA zombies, Gravecrawler and Geralf's Messenger, both of which have crept over 6 tix.

The MTGO Library bot network is a useful tool in gauging the depth of a market and will be used here to offer some evidence for the dearth of fresh supply from ISD and DKA. Using their price wiki function one can look up a particular card and compare its price across a number of bots. The price at each bot will be listed as well as the number of copies for sale. This gives a rough guide to the state of the market supply. The following is an example of a price wiki search.

Below is a summary of market data collected from the price wiki, as well as prices from cardbotmtgo.com and Star City Games for comparison. The * indicates 'out of stock'. This table gives a rough estimate of the availability and price range for the two highest-priced mythics from each set of the last year. Some comments follow. All prices as of Aug 18th 2012.

Overall, the most readily available cards are from M13. It is not surprising to see the M13 mythics as being the most plentiful due to the set's novelty and popularity. The least available are DKA mythics, which is consistent with the slowdown in ISD/DKA Limited and Dark Ascension being a small set in a large-small-large block structure.

Bonfire of the Damned has the least amount of copies for sale of any of the cards on the table and is also the highest priced. Although Limited play is putting a steady supply of new copies onto the market, it appears that its cardboard price combined with high playability means that demand remains strong relative to supply. This card's price is currently taking a breather online but it might make another push towards 50 tix in the coming weeks, especially if IRL prices continue to rise.

The largest cardboard-digital price discrepancies occur for the two M13 mythics. Once M13 drafting slows down and redemption fires up, prices should normalize between the two. This indicates that Sublime Archangel and the new [card Ajani, Caller of the Pride]Ajani[/card] have room to move up in price online.

The card with the shallowest market supply is Sorin, Lord of Innistrad. It has a relatively low number of copies available online, and is one of two cards on the list out of stock at SCG. Its price range is by far the narrowest with all three prices in close alignment. This card took a brief dip below 14 tix this week before bouncing back to 14.56 on Cardbot, indicating the price floor of 14 tix has held and will not likely be breached in the near term. All told, the low amount of ISD/DKA events firing combined with it being a middle, small set has created a situation where any DKA breakout in Fall Standard will cause a rapid and large price increase.

Comparing prices and availability from multiple sources is a great way to get a feel for the market. Combined with the observation of other trends, such as the type and amount of Limited events firing, it can provide a solid basis for projections about future price movements.

As an exercise, see if you can suggest the future price movements on Geist of Saint Traft and Huntmaster of the Fells // Ravager of the Fells based on the evidence presented here and their probable place in Fall Standard. Post your analysis in the comments or the forums under Ask the Author.