As you may have noticed, I did not write an article last week. The reason I was unable to do so is because I was on vacation in the great country of Ireland. I went there to explore and learn a little bit more about my heritage. While I was there, I was surrounded by nature and it got me thinking about the color green in Magic. I have also been out of the competitive loop of the game for those two weeks so it seemed like the perfect time to write about a "less serious" topic.

The goal today is to discuss the cards that most embody the color green, at least as I see it. I wanted to limit the card pool a little bit so I am sticking to Standard cards.

For maximum enjoyment, read this article with an Irish accent.

Despite the fact that any color deck can play this card due to the Phyrexian Mana in the cost and activation, this is actually a very green card. Birthing Pod is a tutor specifically for creatures. Other green cards do this as well, such as Worldly Tutor, Primal Command, Green Suns Zenith and the new Mwonvuli Beast Tracker. Every color gets some tutoring effects but green always searches for creatures.

The fact that this is a repeatable tutor effect obviously makes this artifact amazing. Birthing Pod reminds me of the build-around-me enchantments that the color used to get like Aluren, Earthcraft, and Survival of the Fittest. Birthing Pod is going to be one of those cards that players are using for years to come.

At this point, most of us think of Acidic Slime as a core set staple because it has been available for the last three years. This M10 card affects the board in a very green way. Naturalize is an effect that green used to share with white. Now, white only gets to destroy enchantments and red gets the artifact destruction side. Green still gets both though.

When Acidic Slime was printed I was surprised that it was able to destroy a land. It had been a little while since green had a Creeping Mold effect. I think we take this creature for granted sometimes and forget just how good it really is. In addition to removing hard to deal with permanents, the card also gives you a 2/2 bear that trades with most other ground creatures.

When I was working on Wolf Run Black a couple months ago, Acidic Slime was one of the key cards I missed the first time I built the deck. When I remembered the innocent-looking card, it fleshed out the deck and helped me in many matchups. As long as it is in Standard, look for Acidic Slime to have an impact.

Green is known for its ability to fix your mana. There are always a variety of ways to do this in Standard. We still have both Rampant Growth and Farseek as well as Borderland Ranger. The reason I chose Abundant Growth is because the way green used to fix mana was often through enchantments. It has been a while since cards like Wild Growth and Fertile Ground were legal in Standard.

Although this new enchantment does not accelerate your mana, it does replace itself and grant you access to whatever color you are in need of. When Return to Ravnica comes out don’t forget about Abundant Growth in your deck building. Allowing your land to tap for any color of mana is a powerful effect that may open up possibilities with the new multicolored set.

I know this card is not going to blow you away with its power level, but the effect it provides is a very green one. The ability to "regrow" cards back from your graveyard is only given to green.

Regrowth is powerful enough that it is still restricted in Vintage. Revive only allows you to get back green cards and that takes the card from all star to nearly unplayable. I would not be surprised if we saw this effect being printed in Ravnica as a multicolored card. Revive will allow you to get back a lot of cards coming out in the new block so although it most likely won’t see play, it is worth remembering.

Do you think reprinting Regrowth would be too powerful for Standard? Let me know your thoughts to that question below in the comments.

A top ten list idealizing green would not be complete with out a sweet pump spell. Giant Growth was in the core set for years and there have been many different versions of that effect. Green also gets pump effects that leave the counters on the creature. Decree of Savagery comes to mind. In fact, the increasing cycle including Increasing Savagery seems like a shout out to the decree cards from Onslaught Block. Even though it is rarely used, being able to flash this spell back will definitely win you a few games.

Every color gets some type of card drawing and green is no exception. If you are playing a lot of creatures like green tends to, this sorcery has the ability to draw you a lot of cards. Even with a high percentage of creatures in your deck you can still hit one or zero creatures in some games which is why this has not seen more play.

When it was first printed I tried it out many times. Later once Innistrad Block was out, I worked with it again in Birthing Pod decks and I always thought it belonged in that deck.

For me, Rancor is a classic green card. In the past green has been an aggressive color. Wizards has moved away from that identity until this year when they printed Strangleroot Geist and now Rancor. These two cards make an aggressive green deck a possibility once more. Rancor embodies the resiliency that is often associated with the color green as well.

Speaking of resiliency, Thrun brings further meaning to that word. Many players have forgotten just how good Thrun is because he has been overshadowed by the power level of the clones, Phantasmal Image and Phyrexian Metamorph. Thrun is good enough that even at four mana he has seen some Legacy play. One characteristic of green creatures is being hard to kill, and with not only hexproof but also regeneration, Thrun fits the bill. His only drawback is his vulnerability to clone effects.

This five cost creature is in my opinion one of the best ever printed. How is an aggressive deck supposed to beat this insane card? Five additional life is a lot, considering the power and toughness you get on the creature. Again with green's creatures being resilient, Thragtusk always leaves behind a 3/3. It doesn't matter how they remove it the first time, you always get your 3/3 to replace it. I know this guy is not seeing much play right now but unless combo becomes a major part of the new Standard format, Thragtusk will definitely have a big impact on the format.

The number one spot goes to . . . Dungrove Elder, of course. It doesn't get much more green than power and toughness equal to your forested lands. Historically green does get a lot of creatures with stars for power and toughness and this is one of the best examples of the effect.

Well there you have it. The top ten cards that epitomize the color green. Honorable mentions go to Cudgel Troll, Garruks Companion, Llanowar Elves, Predator Ooze, Stingerfling Spider and Jade Mage. All of those cards were ones that I gave serious consideration to during the process of writing this article. If I missed a card that you think idealizes green, post it below in the comments.

Finally, I will leave you with my favorite picture from my Ireland trip. Next week I'll be back, hopefully covering some sweet spoilers from Ravnica. 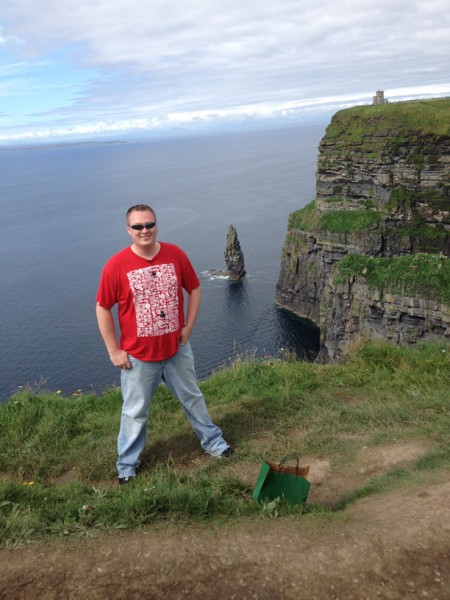 Don't forget, Magic is supposed to be fun.