Return to Ravnica spoilers have continued to arrive, and this set is gathering a good amount of hype. Perhaps more than any previous set in recent history. This is the first time I can remember seeing booster box preorders averaging over $100 at auction and retailing for $120, other than maybe Zendikar after the treasures program was announced.

Shocklands are certainly a factor in this, and there are some pretty powerful spells in the set which also drive up demand. Finally, casual players will likely want to draft this set for years to come.

With this incredibly popular, highly anticipated set, what are the solid buys? Are there some cards that may gain in value thanks to RtR? Should you buy a booster box now or wait until release? Are there any cards worth preordering? I’ll try to touch on all these topics in this week’s article.

Not half the set has been spoiled, yet Return to Ravnica already contains many financially relevant cards. But which ones are worth acquiring? And at what price?

To begin, let me start with a general statement – I never preorder cards. Well I suppose that’s not completely true. I preordered cards once – a set of Linvala, Keeper of Silence, which were both necessary for my Angel collection and which appeared powerful for competitive play. (Funny how all but one were traded away long before their spike thanks to Modern, chart from blacklotusproject.com). 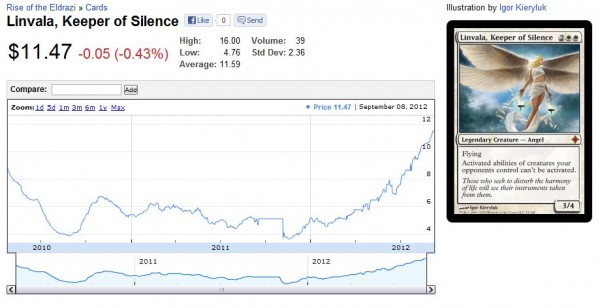 Normally there are only one or two cards from a new set which quickly rise in value after release. In Avacyn Restored, the cards were Bonfire of the Damned and Restoration Angel. Wolfir Silverheart also jumped initially but has since pulled back.

Being able to identify the gems is not easy. Since there is normally a window to acquire cards after they are “noticed” but before they jump in value, this is typically the time I decide to buy to avoid risk. I’ve already made some profits flipping a few Bonfires and I have about ten Restoration Angels I acquired in the $4-$7 range.

With that disclaimer aside, I move my attentions towards the noteworthy spoiled cards. 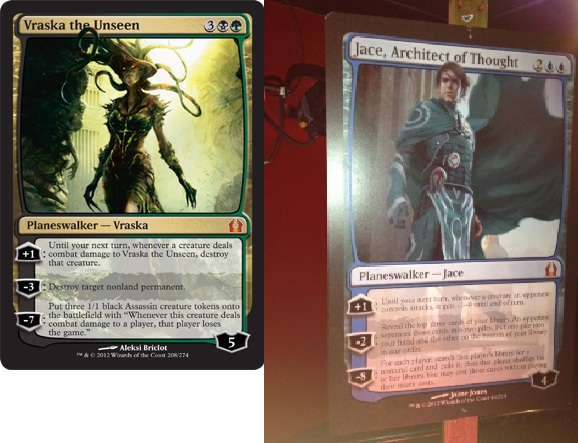 It certainly seems like Wizards is forever paranoid to create another overpowered Jace, and so they deliberately make him virtually unplayable in constructed play. There are some who believe his +1 combined with his starting four loyalty will keep him alive long enough to be relevant. I’m not so convinced, and personally I am much more excited about the newest Planeswalker, Vraska.

She pretty much guarantees you will be trading relevant cards with your opponent when she hits the battlefield. Just to attack her means certain death for your opponents 6-power creature or array of smaller dudes. Her -3 ability is certainly powerful and should help her stay on board. And while her ultimate doesn’t mean game over like Jace, the Mind Sculptor, it certainly shifts the dynamic of the game tremendously.

On the downside, she is B/G. However, with a multitude of mana-fixers in Standard, this should be barely prohibitive. I expect Vasra to see ample play in Standard.

But what about pricing? Jace can be pre-ordered for $20-$25 while Vraska averages in the $30-$40 range. I see neither holding their initial price-tags. Planeswalkers nearly always pre-sell at inflated prices due to hype and anticipation. Players don’t want to miss out on the next Big Jace ,but I assure you, these two likely aren’t it.

Still, once prices settle down (maybe 30-40% drop) I may give Vraska a try – she seems pretty sweet.

There have already been four distinct cards with a clause that they cannot be countered.

These four multi-colored cards represent quite the array of powerful rares. Notice how the is one uncounterable spell per guild? I wonder if the fifth and final guild, Izzet, will have such a spell as well…

.@cntrstrk14 Yes, the "cannot be countered" cards are a rare multicolored cycle.

Value-wise I am most excited about Abrupt Decay which is sure to be powerful in Eternal formats. A two-mana instant that is uncounterable and can destroy the vast majority of relevant non-land permanents is a force to acknowledge. It’s also pre-selling higher than the other cards, so again I wouldn’t go and order a dozen of these just yet.

But Eternal relevant cards are always noteworthy, and if Abrupt Decay sees Standard play as well, it could quickly become a $15 rare. For now I’m in a holding pattern – current prices don’t enable much profit and are likely inflated.

The others are interesting and none of them should be bulk. The Smiter is incredibly powerful for a 3-drop, but it becomes somewhat irrelevant in the late game as a nearly Vanilla 4/4 creature. Supreme Verdict is an uncounterable Day of Judgment… so what? Like most rare mass-removal spells, this one will probably end up in the $5 range. Slaughter Games is very similar to Thought Hemorrhage, which received a lot of hype at release but ended up being a dud (chart from blacklotusproject.com). 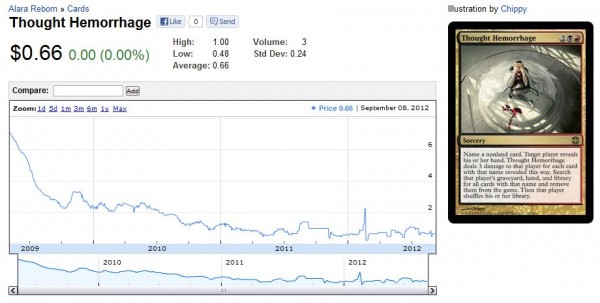 In terms of value, once Return to Ravnica launches, I predict these uncounterable cards will order themselves (highest to lowest) as: Abrupt Decay, Loxodon Smither, Supreme Verdict, and Slaughter Games. They are currently pre-selling on SCG for $15, $5, $6, and $1 respectively. While they may drop from there a bit, these prices may not be as inflated as the Planeswalker prices.

Everyone wants to know where these will end up price-wise. Although a reprint, these will be in massive demand for both Standard and Modern, and this should keep prices up. If I had to make a guess, I’d say the less popular Shocklands will settle in the $6-8 range while the more in-demand lands (blue ones) will still remain double-digits, but lower than where they have been since Modern’s announcement.

My rational is based on comparison with Zendikar Fetch Lands. While not reprinted, Zendikar was opened and drafted a ton, driving the supply incredibly high. Still, their utility in two formats – Legacy and Modern – have kept their prices near the $8-$10 mark on non-blue copies and $12-$15 mark on Scalding Tarn and Misty Rainforest.

So I feel these will be the price ceiling on Shocklands, but their floors will be kept in check because of their Standard playability in the near-term.

As I mentioned at the beginning of this article, Booster Boxes are now preselling reliably in triple digits, going as high as $120 + shipping on major retail sites. What will become of Return to Ravnica booster box prices?

First I should begin with another disclaimer: when I talk about buying a booster box of RtR, it is with the intent of keeping it sealed. I am not an advocate of opening boxes. Some people have managed to profit from opening their pre-ordered boxes immediately and selling singles while prices are high. While a viable strategy, I simply do not have the time and energy to do this.

I’m in it for the long haul. This set will remain in high demand for years to come, both because of casual player demand as well as demand for the Eternal staples (Shocklands, Abrupt Decay, etc.). Therefore, like other successful sets, booster boxes from this set will go higher in the long term. But as for the here and now, I honestly think it’s best to wait.

Once the set is released and people have Return to Ravnica cards in their hand, the hype will settle down and boxes will return to normal prices. Supply will shoot up on sites like eBay, driving the prices down to the typical $90 range. This is where I intend to buy. I just can’t see prices of boxes of an in-print set – even Return to Ravnica – go even higher until after it rotates out of Standard

Quick Ideas For Other Pickups

While Return to Ravnica promises us some very financially relevant cards for years to come, I struggle recommending a buy on any cards at this stage. Pre-ordering is always a game of chance, and I personally don’t like the unfavorable odds. In a couple months, when the hype calms down, I will return to this set to highlight some winners to pick up. This is my risk averse strategy.

But this doesn’t mean I’m not buying. In fact, I have been making purchases left and right across eBay, Card Shark, Amazon and MOTL in anticipation of the launch of Return to Ravnica and the impending influx of Magic players resulting.

In rapid-fire fashion, I’ll close with some of my latest pick-ups along with a brief explanation for why I’m targeting them. 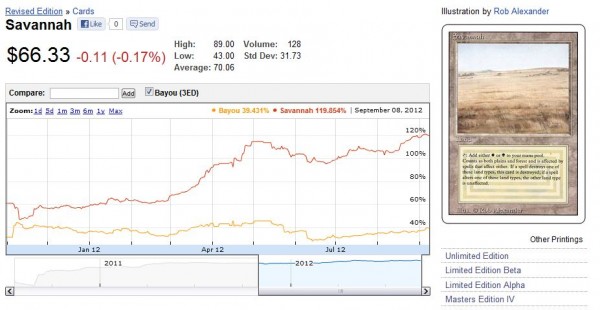