Online prereleases for Return To Ravnica (RtR) are expected to be firing by Friday the 12th of October. As soon as they begin, cards from Scars block and M12 will rotate out of Standard. Rotation has a large effect on the price of cards because Standard is the most popular constructed format. Come the middle of October, cards like the Scars duals, Green Sun's Zenith and Sword of War and Peace will have less utility and a price drop can be expected.

Many players have already anticipated this loss of playability. Sword of War and Peace has been on a rapid decline since the end of June. For speculators though, the absolute best time to buy up cards is approaching. Cards that were Standard staples from Scars block and M12 will soon be on sale as players sell their copies for whatever they can get. Eternal formats have been picking up lately online, but most players still play Standard or draft. And in order to draft, players need packs and tix, and when cards can't be played in Standard anymore, they quickly get sold into the market.

Last year it was no secret that QS writers and forum dwellers were excited about the opportunity that came with Zendikar block rotating. The fetch lands were going to be on sale and these lands are all-format staples. It was a can't-miss opportunity. Marsh Flats, Verdant Catacombs and Arid Mesa all touched or dropped below 3 tix last year. 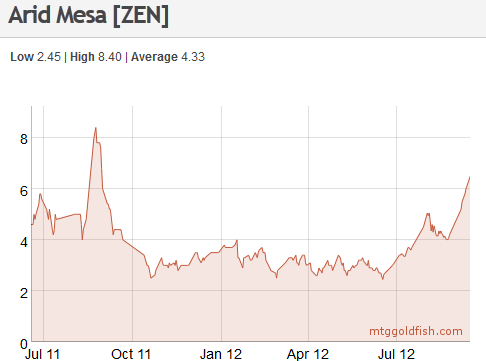 The bottom for these was the first week after Innistrad release events started. Although these three fetch lands are definitely lower tier, the recent interest in Legacy and Classic has driven up prices on all fetch lands. It took close to twelve months, but buying in last year on these lands would have yielded a nice profit at this point.

Misty Rainforest and Scalding Tarn were much more profitable due to their utility in Modern. Last year's PTQ season drove up prices enough that these cards nearly doubled in price by January of 2012. Playability in Modern matters. This is key when deciding which Scars block cards to invest in. If they are fringe or unplayable in Eternal formats, then stay away. Staples are what we are after. There might not be cheap fetch lands to gorge on this year, but there are a few good opportunities waiting.

Mox Opal: A staple mythic, this is used particularly well in Affinity, making it the fastest in Modern constructed. The price of this card has been increasing lately, probably due to the recent interest in other Eternal formats, but regardless it should be looked at as a very solid investment. If the price weakens in October, be ready to buy.

Wurmcoil Engine: This card sees play across all formats. In particular it is used in the Modern R/G Urzatron deck which uses colorless mana to power out enormous colorless threats. I was concerned about the Urza's lands getting the axe in the banned/restricted announcement this week, but they dodged that bullet, so full steam ahead on this card.

Fastlands: These have been quickly coming down in price along with most of the cards that are rotating out of Standard. They have their place in Modern, particularly Seachrome Coast and Blackcleave Cliffs. Modern is tempo oriented so having dual lands that come into play with no drawback in the early game is important. These fit the bill and they are all going to be down in the 0.5 to 1 tix range. Backing up the truck and loading up on these is a good long term bet, with some potential for profit in the upcoming Modern season. 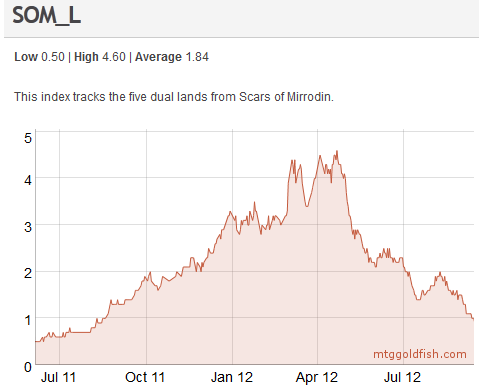 Inkmoth Nexus: Real estate is a great investment in Magic, and this particular piece will be used in Modern Affinity and by casual players everywhere seeking to apply 10 poison counters to their opponent. The bottom on this one will be tougher to judge than the fastlands, but see what it reaches in the 3rd and 4th week of October. This is another card that will be a good bet in the long term, with some potential for short term gains.

Elesh Norn, Grand Cenobite: The most played praetor is also the most expensive. This card will have applications in any type of reanimator strategy and will hold long term appeal to casual players. This card compares favorably to the Eldrazi monsters such as [card Kozilek, Butcher of Truth]Kozilek[/card]. 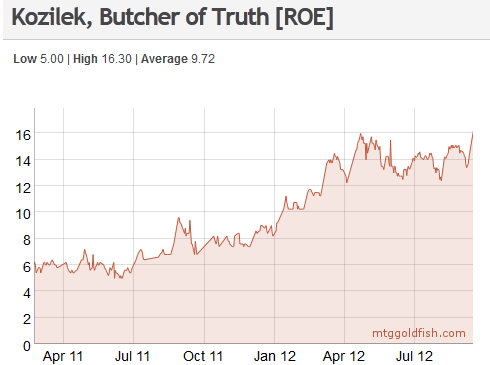 Kozilek and many of the other Rise of the Eldrazi (RoE) mythics have seen steady increases in their prices since they rotated out of Standard. New Phryexia compares well to RoE as both are 3rd sets and both have a number of powerful cards and large monsters such as the praetors and the chancellors.

Karn Liberated: A 4-of in R/G Urzatron in Modern. This is a good short term bet. Buy these during the RtR release events, anticipating to sell them by December when the Modern season starts. Online PTQs drive short term prices quite a bit, and this is a card that could see large price spikes due to it being a 3rd set mythic and a 4-of. This is another card that would be correct to back the truck up on.

In this article, I discussed the motivation for buying junk and low-priced mythics as a means to profit on demand from redeemers. In the following week's article, I suggested the New Phryexia praetors as good speculative investments. The best one so far appears to be Vorinclex, Voice of Hunger which has recently started increasing in price. 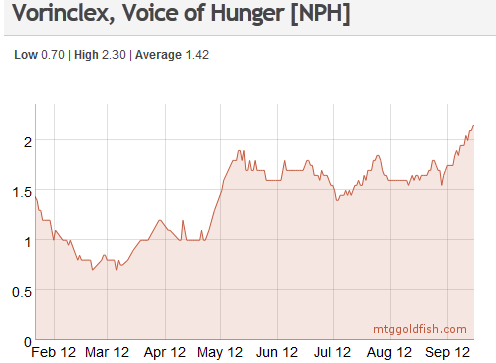 For mythics that aren't regularly played in Standard, price bottoms have no strong reason to coincide with the release of the Fall expansion. For this reason it is important to pay attention to prices in and around rotation, not just after RtR is released. All four of the cheaper praetors are still good investments, with [card Sheoldred, Whispering One]Sheoldred[/card] and [card Urabrask, the Hidden]Urabrask[/card] still near their bottom.

Although Karn Liberated is the most played of the planeswalkers from Scars block, all of the others have some appeal and are just about bargain priced at the moment. Looking at Nissa Revane's chart since that card rotated out of Standard gives us some guide as to where the price of [card Koth of the Hammer]Koth[/card], Elspeth Tirel, [card Venser, the Sojourner]Venser[/card], and [card Tezzeret, Agent of Bolas]Tezzeret[/card] might be headed over the next year. 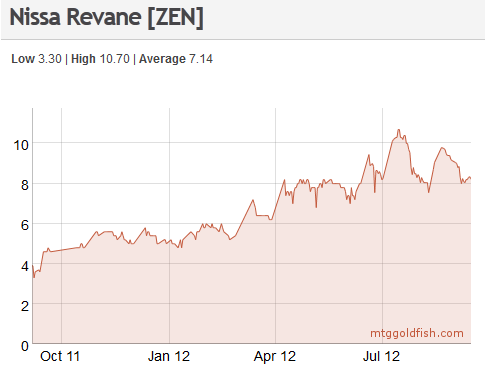 Pauper is a format that has seen consistent play on MTGO for years. Even pros pick it up now and then as it is an Eternal format that feels closest to basic Magic. Getting a two for one is about as good as it gets in Pauper and it feels great doing so! Poison strategies are feared in Pauper so there are a few potential pick ups from Scars block.

Mutagenic Growth and Glistener Elf are both staples of Pauper Poison. Scouring the classifieds for cheap copies of these cards might be time consuming for most, but it can be a fun way to dip your toes into speculating. The big caveat is that seeing large gains on these is unlikely and they should be treated as very long term holds, 2+ years at minimum.

Gitaxian Probe is a little different. It appears in Pauper Storm decks, but also has cross format appeal. Again, buying commons on MTGO is not the quickest way to earn a profit, but packing away a few of these for the distant future is sure to yield a pleasant surprise down the line.

Get interested in buying rotating cards during October. While players are cracking packs and enjoying the new cards from Return to Ravnica, this is when speculators should be paying attention to what is old and out of favor. Once Modern season rolls around, many of these cards will be back in demand. Also, redeemers will be looking to finish off their sets. Buying these cards in and around rotation ensures you are not overpaying for them and their are plenty of reasons to expect profits down the road.