Return to Ravnica spoilers are everywhere now, and I want to get this out of the way up front. I think Zombies are insane.

It looks 100% to be the best deck going forward, and that has many implications. To give you an idea of the deck’s power level, here’s a scenario. I’m testing against Jund-colored Zombies (and probably not even the strongest build) with a deck designed to crush Zombies. To give you an idea, I’m running the “Living End” deck of Innistrad block, where you cast a bunch of value Humans to survive the early turns and eventually get an Angel of Glorys Rise into play.

That means I’m playing cards to survive, like [card Huntmaster of the Fells]Huntmaster[/card], Fiend Hunter, Doomed Traveler; even stuff like Cathedral Sanctifier because it’s all about getting to an Angel. I’m running 4 Faithless Looting, 4 Angels and 4 Unburial Rites to make it happen before Turn 7. To add on this, I thought playing three copies of Riders of Gavony would be good in the upcoming meta and solidify the Zombies matchup.

On paper, I should pretty much never lose to Zombies. So what happened? I lost, 4-3, in the seven games we played. That’s including sideboarded games where I’m bringing in EVEN MORE hate. Cards like Elite Inquisitor! That’s how powerful the Zombies deck is.

But it’s not what we’re here to talk about today.

Real Estate is up all over the place these days, and I want to talk about the two relevant cycles we care about – Innistrad lands and Shocklands. Let’s start with the former. 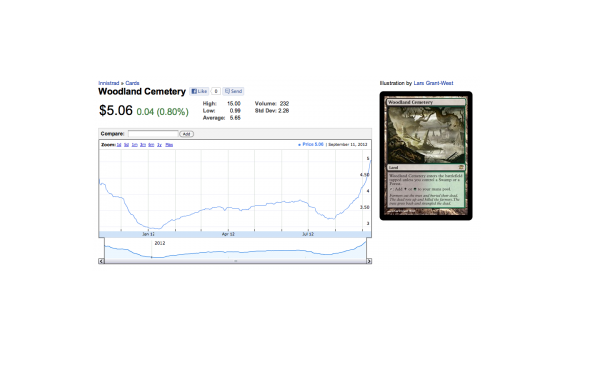 Uh, remember what I said about how good Zombies, and specifically the Plant variety, are? BLP is a bit of a lagging indicator, and in reality the Cemetery is up to $11 on TCGPlayer.

What does this mean going forward? I think you can probably pick up Cemeteries for the next week or two at decent prices before everyone catches on to the spike, but I really can’t see it holding more than $12-14 long-term; there were just too many opened. That said, Zombies are a real thing, and stocking up on both the good Zombie cards (and lands) is a good move; if you want to go deeper you can look for the cards that hurt Zombies.

So we know about the Cemetery. What about the other ones?

Hopefully you’ve been taking the advice we’ve been giving for months and months on this site and stocked up on all the Innistrad lands, but if not there are still some opportunities.

Isolated Chapel is right behind Cemetery in terms of price, holding steady at $10, where it’s been for awhile. Interestingly, Sulfur Falls is the only one of the Return to Ravnica-colored Guilds that is low. While Izzet as a Guild doesn’t look overwhelming, the color combination will likely stick around in Control decks as the format matures, and that makes it more attractive.

Now, we get to the ones I’m more excited about. Specifically, Clifftop Retreat and Hinterland Harbor. Prices on both of these have come up as well, but they are going to be more undervalued on the trade floor than the other ones.

Why is this? On the simplest level, it’s because the Guilds for those two colors aren’t out yet. I expect Boros to be incredibly popular when it comes out, so Clifftop Retreat is my No. 1 target as far as Innistrad lands go. I’m excited for Simic, but I don’t think it will be as popular as Boros, which already has so many pieces in the Human cards from Innistrad. A U/G combination, on the other hand, isn’t as readily apparent. It’s still a good move to pick these up.

While people are going nuts over Woodland Cemeteries, I’m going to be stocking up on the other Innistrad lands and wait for their day in the sun.

Medium-term I see all the lands holding value upwards of $7, with spikes up to $13-14 for the most popular ones. It’s not quite as high as the Scars Fastlands reached, but the addition of Shocklands makes these Duals better, not worse.

Here’s the big question on everyone’s minds. Shocklands are already priced highly, and they’re going to be needed in such a variety of formats, how are they not a great pickup at $10?

Here’s the thing. If SCG is pre-selling the most highly-anticipated cycle in the Block at $10 (where 3/5 are), you shouldn’t be buying. Yes, the Shocks are great. Yes, they’re played everywhere.

But this isn’t the first time the above statements were true. Let’s look at the last time this happened. 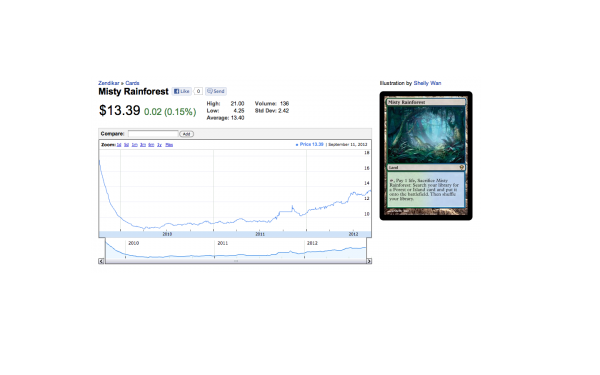 Super high starting prices, and then a solid baseline of $8-10 for many months after that, until the creation of Modern spiked the price again. Arguably, fetches are in even more demand than Shocklands, since you don’t always run 4x of a particular Shock in Modern and you don’t even use them in Legacy. So if Blue fetches can’t break $10 during their Standard run, can Shocks?

The answer is no. Given the discrepancy between Ebay (BLP prices) and retail, I think this would seem to suggest Shocks would be in the $10-15 range retail.

All Is Not As It Seems

But that’s not all there is to the story. Not even close.

Let’s start with the more obvious difference. Shocklands are reprints. While there aren’t exactly infinite copies of the originals running around, there are enough to make a difference. With this in mind we would lower our original prediction by probably 25-30%. That means we’d be looking at a retail price of $7-11.

But again, there’s more we need to look at, in particular with our comparisons to fetchlands.

By my math, that’s three months where we are opening one less individual Shockland pack than Fetchland pack. It’s not enough of a reduction in demand to offset the realities of reprinting, but it will help prices hold some.

It is by considering all of this information that I’ve come to my own personal conclusion on the price of Shocks – that they’ll have a baseline of $7-8, with the most popular ones spiking to $12-13.

I understand this isn’t exactly a groundbreaking prediction, but I think an analysis of all the factors we have to consider is something worth detailing. Knowledge is power, and it’s by using metrics like this that I come up with my predictions, rather than simply “going with my gut.” Lots of times, those who are making predictions are mentally accounting for these factors in their heads, even if they can’t articulate them, so I hope my spelling it out was helpful.

Also, if you have a chance I think you should trade New Shocks for Old Shocks straight-up. It remains to be seen if the new art is enough of an improvement (if at all) to push the price of New Shocks past old ones, but I doubt it does. However, I do think you’re going to find people who are willing to trade straight across, and this nets you a few dollars every time you do it, based on current prices.

I hope you’re all as excited about the set as I am!

7 thoughts on “Insider: What, oh What, To Do With Our Lands?”