Sometimes in deck building, all you have to go on is one card. Take Armada Wurm for example. 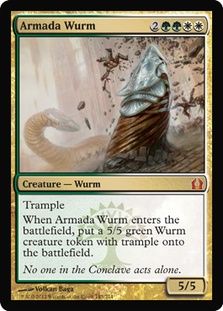 The first time I saw this thing I knew it was extremely powerful. The obvious comparison is to Broodmate Dragon but this time the creatures have trample instead of flying. Six mana for ten power is an excellent rate. If they printed a six mana 10/10 with trample, we would all go nuts over the power level. Armada Wurm is actually better as two creatures rather than one because it’s harder to deal with. What I know is that Armada Wurm is very good and I want to find a home for it. It is too good not to see play in Standard.

One of the first ideas I had with Armada Wurm was to include it as the top end of a midrange token deck. The new populate mechanic seems solid and populating wurm tokens seems unbeatable. Take a look at Junk Tokens.

This is my first look at a token deck. I like the mana curve because it allows us to play early token makers and follow that up with some way to populate them or pump them up. Of course, we also have Armada Wurm at the top of the curve to seal up some games. Six mana is not a lot in a deck like this. Early in the last Standard season, I played a similar style deck and the six-cost creatures were really what made the deck good. That is definitely the case here.

You can easily take the offensive or defensive role depending on your opponent. Gavony Township is extremely important and very synergistic in the deck. But if there are too many mana problems with three copies, it might be prudent to remove one copy.

At the moment, the only need for black mana is the flashback on Lingering Souls. I could see adding in a removal spell or two but you do not want to dilute the deck too much. If you take out too many cards dealing with tokens, you will lose the consistency that makes this list so solid.

One card I would look to include in the deck or sideboard is Oblivion Ring. That enchantment is a catch-all removal spell and should help get you out of most sticky situations. The first black card to add would be Sorin, Lord of Innistrad. Although he was not playable pre-rotation, I think he becomes much better in the new environment.

One card I am uncertain of is [card Trostani, Selesnyas Voice]Trostani[/card]. If I were going to make any cuts, I would analyze how well that card is playing out. I like what she does, especially that she populates the rest of your creatures, but four mana seems like a lot for this effect. Those two spells could turn into any of the suggestions above.

Overall, this is a solid tokens deck. It has everything you could want to make this archetype viable like utility lands, good token makers, resiliency and a good finisher. It's hard to say if a deck like this will be one of the pillars of the format until we see some actual tournament results but it is certainly an option.

A dedicated token deck is not the only place that Armada Wurm can fit though. We can use a lot of the same cards and create a midrange aggressive deck.

4 Rancor
4 Call of the Conclave
3 Oblivion Ring
2 Ajani, Caller of the Pride

G/W Midrange seems like a solid deck to me because of the high power and toughness to mana cost ratio. Loxodon Smiter, for example, will shut down most aggressive strategies until they find a removal spell. Most of the time they will have to get you to block and then after combat use Pillar of Flame or Tragic Slip to finish him off. Whenever this happens he is a two-for-one.

Strangleroot Geist also does a great job holding the ground against aggro. Higher up in the curve are the high-impact spells like Thragtusk and Armada Wurm. Most decks cannot handle either of these threats which makes them great creatures for the top end of your curve. Oblivion Ring helps you deal with difficult permanents like Lotleth Troll and planeswalkers. Originally, I had Selesnya Charm in the spot where Ajani is, but I think the three-mana planeswalker will be key to winning some matches.

This deck is capable of some very fast starts as well. Casting a turn two Loxodon Smiter and following it up on turn three with a Rancor and a Strangleroot Geist does eight damage on turn three. I think even most of the aggro decks will have a hard time keeping up with that ideal draw.

Another idea is to add some red mana to the midrange strategy. Obviously, adding another color opens up more possibilities. We need to be careful when adding a third color not to take too much damage from our lands or the deck will struggle against aggro.

This idea came to me from trying to build a deck similar to the Jund decks that used to dominate Standard. Since Armada Wurm is the new Broodmate Dragon, it seemed logical to create the deck in Naya colors. Take a look at Naya Midrange.

4 Rancor
3 Pillar of Flame
4 Call of the Conclave
3 Oblivion Ring
2 Ajani, Caller of the Pride

The goal of this deck is to play the best creatures at each mana cost and some removal to back it up. This deck has two different two-mana 3/3's, a 4/4 for three mana, and an amazing four-drop with four power. The power level of all the cards in this deck is extremely high. You have Rancor and [card Ajani, Caller of the Pride]Ajani[/card] for evasion and [card Pillar of Flame]Pillar[/card] and [card Oblivion Ring]O-ring[/card] for removal. Every way you look at it, this deck is solid. The mana base might need a little work because all of the cards demand a lot to work. Of all the decks I am writing about today, this is the one I am the most excited to try out.

Finally, Armada Wurm seems to fit the best in a control deck as the finisher. So, the final deck I want to take a look at is Junk Control.

This deck may look familiar to you, as a lot of authors have been talking about decks like this one. The major difference is that they are Jund decks rather than Junk decks. I chose to go with white mana over red in this deck because of how good I think Armada Wurm is, and because you don't lose much by removing the red.

The Loxodon Smiter may look strange in this deck, but remember it clogs up the ground quite well which is helpful against aggro. Also, since it is uncounterable, it will help a lot against control decks. Personally, I love Underworld Connections and I might even try to fit a third copy in the deck somewhere.

Of the four decks, I think this deck is the one that could change the most. Control decks must rapidly adapt to the changing metagame. The removal is so versatile in black and white that there should not be many threats this deck cannot handle, but you will definitely want to customize your removal depending on the direction the format heads in.

Hopefully you can see just how many options there will be for new decks once this new format is a reality. Building decks with one card in mind, I was able to brainstorm four completely different decks. There are so many possibilities for this new format, I can't wait to see the first few events to see what ends up on top.

Unleash the Force, but don’t forget to watch out for Syncopate along the way.