The stock market is an exciting place where money is made and lost every day as prices zig and zag. The bond market on the other hand is filled with relatively boring and predictable investments. Bonds are an asset class that you want in your portfolio to diversify your holdings in order to protect against large downward movements in the stock market.

With MTGO speculating, in-print booster packs are analogous to high quality bonds. These digital packs are in steady demand, they are highly liquid and their prices are stable compared to digital singles.

It's important to note that out-of-print packs do not have the same liquidity or utility on MTGO as in-print packs. Out-of-print packs are much less fungible due to not having any use unless a draft queue opens up for them.

Discounted Packs in the Secondary Market

Among the in-print sets, as of August 29, 2012, you can buy packs of Dark Ascension (DKA) on the Classifieds for 2.40 tix. If you bought tix instead of packs at the store and used those tix to buy DKA packs from bots, this is a discount of 1.59 tix per pack. This difference in price between the store and the market should get your attention. Why are packs of DKA so much cheaper on the secondary market?

This discrepancy has occurred because of the large overhang of supply left over from DKA release events, the first period of cube draft, and constructed prizes. Each of these factors injected more packs into the market than were being consumed in draft and sealed events. Supply of DKA packs relative to players’ current needs is high, which results in a depressed price as players sell packs into the market for tix.

Currently, the only format to award DKA packs as prizes is Block Constructed. From August 17th through August 29th, a total of 49 Block Constructed Daily Events fired. That quantity of dailies keeps up a steady flow of new packs into the market. Combined with the current popularity of M13 Limited, there is very little demand for DKA packs at the moment. The chart below shows a steady decline since June, from just under 3 tix all the way down to sub 2.5 tix. 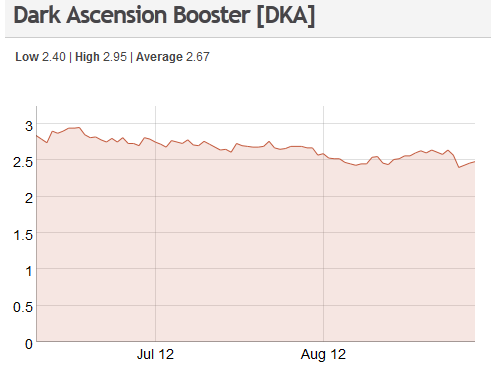 The trend is currently still downward, so prices might scrape even lower. However, Block Constructed will shift from Innistrad to Return to Ravnica (RtR) once the latter is released in October. At that point, the excess supply from constructed prizes that has been steadily eroding the price of DKA packs will be severed.

If Innistrad/Dark Ascension Limited events continue to fire, rational players will buy tix and then purchase DKA packs on the classifieds in order to take advantage of the large secondary market discount. Over time, the overhang of supply will reduce and market prices will align with store prices. This process of price alignment will occur with any set that floods the market but continues to be consumed through limited play.

The question for speculators, then, is if there will be enough interest in ISD/DKA Limited to absorb the extra supply of booster packs on the market. When choosing what limited format to play online, most players consider two things, cost and novelty. If a format is dull and uninteresting, drafters will avoid that set in favor of a different limited format or they will even dabble in constructed. Cost of online limited play must also take into account the expected value of what is opened. Casual players will quickly drop a format if there is no chance of recouping a draft or two by opening pricey mythics or rares.

Seeking expected value in drafting is most prominent among grinders but is endemic to the MTGO player base. Playing cheaply is good, playing for free is better. If a limited format is cheap to enter and the packs hold chase rares and constructed staples, players will be drawn in for drafts and sealed deck in the hopes of "going infinite" or simply chaining a few events in a row for free.

As for chase cards, typically the most expensive MTGO cards in a Standard environment come from the previous year's third set. In the case of a block that has the large-small-large format, the third set effect is somewhat shared between the middle and last set. The previous block with such a structure was Zendikar block where Worldwake (WWK) and Rise of the Eldrazi (RoE) had the priciest cards of the year in Jace, the Mind Sculptor, Vengevine and Gideon Jura.

Worldwake as a Blueprint

The price history of WWK packs should be a useful guide for this speculative position. WWK packs were widely available for around 3 tix during Rise of Eldrazi (RoE) release events, and eventually they shot up to around 4 tix. WWK had the chase mythic, a cycle of manlands as well as other valuable cards which would have encouraged drafters to stick with ZZW over RRR. In terms of block structure, being analogous to WWK is encouraging for the prospect of investing in DKA booster packs.

In terms of constructed playables though, DKA does not measure up to WWK. However, it does feature two powerful mythics in Huntmaster of the Fells and Sorin, Lord of Innistrad, as well as three tribal favorites (and Standard playables): Falkenrath Aristocrat, Gravecrawler and Geralf's Messenger.

Currently ISD/DKA limited events are the third choice of limited players. M13 Limited is the current most popular format in the Limited Queues room, followed by AVR. At this point, there is no reason to believe that ISD/DKA Limited will move up in popularity in any meaningful way in the short term. And that means that RtR Limited will soon take the spotlight, further pushing thoughts of older limited formats out of drafters' heads.

This situation should naturally correct itself over time. If cards from Innistrad and Dark Ascension are heavily played in Fall Standard and beyond, then there will be a steady demand for these cards. If limited play is not putting enough copies onto the market, prices will rise. This trend of ISD/DKA being the least popular limited format from the last year will reverse as players naturally seek out higher expected value from the packs that they open. Eventually, prices on DKA packs will rise as packs get consumed in limited play.

Implementing this trade requires some patience and some work. The bots on the classifieds that sell packs have the appearance of many different dealers, but in fact most of them are controlled by one individual. Fortunately the margins this near monopolist demands on packs are thin, so we are not faced with monopoly prices despite the market being controlled by one individual. The drawback is that this dealer is unwilling to sell great quantities, so you are restricted to buying 3 packs per day.

The buy/sell spread on DKA is currently 2.30/2.40. If DKA prices rise to 3/3.15, this is a net profit of .60 tix per pack, a return of 25%. Importantly, this dealer does not share credits among all the bots. Some bots are connected in small chains so make sure you use the same bot or bot chain when making purchases so as to not lose track of a few tix held in credit between many different bots.

A few other market players can round out your purchases though if you are impatient. The Supernova Bot chain regularly stocks boosters and The Card Nexus also has booster bots. These two dealers are independent from the big pack dealer, but their prices match the market, usually with a small discount. However, they are smaller players and will sometimes run out of packs to sell. Also, Supernova will adjust prices on any purchases over one booster, so trying to load up on packs from Supernova will not work as the prices will rise the more you try to buy.

There are a few risks with this trade. The overhang of supply might never get reduced. This occurred with ROE packs which never got above 3.3 tix after M11's release. If DKA only reached this price it would still be greater than a 25% return. A larger risk is that anyone who attempts this trade runs out of patience and either sells the packs back into the market, eating the spread, or straight up spends them to enter a limited event.

Once RtR hits in October, the bottom for DKA packs should be reached, so buying in over the following 6 to 8 weeks should be the best time for this position. At the outset of this trade, Spring of 2013 is the target selling period, so if you cannot stand to have packs sitting in your collection for 8+ months, then find a different trade. If you are willing to hold onto DKA packs for the medium to long term, then this highly liquid asset should produce a positive return of 25%+ with little downside risk.

11 thoughts on “Insider: The Bonds of MTGO — Investing in Packs”