I have every intent of writing an article to discuss one of the safest MTG investments in the game: basic lands.

Always in demand and always legal in every format, basic lands provide a steadfast foundation to a long-term portfolio. Even within such a narrow area, there is an array of possible investments ranging from the obvious (such as Unhinged foil basics) to the more obscure (such as Wald). 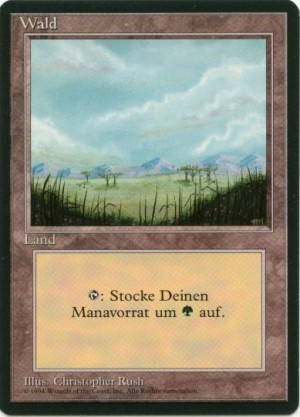 It’s difficult to draft up this article with all the action that has taken place this past weekend. We had a Modern Pro Tour with some interesting breakouts, another SCG Open with some surprisingly absent cards from the Top 8, and we had one of the most significant new set announcements made in Magic ever.

And then this was spoiled: 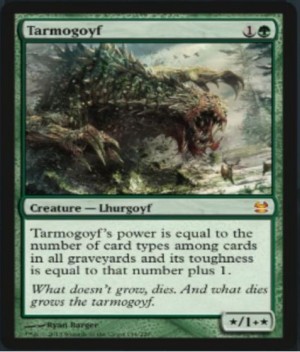 And that’s when I knew I simply could not ignore all the latest financially relevant news to satisfy my own flair for creativity. My article will have to wait yet again – at least it’s one of those articles that will remain relevant for a long time.

Pro Tour events have the tendency to move the market more than weekly Star City Games Opens. The masses recognize that if the Pros are willing to play given cards, then those cards are certainly worthy for their own decks. Thus when hundreds of Pro Players congregate in one place to play a major event, people take notice. And thanks to live broadcasting, everyone can be up to date on the latest deck tech from the comfort of their living room.

To begin, let’s take a look at the Top 8 breakdown. It’s interesting to notice that only one deck appears in multiples:

While the variety is surprising, the absence of some archetypes is equally noteworthy. I don’t see any Pyromancer Ascension decks. Strategies involving Birthing Pod or Kiki-Jiki, Mirror Breaker are also missing. And what happened to that “breakout” deck that could win on Turn 3?

Well, the Twitter buzz on this deck, which relied upon Nivmagus Elemental, rapidly went from this: 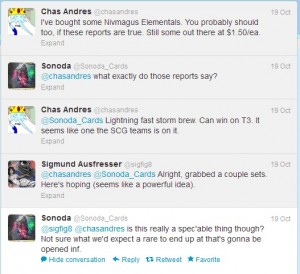 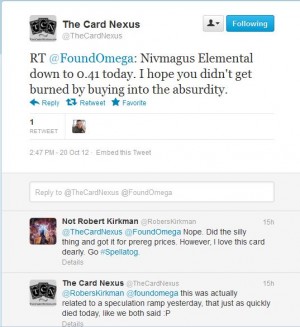 Unlike the Blazing Shoal deck from a couple Modern tournaments ago, the Nivmagus Elemental deck could not handle the most ubiquitous deck of the format: Jund. Hence we see three Jund decks in the Top 8 and zero Nivmagus decks.

Needless to say, the Modern format is still maturing much like the new Standard. Going deep into strategies that rely on such a glass cannon is quite risky and most combo decks are likely to be hit or miss as the format evolves.

Looking at the other Pro Tour top performers, it seems clear that we should be focusing on steadfast strategies such as Jund, Robots, and UW builds for pickups. Or should we?

Time to Buy, Right? Maybe Not…

The other major news of the weekend came from Aaron Forsythe himself, live from the Pro Tour in Seattle. There he revealed to the world the first all-reprint set in quite some time: Modern Masters.

This limited print run set will contain all reprints from 8th Edition to Alara block and will focus on increasing availability of Modern cards. MSRP is $6.99 and with the given print run I’m willing to wager that packs will actually sell at an even higher price. All of this is being done to carefully control the amount of reprints made and protect the financial integrity of the secondary market.

Without such caution, we’d have another Chronicles on our hand. For those who may not remember, Chronicles was Wizards of the Coast’s attempt to increase the availability of many desirable cards from early Magic expansions. This included Arabian Nights, Legends, Antiquities and The Dark. The financial impact of this set was devastating since it was printed by the boatload. Even now, 17 years later, there is very little in Chronicles of financial relevance. Star City Games currently buys eight cards of the 125-card set above bulk pricing, making it one of the least valuable sets ever printed. 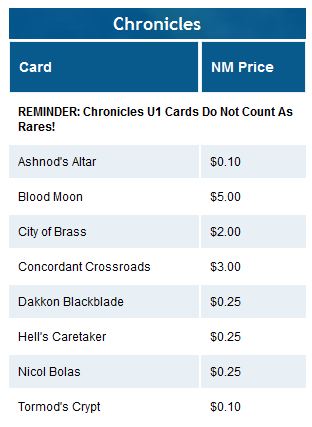 I do not expect Wizards to make this same mistake again. They learned a great deal from the Chronicles backlash, and the limited print run and higher MSRP is implemented to address the risk of an all-reprint set.

With this announcement, all the Jund speculation targets have suddenly become speculative at best. Tarmogoyf is already confirmed and I wouldn’t be surprised to see Dark Confidant make an appearance as well.

Nothing from 8th edition to Alara Reborn is immune to reprints. Therefore even though the release of Modern Masters isn’t until summer 2013, speculating on these cards for profit may not be the best strategy moving forward. You’ve got a full PTQ season to sell your extras for profit and make some quick flips. After that, expect values to drop simply due to panic selling.

There are some cards that may still be worth looking at from more recent sets. Fetch Lands will not be in Modern Masters since they were printed in Zendikar. And with Jund being a mainstay, Verdant Catacombs seems like a solid investment. Inkmoth Nexus and Mox Opal are two cards significantly off their financial peak that won’t see a reprint in Modern Masters. These should also be safe.

I also want to touch on the Top 8 results at the SCG Open. It seems Jund has a significant place in Standard as well, with three Jund decks making Top 8 and two making Top 4. The other two decks in the Top 4: Frites. Rounding out the Top 8 we have two U/W/R Midrange decks and one G/W Aggro deck.

Notice what’s suspiciously absent? Miracles! What happened to this beloved strategy? Has the metagame evolved? I am glad to have unloaded my 20+ copies of Terminus. And while its price has been on the rise, I think Entreat the Angels has just about hit its peak – I would recommend selling your extras. Hopefully I don’t even have to waste more than once sentence telling you to sell Bonfire of the Damned (chart from blacklotusproject.com). 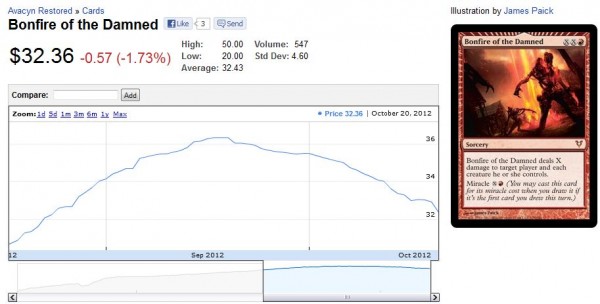 On the other hand, it looks like Huntmaster of the Fells // Ravager of the Fells is here to stay. I’m surprised this guy hasn’t gone up in price yet. All three Jund decks that made Top 8 ran the full set maindeck. How Thragtusk, a core set rare reprinted in an Event Deck, is $20 while Huntmaster, a Mythic Rare from an under-drafted set, is $18 is beyond me.

If Jund remains dominant in Standard, I think Huntmaster of the Fells // Ravager of the Fells has to go up in price at least a few bucks. I wouldn’t buy 100 copies but I would trade for these and pick up a few extras at auction.

There are actually a few other noteworthy cards from this Jund deck. Dreadbore is sold out on Star City Games at $7.99. Sever the Bloodline has finally seen some price movement and is sold out at $1.99. There are still ample copies below $1 on Card Shark and eBay auctions are ending in the $1 range, despite the cheapest Buy It Now listing has them at $2 each (chart from blacklotusproject.com). 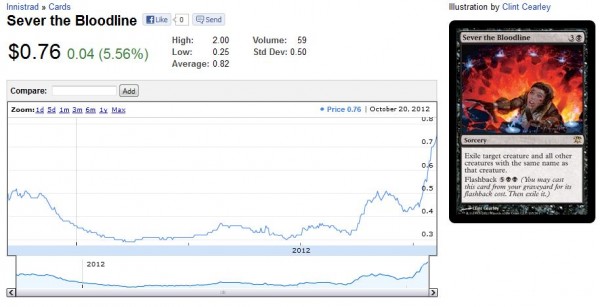 Finally, Angel of Serenity has once again proven its strength. The card is a major component of the new Frites desk, and Star City Games has been selling through copies handily at $24.99. She’ll hit $29.99 before she hits $19.99.

What may also be relevant is a card that can combat Angel of Serenity: Evil Twin. This dark Clone made itself known in one of the Star City Games feature matches. He may not spike a ton, but if people won’t give you Sever the Bloodline as a throw-in anymore, I would target Evil Twin instead.

All This News Is Good News

Magic is more popular now than ever before, and it’s great to see Wizards of the Coast keep up with the hype. By generating this buzz with great Pro Tour coverage, exciting new product announcements, and terrific new Standard sets, they are “striking while the iron is hot”. The result: this game will continue to grow in popularity.

Financially, this will ultimately be a good thing. Some cards may drop in price with reprints and metagame changes, but the overall trend will increase as demand increases. If you have a diverse portfolio, your collection will inevitably rise in value as demand for cards increases. Should new players get into older formats, older cards will especially go up in price. Modern is just a stepping stone to Legacy, after all.

Net, this is a great time to hold Magic Cards and speculate on them. I’m excited for the ride and I hope you are as well!

11 thoughts on “Insider: All the Buzz from this Weekend – Pro Tour, Modern Masters and More”