The world of Standard is constantly evolving. Just like any new format, players are working on new strategies all the time. The difference between this Standard and previous formats is the depth provided by the new set. Return to Ravnica has many more playable cards for constructed formats than we are used to seeing, which means more decks are possible.

Today I want to look at some cards I think have been misevaluated in Standard. Some cards players think too highly of and others are hidden gems that not many people are playing yet. Let’s get started. 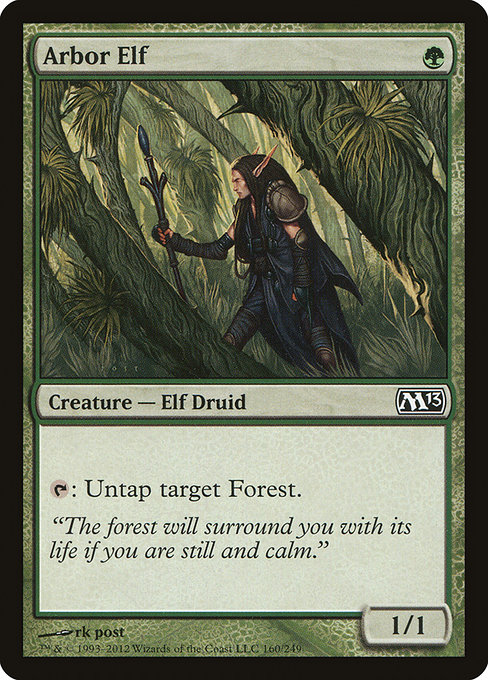 Games in Standard do not end quickly. Certainly Zombies of any kind can win reasonably fast, but we are talking turn four with the best possible hand and turn five or six is more reasonable. Do we really need to waste time and cards casting a one-mana accelerant that will most likely get killed the following turn?

If the only reason you're playing these cards is to jump to three mana, I think that is the wrong line of thinking. A deck like Frites may need these cards to function quickly enough to win games, but other decks should probably not play them. If every game is going long enough for you to hit six mana, wouldn’t you rather have a more impactful spell? 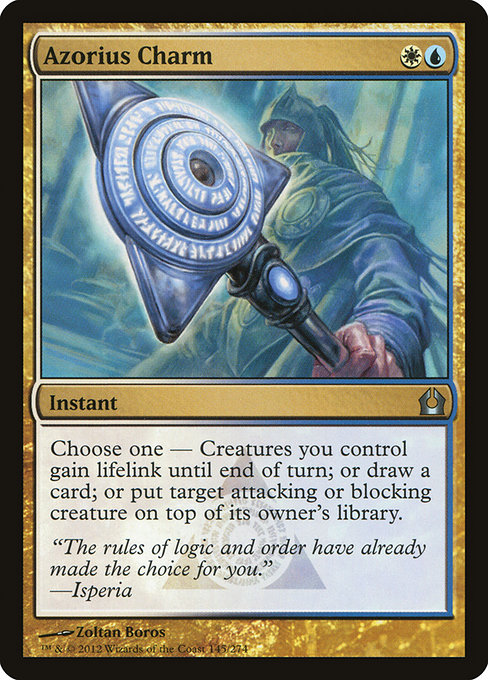 This may be a shock to you, but I don’t actually like this charm right now. What is it good against? It is definitely good against Zombies, but from the testing I have done, that’s about it. Do you really want to put creatures with haste or enters the battlefield abilities back on top of the deck? This doesn't slow the game down much at all. The cycling ability is OK and the lifelink ability is good occasionally but four of this card seems a stretch and it might be right to cut it entirely. On the surface it seems amazing, but when the games actually play out you end up using the draw a card option more than you’d like. 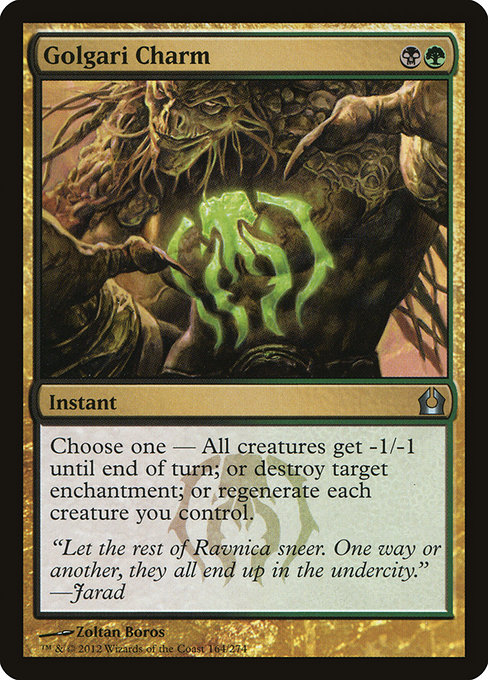 The fact that players are including this in the main baffles me. Let’s break down the three abilities.

-1/-1 to all creatures is a good ability in a format with a lot of one-toughness creatures, which is not the case for our current Standard. This ability should be at its best against Zombies but it doesn't even kill many of their creatures. As for destroying enchantments, there are a decent number of Detention Spheres running around and occasionally you might want to kill one, but I don’t think that's a maindeck ability. The third ability, regenerate each creature you control, is great if half of the decks you were playing against were casting Supreme Verdict. Obviously this is not the case.

So is this card playable? Yes, but it really shouldn't be in the maindeck. I would side this in against any control deck with both blue and white but that’s about it. 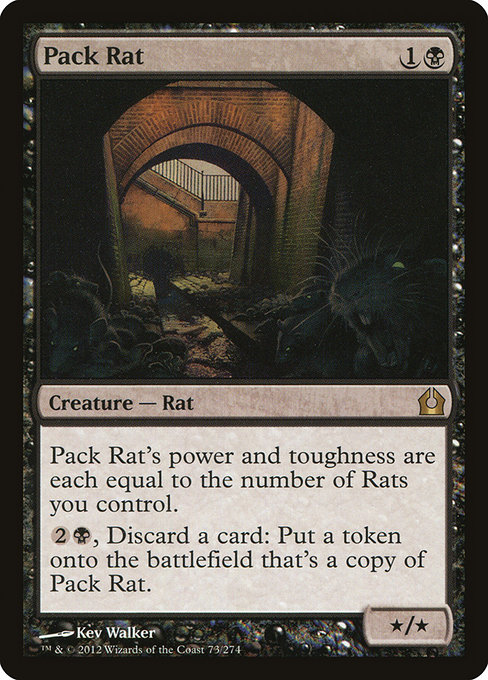 It's hard to remember the last time a rat saw play in Standard. The times I can think of were original Ravnica Standard when we had Ravenous Rats and Hellhole Rats. OK, so maybe it was just me playing Hellhole Rats, but they were amazing! Before that, there were some in Kamigawa Block, but it was a major creature type in the block so some were bound to be playable.

Basically, Pack Rat is part of a tribe most players dismiss as unplayable, but it merits a closer look. The first indication is that many players at the Grand Prix last weekend were naming Pack Rat as the best card in Return to Ravnica Limited. When a card dominates Limited, often that carries over to Constructed.

Several aspects of this card make it better than it looks. First is its mana cost, the gold standard for playable creatures in Standard. The fact that it's a 1/1 is a little unappealing, but it shouldn’t stay that way for long. Also, making a token doesn't require tapping the rat, which means you can use the ability multiple times per turn. Some players did not realize this and that caused undervaluation. Another part that is misread is the fact that you can discard any card. People tend to think that you need to discard a creature, similar to Lotleth Troll, but that is not the case.

Finally, Pack Rat makes copies of itself, not some other kind of tokens. That means if your opponent kills one of the rats, you still have the card in play even if it is a token copy. These abilities together make for a resilient creature. 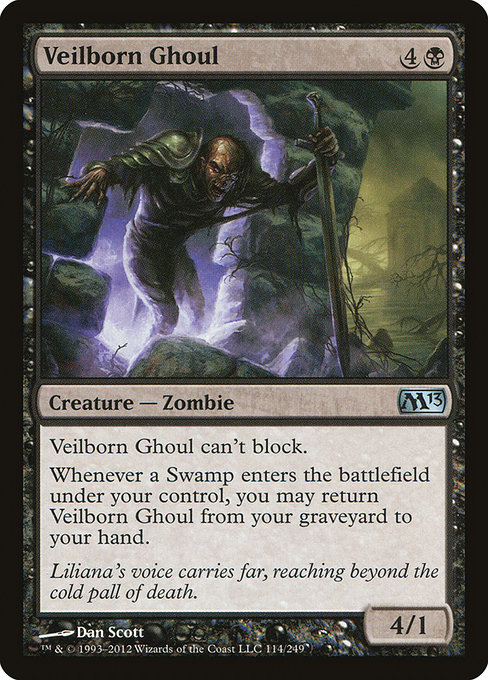 When I am evaluating a card for constructed play, a five mana creature with less power than its mana cost and a drawback like can’t block gets dismissed fairly quickly. The only exception is if the creature has a relevant ability as well. No worries with Veilborn Ghoul though, he doesn’t have a good ability to go with those stats. Or does he? When you play a swamp, return him from your graveyard to your hand. I guess that’s OK if the format is slow as molasses. What if we think outside the box? Is there another way we can abuse this ability?

Maybe a repeatable discard outlet like Pack Rat. We could also discard to Lotleth Troll which is a powerful interaction. If you play Lotleth Troll on turn two, discard Veilborn Ghoul, play your land on turn three and discard again, your troll is already a 4/3! 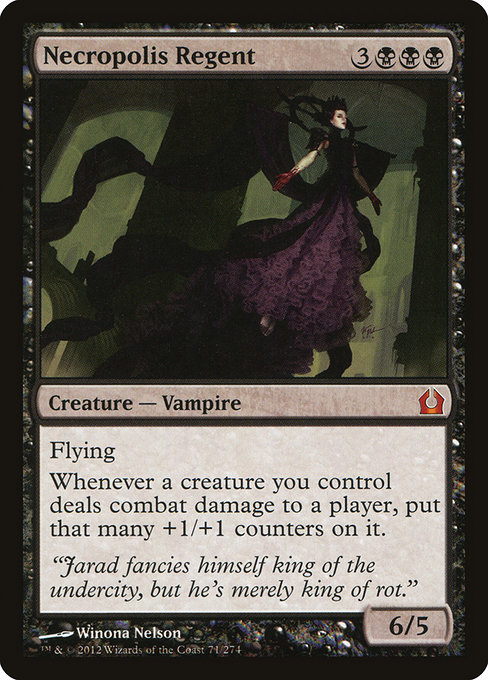 Let’s get something out of the way. This is not a bulk mythic. With no titans in Standard, we need to change how we evaluate expensive creatures. Think about how this card plays out for a second. The game is progressing evenly and on turn six you play this giant flying vampire. (You opponent stops to read the card because they have never seen it before.) They think nothing of it and are not worried.

The next turn you attack for six damage in the air and put six +1/+1 counters on your vampire. Next turn you're swinging for twelve in the air. If your opponent took damage from their lands or you dealt them any damage before you played her, they are dead. Once you realize this vampire is a two turn clock, she seems much better.

That's to say nothing of the situation where you already have creatures in play when you cast her. Then we are talking about doubling the size of your army! I think Necropolis Regent could be the finisher for a control deck or the top end of a midrange aggro deck. She will close the game out so quickly, your opponent won’t know what hit them.

How can we use these underrated cards?

This version of Zombies increases the resiliency of the deck a lot by adding Pack Rat and Veilborn Ghoul. I think ideally the Pack Rat is better on turn five when you can discard immediately, but he is still fine on turn two. Putting Rancor on Veilborn Ghoul if the game goes long seems strong as well. Zombies is a solid aggro deck but this version is just more resilient than some of the other ones I have seen doing well.

This was the first deck I worked on with Necropolis Regent. You may notice the remarkable similarity to the winning deck from Star City Providence, but that is just a coincidence. One of the main differences is my lack of one drops because of the reasons I stated above.

I am still tweaking numbers with this deck but the idea is solid. The goal is to make a continuous stream of creatures with your planeswalkers, trade them off netting virtual card advantage, and then finish your opponent with Necropolis Regent or some Gavony Township activations.

Make sure if you cut the one-mana accelerators as I suggest that you compensate by including more two-drops. For example, I am playing both Farseek and Call of the Conclave as well as a couple Selesnya Charms. These will not only give you plays early in the game but also help you build a stronger board presence.

That’s all for this week. I’m sure there are many more underrated cards that we have yet to discover so keep looking and keep brewing.

Unleash the Under Dog Force!

14 thoughts on “Standard: Underrated and Overrated”