This year I have the pleasure (random chance) of being the last Insider article published on Quiet Speculation of 2012. Sitting in front of my computer, I thought about all the clever New Years’ themed articles I could write about. Resolutions, changes, saying bye to the old and hello to the new, etc. But you know what? Those are a little overdone.

What’s more, I have two important topics I want to discuss this week. The first is somewhat time-sensitive, so I do not want to wait even a week to bring it up. The second is not time sensitive in the realm of Magic, but the topic came to me while reading a book. I want to make sure I share my observations while the book is still fresh in my mind.

For some reason I had my mind fixated upon the New Year as the commencement of Modern season. I figured I had this whole past week to get some last minute Modern specs such as Inkmoth Nexus and Mox Opal. I was wrong.

Granted, these two specific cards are still fairly available – Robots is not as prevalent a deck as Jund. But the “Modern spike”, as I’ll call it, has already happened, concurrently with the true beginning of Modern season, which took place over a week ago. Many Jund staples have already jumped significantly in price – so rapidly that I cannot even use Black Lotus Project to illustrate the movement. That site just hasn’t caught up enough.

But I have two very personal data points I can share based on a difficult decision I made. Following the rationale that Modern Masters will bring reprints, Wizards of the Coast wants to keep Modern affordable, and this is the last Modern season before Modern Masters, I decided to sell three of my personal playsets. Two listings have already sold: 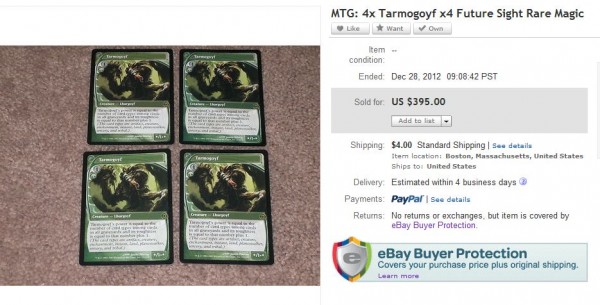 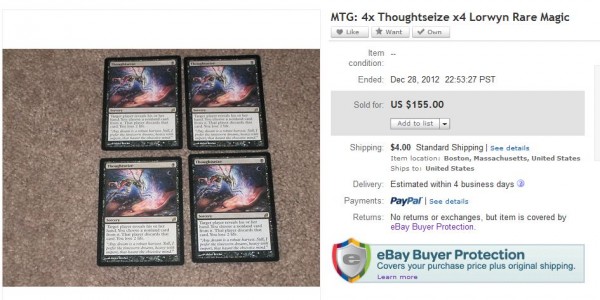 The other listing is still there as of Saturday morning, with one watcher. It is also the only Buy it Now listing for a set of Dark Confidants.

These cards are auctioning on eBay very close to retail. In fact, Star City Games currently has Tarmogoyf listed for $99.99, though they are sold out.

The decision to sell these cards was a difficult one. I’ve had them in my possession for roughly three years, and the Tarmogoyfs in particular have additional emotional ties. BUT these Magic Cards are not unique. I will have an opportunity to acquire them again, and because of the current price spike and impending price drop from Modern Masters, I decided it was time to move these. When Modern season is over and everyone speculates on what will be reprinted, I should have an opportunity to buy these again – at a reasonably lower cost.

I wanted to share this decision with my readers so that they could evaluate similar decisions for themselves. Jund is the most popular deck in Modern right now – this won’t last forever. We already know with certainty that Tarmogoyf will be in Modern Masters, and I am predicting Thoughtseize and Dark Confidant will also make an appearance. It is the perfect storm to unload these cards now at their peak prices, with a likely opportunity for re-entry in six months. This shouldn’t be a surprise – we all know these cards are at a peak right now. Logic has overtaken emotion for me, and I’m moving these expensive cards at their peak.

Aside: Everyone should have already noticed this, but be alert that Verdant Catacombs has transcended as the most valuable non-blue Zendikar Fetch Land. A couple weeks ago, people were indifferent to which Fetch Lands I traded them. They valued non-blue fetches at $17 in trade across the board. Should you be presented with this option, I’d keep the Verdant Catacombs if I were you. Star City Games agrees with this price discrepancy, by the way – they are charging $24.99 on Catacombs now while still only $19.99 on Arid Mesa and Marsh Flats.

Sunk Costs, Outside View, and other Psychology Tidbits

Part of my motivation to overcome any emotional ties to my expensive Modern cards stemmed partially from the book I just finished: Thinking, Fast and Slow by Daniel Kahneman. The book describes in detail how humans often make decisions that deviate from the “rational econ.” Sometimes logic would dictate one course of action, but human brains are wired to choose an alternative.

Consider this simple example: Would you rather have a 90% chance of winning $100 or a 100% chance of winning $85? Most people including myself are risk averse when dealing with upside, and so we choose the sure gain. The gamble has a higher utility, which can be calculated as the sum of the product of probabilities and outcomes (i.e. $100 * 90% + $0 * 10% = $90). Since humans prefer to lock in gains vs. gamble, they are prone to choose the risk-averse option.

Now consider a different example: Would you rather have a 90% chance of losing $100 or a 100% chance of losing $85? In this case, many people are inclined to take the gamble. They figure losing $85 for sure is terrible and with the gamble they may actually be able to avoid losses altogether. When dealing in losses, people tend to be more risk-seeking. This observation is a part of prospect theory, which shifts utility curves away from straight lines and towards a curve. Notice how the gains slope near the origin is much smaller than the losses slope near the origin. We are much more sensitive to losses than gains when it comes to perceived value. 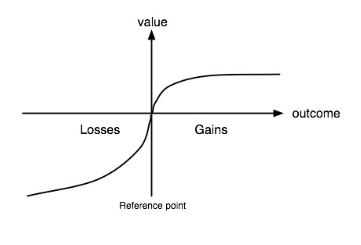 These concepts can be applied to the realm of Magic speculation. As an example, consider the 8 copies of Aluren I purchased a few weeks ago. By the time my order from ABU games arrived, the card’s value had doubled. I was sitting on a nice profit and I was faced with a choice – sit on these cards with the hopes they rise further, perhaps due to a breakout in Legacy, or sell the cards to buy lists for a modest profit. Being risk averse, I decided to take the sure profit instead of the gamble. This worked out favorably, in my opinion, even though I could have potentially gained more by taking the risk of holding these cards.

But another example may not have turned out so profitably had I followed the observations of Kahneman. When I bought 20 Nivmagus Elementals, I already knew I had struck out on this spec by the time the cards arrived. So I was faced with a decision: take a sure loss of $10 by selling these right away or hold them for a 10% chance these can net me a negligible profit (with 90% chance these drop even further, leading to greater losses).

In this case, humans often default to the risk-seeking option. This is why when we have a speculation that doesn’t pan out, we are so eager to hold. Not only do we not want to admit failure, but we also want to hold out for that tiny percentage likelihood the card does take off. In the meantime, we are accruing more losses as our [card]Nivmagus Elemental[/cards]-like cards slowly approach bulk rare status (chart from mtgstocks.com).

The moral of this observation: I find I benefit most when I sell. I have an appreciation for locking in gains and remaining risk averse in these scenarios. But when sitting on a speculative play that didn’t play out well, I would still prefer to cut losses and sell even though the human mind is more inclined to be risk-seeking in this scenario. Rather than sinking more costs into an unsuccessful speculation by holding longer, it can be better to simply cut losses and sell right away.

To help take an objective view of a situation like this, Kahneman recommends taking an “Outside View” of the situation. Such a view can help combat the emotions involved in speculation. The procedure is elegantly simple (though I’m not sure how easy it would be to implement in practice).

This practice can be applied with 20-20 accuracy to the Nivmagus Elemental speculation.

Thus, I should not have bought into this speculation so heavily.

Based on my risk adversity, I have decided to sell my top three Modern staples. I feel I should be able to net a profit when Modern season ends and prices settle down due to Modern Masters release. Therefore I have decided that the economic approach would be to sell now and ignore emotional attachment. I was ultimately able to overcome emotions because my nature is to be risk averse when dealing with profits, as suggested by Kahneman.

I’m not saying this decision is best for everyone. Since I play Melira-Pod in Modern I don’t need any of these three cards anyway. If you plan on playing Jund this PTQ season, you really don’t have the same option I have. But if you have any copies of Tarmogoyf, Dark Confidant, Thoughtseize or other Jund staples you aren’t using, I would suggest selling here and now.