After a couple months of Return to Ravnica, the Standard metagame finally seems to be settling. A quick look at the Top 8 at the latest SCG open from Las Vegas solidifies this point. 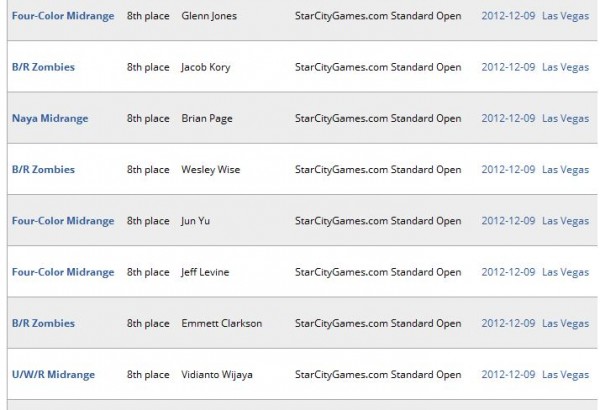 In short, you’re either playing Zombies or some form of Midrange deck that likely includes Thragtusk and Restoration Angel, with the U/W/R Midrange deck being an exception.

This metagame is fairly boring for the speculator – we’ve seen all these decks before at least in some form, and I do not see much opportunity for price shifts. Sure, Thundermaw Hellkite is achieving Bonfire of the Damned-like status and Loxodon Smiter may be a reasonable sleeper pick.

But I am not seeing true innovation in the form of Craterhoof Behemoth and Sphinxs Revelation. Not even a quick flip like Rhox Faithmender.

Because of this, I am going to shift focus this week to Modern. Modern season is nearly upon us and this past weekend’s GP in Toronto showcased the latest metagame for the format. And while there were not any major breakouts (at least not after Day 1), I still feel like there are some financially relevant facts worth highlighting going into January.

The Modern Spike Is Back

During the last Modern season, many staples did see a bit of a price bump. Looking at the plot for a card like Tarmogoyf, you can see the Modern season spike in April within the graph.

The same trend can be seen on other Modern staples as well, such as Cryptic Command (chart from blacklotusproject.com). 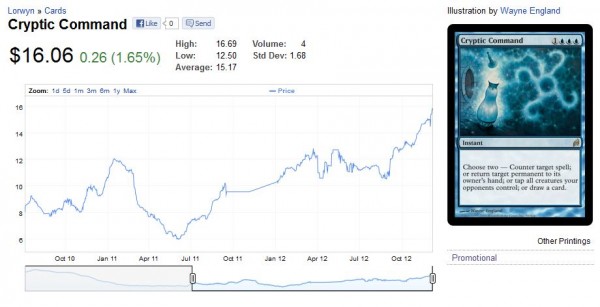 Only in the case of Cryptic Command, a card is seeing an even greater price spike in anticipation of the next Modern season. Almost one year later, some of these Modern cards are slightly harder to find due to normal card attrition and a small increase in the format’s popularity. Thus the additional price spike on a card like Cryptic Command or even the Zendikar Fetch Lands shouldn’t be too surprising.

Because of these price increases, I believe Modern is the format to make some profits on in the next month or so leading up to Modern PTQ season and Gatecrash release. Although many of the price jumps have already begun, there may be a small window remaining to acquire some Modern staples at a discount from other players.

Some Pickups of Note

MOTL and eBay have been my largest source of Modern acquisitions, though I’d imagine trading in person could also provide additional opportunity. I recently bought a set of Cryptic Commands for $44 on MOTL only to see that the cheapest Buy It Now listing on eBay is $70. It took a week, but I finally managed to unload my set for some profit.

Vengevine is another one of those overlooked cards. I’ve seen copies sell on MOTL as low as $9 and eBay auctions sometimes end a tad bit higher. But Buy It Now listings on eBay are still cheapest at $60 for a playset. Star City Games has maintained their price of $17.99. Vengevine only has to have a so-so performance during Modern season and he will pay off. I wouldn’t pay more than $11 on this creature, but seeing as I’ve bought 8 copies in the last 2 weeks for under $10, there could still be some opportunities to acquire these at discounted pricing.

I’ve mentioned the Eldrazi creatures in previous articles, but no Modern article would be complete without their recognition. I still cannot believe Ulamog and Kozilek retail for $29.99. And that foil Kozilek, Butcher of Truth I bought on Card Shark for $38 finally has its first bid on eBay: at $59.99. This is still a full $20 below retail and the bidding may not end there.

Needless to say, many people don’t realize how much Rise of the Eldrazi card prices have risen in general. Linvala, Keeper of Silence anyone? (chart from blacklotusproject.com).

As a general catch-all, any Modern staples that are not in the spotlight and are not prone to reprinting in Modern Masters could be a strong pickup. I wouldn’t rely on massive returns from Zendikar Fetch Lands simply because they are already on everyone’s radar. On the other hand, something like Linvala, Vengevine and Raging Ravine may be a better pick-up. Interestingly, the last time Raging Ravine saw a spike was back in April – once again driven by Modern season.

A Tougher Question: Time to Sell?

Wizards has made it very clear they want Modern to be a premier, affordable format. Tarmogoyf is not too powerful for Modern, but is currently too expensive – hence the upcoming reprint in Modern Masters. I fully expect other costly staples such as Dark Confidant, Thoughtseize and Vendilion Clique to also get a reprint.

This is where the contradiction comes in. Wizards wants Modern to be affordable and so they are printing Modern Masters, but at the same time we are being calmed by the notion this set will have a very limited print run. I understand the need for a limited print run as we do not want to see another Chronicles. However, if the print run is too low, prices won’t drop a whole lot, negating the purpose of the set. I anticipate Wizards will print enough copies to bring prices down significantly, though, of course, not the same magnitude as Chronicles.

If we carry this assumption, then the potential implications on our Modern portfolios are noteworthy to say the least. I don’t want to be sitting on Tarmogoyfs and Bobs if the price is about to reduce by 50% in six months. It isn’t good for business. So what’s the right action to take here?

If I want to put finance first, then I strongly believe I should be selling out of my expensive Modern staples next month during the Modern price bump. There will be three months of everyone needing Tarmogoyfs for their Jund PTQ decks, and selling my playset for $300 seems like a strong play. The same goes for Dark Confidant and Thoughtseize, which have already seen a small bump (chart from blacklotusproject.com).

It may pain me to part with these trusty staples, but the decision seems 100% correct from a strict financial perspective.

Selling my expensive Modern staples prone to reprinting seems like a no-lose situation. If Wizards reprints these in Modern Masters, their prices will drop some, minimally from people panic-selling. If they don’t, then I will happily run my cheap Melira-pod deck during PTQ season and buy back into these staples in a few months when the inevitable price drop occurs (see July-September in chart above). Either way, I’m not parting with any cards for good and there will be ample time to re-buy.

So while everyone is closely watching Standard and waiting for the next big thing, I’ll be looking to sell out of Modern. I haven’t decided on the best time to do so – perhaps it’s in January and perhaps it was two weeks ago. I also haven’t decided on the venue to sell. MOTL seems like a strong option since I can avoid eBay fees, though if eBay prices average more than 15% higher, then the fees may be worth it.

All I’ve decided at this point is that the time to sell out of Tarmogoyf, Dark Confidant, Thoughtseize, Vendilion Clique, etc. is now. Otherwise I will be left holding a Modern collection of less value when Modern Masters comes around. And even if Modern Masters drives prices up in the long term due to increased interest in the format, I am confident there will be at least a small window where people panic-sell and these staples will be acquirable at lower prices than today's.

5 thoughts on “Insider: The Modern Spike and Modern Masters”