This past weekend was the Gatecrash prerelease, and we finally got to play with some of the spoiled cards. We learned how a few things worked, and got a chance to pick up a few cards. So, before we get thrown face-first into Gatecrash Standard, I wanted to take a quick look at a few cards we can expect to see in Standard in the coming months.

Champion of the Parish has been on my radar for a while now, since it was as low as $3.50-$4 in cash. It is worth $5 on TCG right now, and has been very slowly creeping back upwards. I have seen some deck musings that cut out the humans theme altogether, but the Human deck is much more resilient, and that can be what matters in a large Standard environment.

Huntmaster of the Fells // Ravager of the Fells is very popular, and I see it holding its value or gaining a bit. Two toughness is a popular spot, and the card adds huge value to nearly any board state. I could see this card at $35 in the future fairly easily. At $27, it isn’t much of a cash pickup, but I wouldn’t dump what you have.

If Red Deck Wins or a non-human deck becomes big alongside humans, we could see Stromkirk Noble increase in popularity to combat the human decks. This once-$8 card has all but disappeared from trade binders in my area due to it being from 2011. I love this at $2.50-$3.

Aggro, Not the Only Contender

Importantly, we have a lot of cards that can hurt aggro decks badly. It could be possible for control, either Esper, 5-color or Monoblack, to break out and grab control of the format.

Thragtusk has dropped a bit, and it is around $18 right now. However, eBay auctions are ending between $11-$15. With Skullcrack in the format, I can see Thragtusk decreasing in value. When it does, it should be a great pickup at $10-$12.

We know all about Rhox Faithmender. It increased to $4 from bulk/casual rare recently, and it shone on sideboards everywhere to take out R/B Aggro. However, cards like Skullcrack may make lifegain worse and worse against aggro. We may see people resorting to sweepers to get the job done.

An important deck we’ve heard about on the grapevine lately is Monoblack/Mostly-Black Control. The deck runs almost all Swamps (often in the form of shocklands), tons of removal, and the card I’d like to mention: Mutilate. Mutilate can not only take out Predator Ooze, it is also a very efficient sweeper. The M13 version has dropped to $2, and that is way too low.

Really, any deck that can hold back aggro for a few turns and play something big has every right to win. Any card that accomplishes that job but is low right now is probably a good pickup.

I like Supreme Verdict right now. One of the big reasons is because during aggro-heavy Standard it goes for about $2 each on eBay (if you buy the right auctions). During pre-RtR Standard, I would buy playsets of Day of Judgment for $3, and trade the sets at $8.

So, in light of my last article, and considering foils are now on preorder, I’d like to mention a few foils that are likely to see an increase. 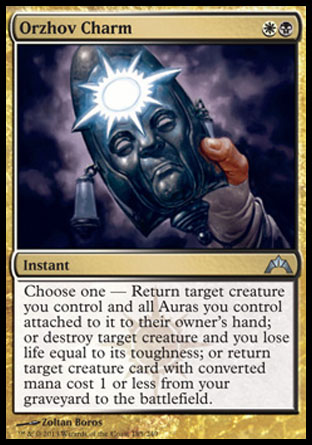 Orzhov Charm –- This card is preordering at $3-$4. That sounds high, but I really love this card and foil Boros Charm is $9 right now. Already an auto four-of in any Martyr Proc deck, if Orzhov Charm sees Standard play I’d call it a pickup at $3.

Smite –- I’ve heard a lot of talk about this card. Snapcaster Mage flashed in, blocks a large creature, Smite it from the grave. One-drop removal is a thing in this set, and this card is $.49 on most preorders.

Devour Flesh –- This is a much cheaper Tribute to Hunger. Gaining your opponent life can be bad against larger creatures, but in a control shell you just need quick removal. Then, you can slowly take over the game. I have seen $1.5 on foils for these, which could be a great opportunity. It gets rid of Geist of Saint Traft too.

Ghor-Clan Rampager –- The best pump spell ever printed, and uncounterable too? Worst case scenario, it’s a very efficient creature. I love these at under $2 for foils.

It seems there is a general consensus among a lot of us on this, but Chromatic Lantern is a great pickup at $2-$2.5. The foils will always be expensive, as this is an auto-include in any two-plus-color EDH deck.

Merciless Eviction will be a great EDH sweeper, and therefore an expensive foil. In a few years, we could see this at $15-$20 foil, with regular ones at $3-4. At this time, we will probably see it slowly drop, and foils could hit $4-$6. I love them at that price.

High Priest of Penance –- A Vindicate on a stick can be good, and with a bit of protection in EDH, this card can do very well. It is $5 nonfoil and $11 in foil right now, but if it loses favor in Standard, we can likely get some foils on the cheap.

Don’t forget, a new set means increased demand –- try to stock what people want. New shocks will fly out of your binder, so if you have access to them cheap, pick them up fast and trade at a premium.