I have been more active than ever on eBay these past couple weeks. I've been doing my best to win some cheaper auctions on my latest spec targets, and I've been selling a good deal via Buy it Now listings. On Modern staples, especially ones which are spiking, I’ve found that eBay has generated better revenues than MOTL could. It seems eBay shoppers are willing to pay the average Joe near-retail prices, whereas MOTL sharks are still just that: sharks.

I've been so active because of the latest buzz in Magic. Modern season is in full swing, Standard is bracing for a new set, and we just had a 700 player Legacy GP in Denver, Colorado. Needless to say, there is much to discuss across all three of these formats.

My preference is to spend the vast majority of this article talking Modern – after all, many of the recent price jumps have been due to this format. Thus, most of my recent dealings on eBay have been in Modern. But it would perhaps be unfair to our Standard and Eternal players out there for me to do so. I will try to touch on the some noteworthy shifts for all three.

Where to begin! Many of the fastest moving Modern cards have already been covered in the forums, but I still think there’s value in summarizing a few. For example, here’s the result I get when I search “4 Sylvan Scrying” on eBay: 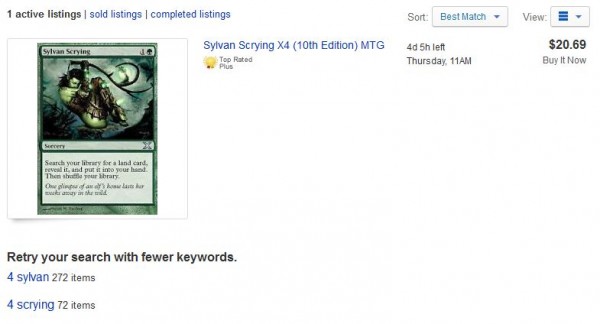 But a similar search on Card Shark yields very different results (as of Sunday morning): 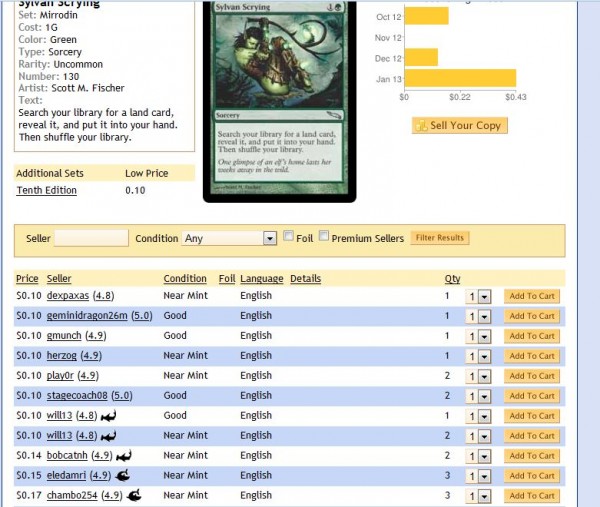 This image doesn't even capture the magnitude of this polar result. There are well over 60 copies of Sylvan Scrying under a buck across Tenth Edition and Mirrodin. Many sellers even have multiples, and playsets could surely be purchased for less than half of the only eBay listing.

Clearly the eBay seller is delusional – that playset is not likely to sell. But this discrepancy highlights why I've kicked up my eBay selling lately, despite the fees. Behavioral Economics would predict that if I list a playset on eBay for sale at a noticeable discount to the one listed (say, $9.99/set), it’s quite likely mine would be purchased because of the perceived “discount”. This is exactly what I intend to do, in fact, once the 25 copies I just purchased arrive.

Another example of this phenomenon is the recent movement on Serra Ascendant. The last two copies to sell on eBay sold at a price that might surprise you… 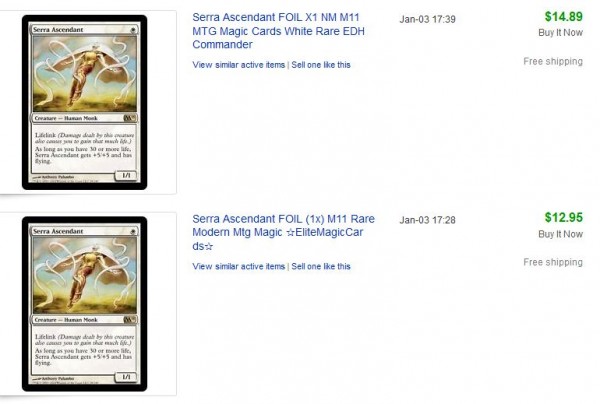 This card was retailing on Star City Games for $5.99. Card shark even has a couple copies still under $10 shipped. Yet once again we see eBay outpacing even retail prices, and the cheapest Buy It Now listing is for over $15 shipped – quite the premium over SCG, for now. My hunch is that when SCG relists Serra Ascendant, the price will be much higher. I predict $9.99. but it may take a couple incremental steps in between first.

Other Modern movers are less surprising. Thoughtseize is sold out at SCG at $49.99. There are about ten SP copies of Dark Confidant in stock at $44.99. What’s interesting about this one is that these sell for about the same on eBay – I just sold my set of SP Bobs on eBay via Buy it Now listing for $195 shipped. This means that even after fees, I’m coming up just a couple bucks shy of retail.

Another eBay vs. rest of world discrepancy is notable with Inquisition of Kozilek. SCG has a bunch of SP copies in stock at $5.49, but there are only two sets listed as Buy it Now’s on eBay, both with a higher price tag (disclaimer: the first one is mine; Edit: 2 hours after writing this article, my listing sold via Buy it Now!). 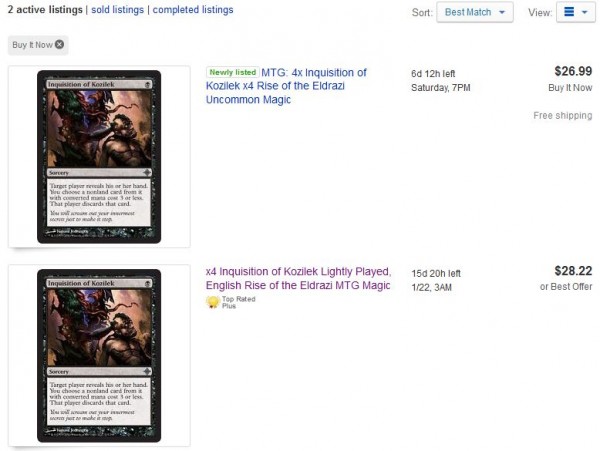 There are two key messages I want to emphasize here. First: some Modern staples are surprisingly on the move, while others are less surprising. But secondly, and more importantly, I've had some decent success selling Modern cards on eBay for near-retail prices. No matter how many retail stores there are, you’re bound to find the buyer who snap-buys from eBay simply because they assume eBay is cheapest.

There will likely be multiple financial reviews of Gatecrash as the set’s release approaches. It’s never been my style to look ahead with new sets – Angel of Serenity aside, my message is almost always “don’t preorder cards”. My strategy has been, and continues to be, focused on buying strong cards already in Standard which will no longer be opened in packs.

Of course, with the unique draft structure of Return to Ravnica block, this alters slightly. People will be opening more Deathrite Shamans once Dragon’s Maze is released. Still, the window to pick up some cheap RtR cards for Standard speculation is open. Rather than buying up Deathrite Shamans, which have already spiked considerably, I’d prefer trading for Supreme Verdict (chart from mtgstocks.com). 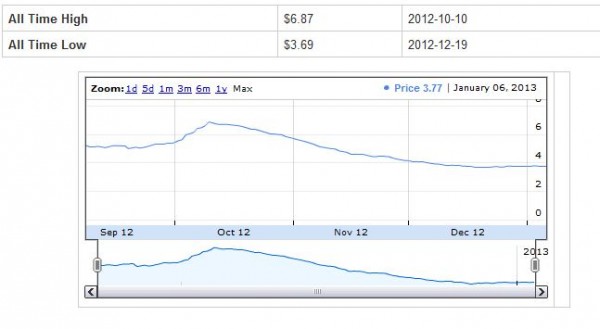 A few months ago my “buy-solid-board-sweepers” strategy paid off when I invested in Terminus at a $2-$3 price point. Now that Supreme Verdict has reached similar price points, especially on the occasional lucky eBay auction, I’ve decided to repeat the strategy.

This spell is a control staple and will be prevalent during its tenure in Standard. And while the price has been dropping steadily since release, these may be fading away from trade binders once Gatecrash is released. The trend is not unlike that of Terminus (chart from mtgstocks.com).

The other rare removal spells may also be worthwhile trade targets over the next few weeks. Detention Sphere is very cheap right now considering it’s better than Oblivion Ring, which saw significant play in Standard. Even Dreadbore may be worth grabbing if cheap enough.

The other Standard card I have on my radar is Jace, Memory Adept (chart from mtgstocks.com): 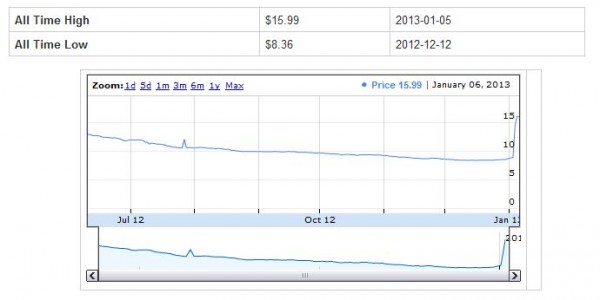 This Planeswalker has spiked recently due to the spoiling of the new Duskmantle Guildmage in Gatecrash. While just the one Human Wizard may not be enough to enable a viable mill strategy, many are hoping this theme appears multiple times in Dimir.

Just one or two more cards that punishes your opponent for milling would be enough to drive Jace, Memory Adept to $20. It’s already $16, an all time high, thanks to the Dimiar Guildmage. But at this price, I can’t advocate buying again until the card wins a sizable tournament.

Reading up on the latest GP Denver buzz, it seems that Elves has made a reappearance. But the version LSV ran also included Natural Order and…Craterhoof Behemoth??? According to the coverage on Wizards’ site, this is indeed the play:

Legacy continues to amaze me with its diversity. On any given weekend, even strategies that date back many years can somehow surge to the forefront of a premier event. This is but one example of that.

But what are the movers here? Natural Order is an expensive card to speculate on, but it’s also near a three-year low. These may get some notice yet again. In fact, combo decks in general seem to be making a resurgence.

Some BUG decks have moved Force of Will to the sideboard in favor of Hymn to Tourach in order to gain an edge in the mirror. This is music to the combo player’s ears, and I for one just may sleeve up Ad Nauseam Tendrils once again. Perhaps I won't be selling my set of Lions Eye Diamonds just yet.

Many Legacy price moves occur slowly due to the maturity of the format, but opportunities to trade hyped Modern cards such as Serra Ascendant for depressed Legacy staples like Natural Order cannot be passed up.

As I mentioned at the opening, this has been a busy few weeks for me in MTG Finance. I constantly have a few listings on eBay and I buy cards on average of more than once a day. With so many price moves across all three formats, it’s difficult to sit on the sidelines for too long. These are just some of my observations, and I suspect next week will bring even more.

Thus is the beauty of the internet and MTG Finance.

11 thoughts on “Insider: Market Trends in Standard, Modern and Legacy”