Nothing is more exciting to someone who focuses on Limited and speculation as spoiler season. I’m anxious to get my hands on some new boosters with new guilds, as well as start targeting some new cards for speculation of this upcoming season. Once we get a larger portion of the set spoiled, I hope to do a full review of the cards spoiled, but until then I want to talk about somethings that are “Glaring” at me. One of them being that Glaring Spotlight is not actually a card.

The card that has me most motivated to start making moves is Boros Charm. Boros Charm has the expected cost of RW and has three modes that are all extremely strong in an aggressive deck. 4 damage to target player; all permanents you control are indestructible this turn; target creature gains double strike until end of turn. The first and the last mode are directly related. This spell will do 4 damage, unless it can do more via the last mode. While the 2nd mode counters a Supreme Verdict, Abrupt Decay as well as any other removal spell, really a better Negate for the decks that want this effect.

So, in my eyes, it’s not whether or not a “Tribal Flames Zoo” style deck appears in Standard, its more, “What will it look like?” 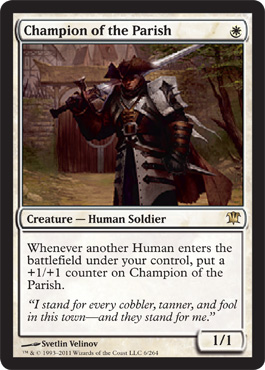 I see two potential variants arising. The first would be a Humans sub-theme. In such a deck, we’d see a primarily Boros deck, that might or might not make room for Green, but would have their nut-draw starting with a T1 Champion of the Parish. Champion can be found around the net at approximately $4. If Humans is a deck that sees top level play, this will be the card that will be hardest to acquire. I could see $4 quickly becoming 6-7, and this is a card that I’m going to get at least 2 sets of.

The humans theme version would likely also include Zealous Conscripts, Silverblade Paladin and the newly spoiled Boros Elite and Frontline Medic. While I see these other cards as slots people will constantly have in flux as the format changes over time, the Champion will be the mainstay and is the best investment. However, Boros Elite might be underpriced at $0.25 preorder, and it’s safe enough that I’m going to pick up a set at that price now.

I do think Legion Loyalist may have a spot in this deck, it will depend on testing to see if the non-Human one drop makes the cut, or if Stromkirk Noble is better, or maybe the Human theme is too cute and they both make the cut over Champion. In either case, I’m not willing to buy into the Loyalist at $4 pre-order, but I don’t think it’s price tag is too far off the mark.

Separately, we may see a more green-heavy Naya aggro. This deck would feature cards like Strangleroot Geist, Huntmaster of the Fells // Ravager of the Fells and maybe even Hellrider. Cards I’d like as speculations in such a deck are Daybreak Ranger // Nightfall Predator and/or Ulvenwald Tracker. Daybreak Ranger // Nightfall Predator has fallen from grace since originally hyped by Brian Kibler shortly after being printed.

However, cards that allow your creatures to fight your opponents are great at breaking open Mid-range mirrors and allow the mid-range deck to apply immense pressure on the Aggro-deck to not simply fold. Both of these cards are easily found under $1, and I feel they don’t have much room to fall. I am going to pick up a set of each, and see where they go. I also think Ghor-Clan Rampager would appear in a deck like this, and at $0.50 I want to preorder a set of him too.

I’m also simply getting more and more confident in my Nephalia Drownyard move, that I’m going to continue to move in deeper. As Thragtusk remains a huge part of this format, and people are gaining large amounts of life via Sphinx's Revelation and Rhox Faithmender, ignoring your opponents lifetotal will be fairly impressive.

Further, Dimir Charm is an awesome Snapcaster Mage target that allows this deck to have even more versatility. Dimir Charm’s interaction with Curse of Death's Hold means that it will actually kill many more targets than you’d think. I envision Mutilate to be a huge boon to this deck also, and with the full cycle of shocklands legal, this could be a real thing. Copies of the core set printing can still be found online for under $2. Should this be the control sweeper of choice (circumventing Boros Charm protection) it could easily double in value. As it’s a deck I want to play, I’m picking mine up now, but I’m not incredibly confident it will move too much.

So far we have a couple new deck ideas to consider that aren’t just simply adding new cards to existing decks. Are there others that will appear? Will existing decks just pick up new tools? As spoilers continue to come in we’ll continue to adjust our opinion of the upcoming months, but I’m feeling good about the things that are popping out this early. Simic isn’t really making a splash in my opinion. No obvious pieces to include in the Bant Control shell, and not enough power for me to envision a strong tempo deck appearing. I do think Ohrzov may make the U/B control deck I’ve been dreaming up into a more Esper focused build, but I’ll want to see more before I start destroying my manabase.