It took a bit of trial and error, but I finally have a Delver list that I’m happy with. Ultimately I didn’t come up with a list that does any one thing that other lists don’t, but the combination is rather unique, and the list might look rather odd at a glance. Here’s the list:

There are a lot of directions that this deck can be taken and changing one or two slots can dramatically alter the way that the deck is played. I’ve gone the route of building a control deck that is pretty good at attacking. Let’s break it down in my typical fashion, highlighting cards played and notable omissions.

For the most part the creature suite is comprised of creatures that block well. There’s a lot of Monogreen Stompy and Monored Goblins running around so having creatures with 2+ power and toughness matters a lot. If you can’t at least trade with Nettle Sentinel and [card]Goblin Cohort then you’re not playable. It also doesn’t really matter what your creatures look like against Post decks because they either die or they don’t.

Stitched Drake is a card that hasn’t really been played in anything since being featured as a miser’s copy in Illusions in Standard. It serves the same role in this deck that it did in that deck; breaking creature mirrors. It’s about as big as they come and serves as our fifth copy of Spire Golem. It’s less dependable but more powerful. We’ll almost always have a dead Phantasmal Bear to cast it, and I haven’t had trouble with the drawback thus far. I do board it out in the mirror because Vapor Snag is a thing, but that’s not super relevant.

All three of these cards have games when they seem very good but they also have games when they perform extremely poorly. Time was when you could see the glow in my eye as I picked up a Mulldrifter to put in a ninja, but Pauper is just a different animal now. It’s just too inefficient these days and I honestly can’t remember the last time I hit somebody twice with the same Ninja. Running into opposing Spire Golems and Sea Gate Oracles is just too embarrassing.

When Infect was a deck Spellstutter Sprite was necessary as nothing else than another Counterspell. While it is still able to counter something in about every matchup, the spells that it counters have become less relevant and the body has become basically worthless. It’s also just way less good if you’re not Ninja-ing. This isn’t Spellstutter’s time.

I haven’t played a ton with Frostuburn Weird, but it wasn’t accomplishing the one role that I wanted it for well. It’s just too inefficient to leave up a mana every turn to make your Horned Turtle into a creature than can trade only to have it Lightning Bolt near constantly. The inefficiency was also prevalent in games when I needed to be aggressive, and the card was solidly disappointing.

There’s not much more to say here than that cantrips are good. They’re the spells that allow you to operate on such a low land count and Gush speaks for itself. Gitaxian Probe gets sided out against the aggressive red decks but they’re not a large enough percentage of the metagame to not want to play a free peak.

So, Brainstorm in a format without fetchlands is an interesting one. The card still has a good amount of power, but it’s not good to cast in the early game and it doesn’t generate the card advantage that Gush does. Brainstorm gains its power in Pauper from waiting until the last possible turn to cast it and then, hopefully, winning on that turn. It’s really awful to have in your opener in the absence of Preordain/Ponder and often enough you won’t have the mana to waste burning through two spells at sorcery speed. I’d consider trimming Gitaxian Probe for one or two but I believe it to be a far cry from a staple.

It’s also worth mentioning that Brainstorm really isn’t adding anything to the deck if you’re using it to flip Delver. Delver does a great job flipping on its own and it also does a great job of dying a lot of the time. You gain so little from using Brainstorm in this fashion that it’s really not worth considering.

I also see players frequently keeping land light hands and using Brainstorm to try and find lands aggressively. This line is almost always terrible. Locking yourself off of land drops for the next two turns is a very real possibility, especially in a 16-18 land deck. It’s just way too greedy.

The bounce spells aren’t anything out of the ordinary and they just make sense in a tempo deck. Curse of Chains isn’t in every list, but it’s a card that has been performing very well. You won’t always be able to get enough value out of your bounce spells to win games and sometimes having an actual removal spell, either offensively or defensively, can make all the difference. It’s especially good against opposing Spire Golems and Razor Golem, which have a tendency to get the better of you if you’re unable to counter them.

Counterspell is a no brainer. Deprive isn’t in a ton of lists, but having the fifth unconditional hard counter matters a lot against slower decks. Not having the counter for Mulldrifer or Serrated Arrows can just be disastrous.

Daze is a card that I board out a lot, but it has been solid. As others have told me, almost nobody plays around it. It’s pretty satisfying to get people, though if there comes a time when people actually start respecting it there is no reason that a monoblue deck should ever want this card. Even with Delver the clocks that the deck presents just aren’t fast enough and the deck has no reach. Daze is conceptually awful but it works surprisingly well in practice. It’s definitely important to note whether your opponent is respecting it or not when it comes time to sideboard though, and it’s always awful against Post whether they are afraid of it or not.

Dispel has long been one of my favorite cards in Pauper. It wins counter wars and it’s awesome against removal. The ability to probe on turn one and then play Delver with Dispel backup on turn two should not be written off. Sometimes that’s the whole game when your deck is this creature light.

So, Exclude is a very powerful card, but I just can’t abide the inefficiency. Two for ones are nice but the creature heavy decks are loaded with one drops and the decks playing more expensive creatures tend to be the decks that are capable of fighting counter wars, where inefficiency really hurts you. I think the card is fine as a one of but I don’t see it as necessary. If I were to play it I’d play it over Deprive but I like the hedge in counter wars and against Serrated Arrows and Rolling Thunder.

Next week I intend to go over various matchups and the sideboard, which I think in Pauper more than most formats depends a lot on the choices that you make in your maindeck. In case you want to get battling right off here’s the current sideboard: 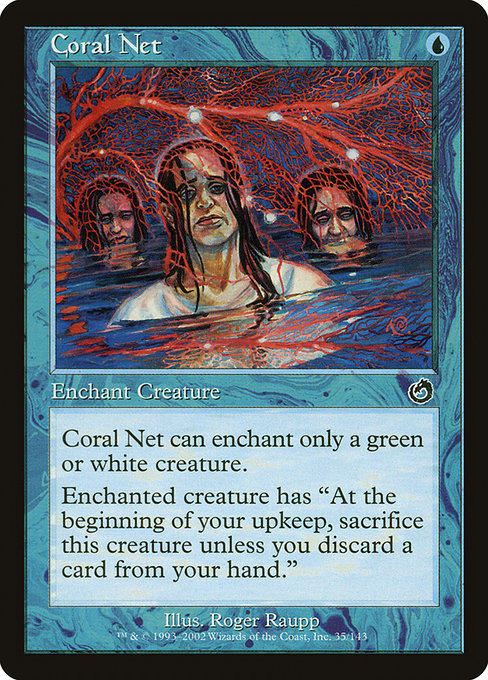 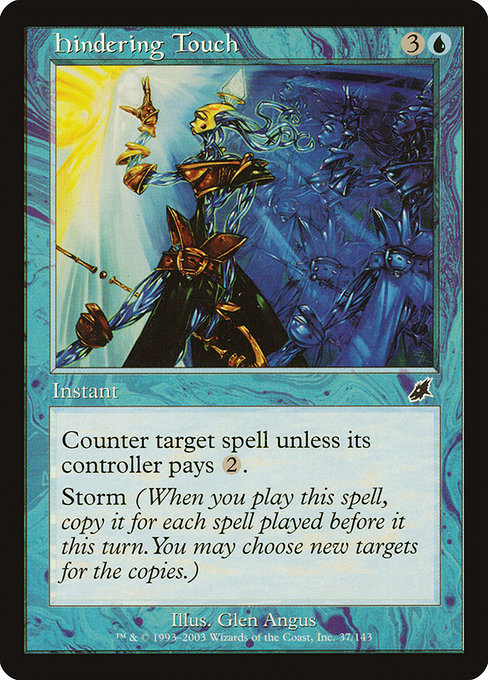 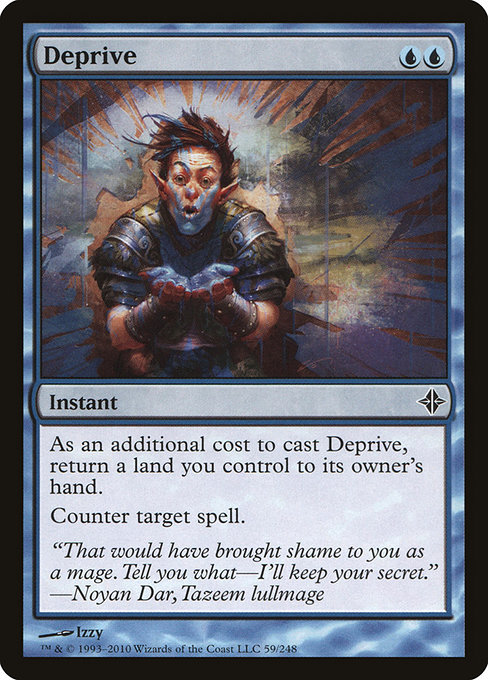 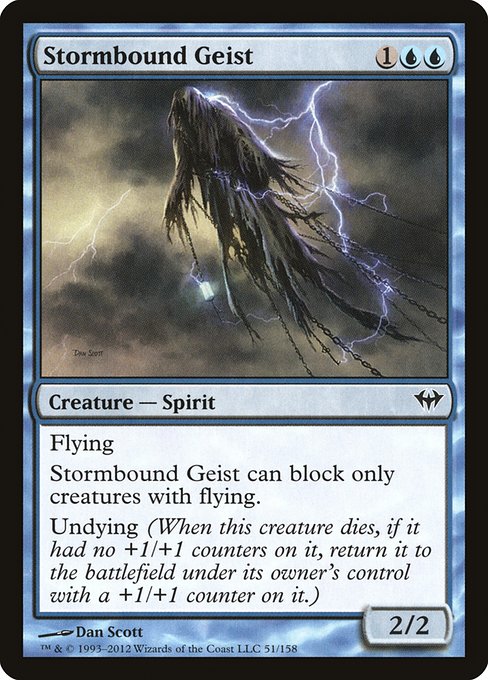 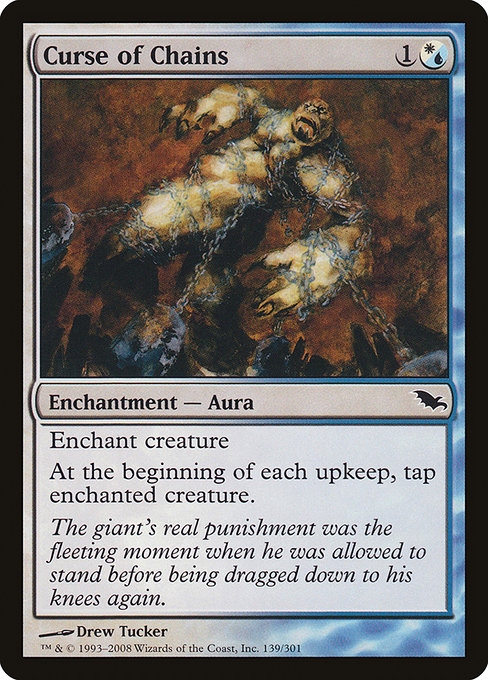 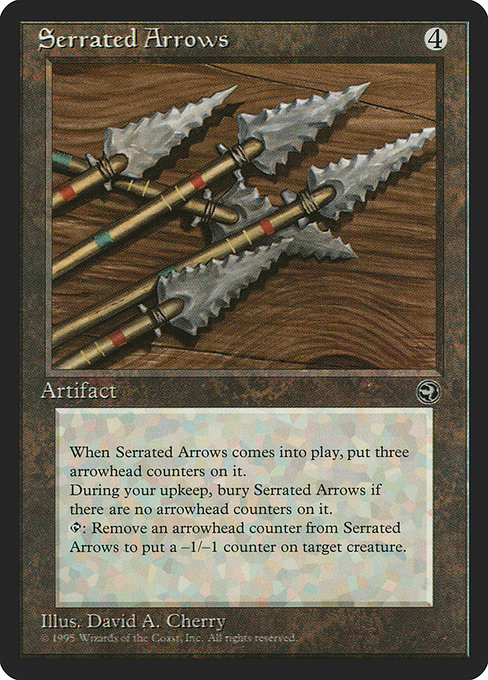 That’s it for this week. If you enjoy grindy aggro/control decks then by all means give this one a whirl! It’s a bit expensive as far as Pauper decks go but I think the total deck is only in the 50-60 tix range and it’s very competitive against the major archetypes in the format, and the general strategy won’t be going away anytime soon short of a ban.
Thanks for reading.

19 thoughts on “Delving into Pauper”