It may seem like Modern has settled based on the price trends of certain cards. Spellskite, for example, had tripled in price before pulling back down below $10 again. But the craziness hasn’t ended yet. Take a look at one of the latest culprits, Oblivion Stone (chart from mtgstocks.com).

In fact, so many cards follow a similar trend of skyrocketing in a matter of days and then immediately pulling back. It’s almost like the speculators take notice, buy out the internet, and then flood the market with copies yet again when they inevitably list theirs for sale in an attempt to profit. Spellskite, Fulminator Mage, and Serra Ascendant all followed a similar pattern.

But I really don’t want to spend another week writing about the Modern phenomenon. The examples may be different, but the overall message remains the same: I’m selling spiked cards which may appear in Modern Masters (I only wish I owned more Oblivion Stones to sell!). This strategy has enabled me to “bank” a significant amount of profits. By selling the Modern staples I acquired a couple years ago for Legacy play, I am ringing the register and taking some investments off the table.

The result: I’m left with significant cash holdings. It’s the inevitable outcome when you sell significantly more than you buy. As my Modern collection dwindles in anticipation of Modern Masters, my cash reserves are building. While this may seem great, I must remember that this cash is not gaining at a rate above inflation, and so in theory it’s dropping in purchasing power.

In other words, cash is very safe but also very stagnant. In order to grow the portfolio some more I need to get back into buying.

I remember hearing a basic mantra along these lines. “Always do the opposite of what the general market is doing”. In other words when people are buying like crazy and sending prices to new highs, I look to sell. When people are panic selling quality cards with upside potential I seek to buy. This applies to both MTG Finance as well as Wall Street.

So in this time of massive Modern price increases (Sylvan Scrying is another one – chart from mtgstocks.com), I’ve been freeing up some cash in anticipation of purchasing under-valued cards.

Fortunately, there are many – most of which are in Return to Ravnica. Right around this time is when Return to Ravnica card prices will bottom. And just like clockwork, as fewer packs of the set are opened, the powerful Standard winners will rise to the top.

The key here is to pick up cards that are played consistently in Standard today, and should be well positioned for when Innistrad block rotates out. I have my eye on many of the removal spells – both mass and spot varieties. Currently I’ve been attempting to grab sets of Supreme Verdict on eBay for under $3 each. This has been difficult, and I sense a hard price floor of $3 has been hit (chart from mtgstocks.com). Take a look at how flat, how unmoving, that price line is.

As Innistrad block rotates, we will say farewell to Terminus. Starting then, Supreme Verdict will become the premier board sweeper in Standard. And while the promo version may prevent Supreme Verdict from hitting the same highs that Terminus did, I still see this card reaching $5 cash, $8 retail in less than a year.

Seeing as this card retailed for $20 when it first came out, there is certainly some upside potential here. The increase will be gradual, but trading away hyped Gatecrash cards (I’m looking at you, Boros Reckoner) into Return to Ravnica cards like Abrupt Decay will provide stability and upside to your portfolio. Dreadbore, the other Return to Ravnica removal spell, has also bottomed. I like this one less because it’s counterable, a sorcery, and less likely to see eternal play.

Other Places to Store Cash

If Standard isn’t your area of interest, perhaps there are some longer-term opportunities worth considering. I would recommend buying a booster box or two of Return to Ravnica to sit on for a few years. Booster boxes of the original Ravnica set are reaching $400 on eBay auctions. Even if boxes of the newer Return to Ravnica reach $200, it still represents a 100% gain over the course of a few years. While less exciting than the Modern price curves observed above, I sure would be pleased with doubling up on an investment in a few years’ time. 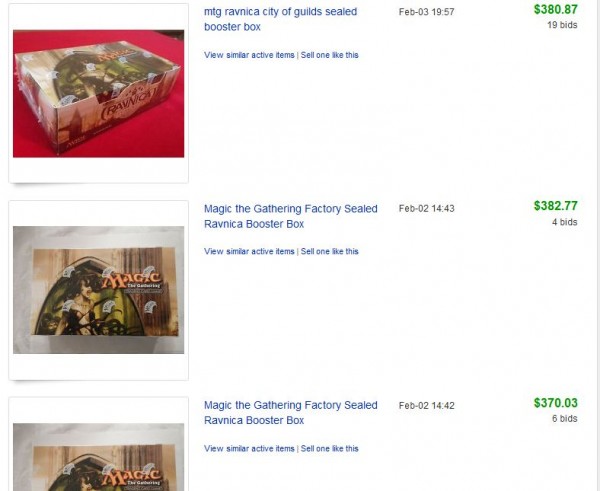 Even if you don’t want to wait that long, holding a booster box or two of Return to Ravnica will be just as safe as cash if you can buy in at around $90 shipped. It’s very unlikely the price goes much lower…ever.

If Return to Ravnica isn’t your thing, then you could keep an eye on other Standard cards. We are about halfway through Modern PTQ season, and Standard season is next. Demand for Standard staples will go up, driving prices higher. Just be careful buying into too many Innistrad block cards. There may be some profitability there, but the time horizon to sell these for profit will be short. I know I’m a bit early, but I always consider format rotation when I acquire older Standard cards. Only acquire them if you feel demand will increase significantly within a three month timeframe. If not, you may be left holding the hot potato come Standard rotation.

I’m not quitting Magic. But my collection has reduced significantly now that I’ve sold my Tarmogoyfs, Dark Confidants, Thoughtseizes, Fetch Lands and most recently Vendilion Cliques (chart from mtgstocks.com). Modern prices have absolutely gone nuts, and selling into this boom is rewarding.

But my job isn’t done and I do not intend to stop speculating. I will need to acquire new cards to start the next cycle of buying and selling. I believe with Gatecrash’s release, the time to start acquiring Return to Ravnica cards is now. What’s more, I will also prepare my cash reserves to buy back into Modern as Modern Masters is spoiled. As people panic-sell their collections, I expect this modest bubble to burst.

Again my mantra is to do the opposite of the market. Since Modern willbe around for a while I intend to buy back into the format as everyone else sells. Then as prices re-stabilize and next year’s Modern PTQ season begins I will be well-positioned to sell yet again, repeating the cycle.

- Shock lands continue to drop in the wake of the news that Dragon’s Maze will contain more of them. But as I eye eBay, Card Shark, and Amazon I am seeing some copies of Hallowed Fountain priced at $8. The drop may continue for a little more, but eventually buying new Shock Lands at $8 is going to be a steal. It just may take a while. I’m holding my copies, but I’m not shelling out any more cash for them for the time being.
- Deathrite Shaman has also stabilized in price. Looking at the price chart, it appears $15 has become the new target price point for the Elf Shaman. Since this card is slightly less ubiquitous than Snapcaster Mage, I’m wondering if this is a short term price ceiling. Demand isn’t likely to increase drastically for a few months. Then again, supply may decrease a little bit as fewer packs of Return to Ravnica are opened. Still, I may sell a couple copies here or there to take some profits off the table.
- Sphinx's Revelation still sees Standard play and I don’t think it’s any less broken with Gatecrash. But the price has been pulling back significantly in the past couple months. This is one card in Return to Ravnica that likely hasn’t bottomed yet. I may target these in trade eventually, but not at $17.99 - that’s for sure.

18 thoughts on “Insider: I Sold Into Modern Hype, What’s Next?”