As a refresher, my MUC Delver list that I wrote about last week can be found here.

When I write I generally don’t spend much if any time talking about sideboarding. Part of this is because from what I’ve seen and experienced that for whatever reason most people tend to take a ton of liberties with their own sideboards. That said, my MUC Delver list was very much constructed as a 75 card entity. There are a few slots in the maindeck that end up falling short in a number of matchups and having enough cards to bring in over them is essential. Gitaxian Probe and Vapor Snag are frequently boarded out, and having cards to bring in over them is essential. That in mind, let’s get right down into it.

In my experience the UR Post matchup is very favorable, but you have to understand what’s important. They have a finite number of spells that actually matter and saving your counterspells for those cards is clutch. Mulldrifter, Rolling Thunder and Ulamog’s Crusher are cards that must be dealt with, and unless you see an otherwise unfettered path to victory, then blowing a counterspell on anything else is probably just wrong. It’s tempting to protect your creatures or to counter draw spells but it’s usually just wrong in pre-board games. Just stop them from casting actual business and eventually one of your creatures will stick and get them.

Most of this stuff is pretty obvious. A Post deck can pretty much always pay for Daze and bouncing Mulldrifters is generally pretty poor. I have won games by doing so but it just shouldn’t be your post board plan. I like to leave the single Curse of Chains in so that I don’t always need to counter Ulamog’s Crusher and it’s also nice to stick it on the occasional Mulldrifter that you lose the counter war over.

Hyrdoblast can be kind of interesting as your opponent will be bringing in Pyroblast, so you’ll often be using it to fight counter wars rather than countering removal spells. Remember, all it takes is one or two creatures sticking to win, so there’s no need to throw counters away on removal.

Things are slightly different against UB Post as we don’t get Hydroblast, but the matchup is still quite good. Instead we board in the Hindering Touches and leave in a Vapor Snag which will primarily be used to bounce our own creatures in response to removal.

Sometimes winning this matchup comes down to some fairly abstract lines. Here’s a screencap from a game that I’m particularly proud of: 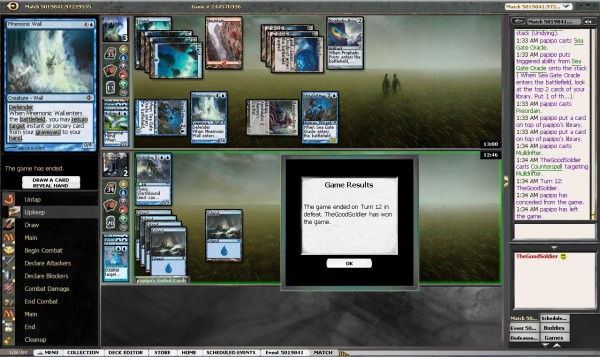 In this game I took advantage of Ulamog’s Crusher’s “must attack” drawback to undie my Stormbound Geist and get my opponent for exactly five over two turns, saving my Counterspell for his Mulldrifter that I might have just lost to.

I’d say that game one is very favorable. They’re playing a bunch of small dudes and trying to pump them for the win and you’re playing Vapor Snag along with Spire Golems.

Rancor on a Ledgewalker can be problematic, but even that isn’t the end of the world. Just remember not to be too aggressive and that blocking is your friend.

The Stompy player is going to board into Scattershot Archers and try to play the control in post board games. The Coral Net will either kill the Archer outright or stop them from doing much of anything until you can get a Serrated Arrows online. There’s only one in the list currently, but Echoing Truth on your own Arrows after the last counter is removed is a big game.

My list is built in a way that a single Archer won’t hurt too much, but they have four copies of it and four copies of Quirion Ranger to supplement them. Deal with these guys and this matchup is a cake walk.

Pretty much all of the monored that I’ve seen recently has been Goblins. I’d say that the matchup is quite favorable considering that we have good blockers and counterspells. Once again blocking is your friend. Grind them out and eventually you’ll find yourself in a completely dominant position, even if that means dipping to one life first. 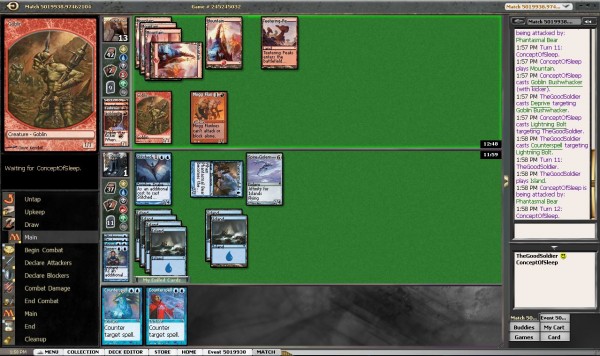 Our game plan doesn’t really change post board, we just become better at executing it. Never leave yourself dead to Goblin Bushwhacker and try to maintain a healthy life total and everything will be peachy.

The Temporal Fissure matchup was basically unwinnable before Delver was a card, which obviously suggests that being aggressive is important. They have insane inevitability and we have no actual removal for their familiars. Play a solid tempo game and you can win, but keep too slow of a hand and you’ll find yourself twiddling your thumbs while your entire board is returned to hand.

Hindering Touch is pretty strong, but it doesn’t outright win. When the Fissure deck goes off it can often generate an insane amount of mana and it will frequently be able to play a Mnemonic Wall to rebuy Temporal Fissure on the same turn it is cast. Maybe even cast the Fissure as well. For this reason it’s still important to be very aggressive, but the Hindering Touches do give us a couple turns more time.

This matchup bounces between games that are unwinnable and unloseable depending on draws, so mulliganing is probably the most important decision that you’ll make all game.

Affinity is among the toughest matchups that you’ll encounter playing MUC. They spew out 4/4s like it’s nobody’s business and trying to block them is hell. Killing them quickly is essential. There are a few different directions an affinity player can go with their build, but we’ll basically board the same against all of them.

While Serrated Arrows doesn’t exactly kill 4/4s it does make them manageable for a Spire Golem. The Curse of Chains is obviously and the Hydroblast is for the inevitable Galvanic Blast and the occasional Atog.

Coral Net is technically an option here to deal with Carapce Forger and the like, but unlike Scattershot Archer a single Carapace Forger can just kill you, so discarding a card every turn isn’t a huge issue for the affinity player. Thougthcast also makes a mockery of this plan.

This matchup is tough in that you need to be both aggressive and controlling. They’re just very good at killing you. I wouldn’t mind having a third Curse of Chains available even if I brought it in against nothing else, and exploring that over the third Coral Net on board is certainly an option.

I love a good MUC mirror, and this one doesn’t differ much from ordinary control mirrors. Most of your opponents are going to have Ninjas, so being mindful of that is important, but for the most part having four Spire Golem is going to be completely insane for my list as most other MUC lists have two or fewer. By going bigger than other MUC lists you completely embarrass their Cloud of Faeries and ultimately win the long game.

Sometimes your opponent will come out of the gates quickly, but you’re going to want to be pretty conservative if you can help it. Never run your haymakers (Spire Golem, Arrows) into a counterspell if you can help it. Probe is invaluable in this regard, and Dispel helps a ton.

Patience is a virtue and trumps are more important than tempo. Be like the tortoise. Go bigger and stronger and let them see why going faster isn’t the play in blue mirrors.

That basically sums up the most popular matchups you’ll encounter in Pauper. There are of course a good amount of other decks, but they’re mostly fringe and the principles from the matchups I cover carry over into other matchups. I guess that I’ve played against an unreasonable amount of Tortured Existence lately but this isn’t indicative of the actual metagame and your game plan literally consists of them not drawing Tortured Existence, so I don’t have a ton of insight for that one.

As always I’m more than happy to answer any questions. Next week I’ll be going over a pretty sweet Modern brew that I’ll be bringing to the Des Moines PTQ this weekend. Wish me luck and thanks for reading!

3 thoughts on “Sideboarding with MUC Delver”