Liliana of the Veil has been an extremely interesting card to watch. The emergence of Jund in Legacy really flipped the switch on this card, turning it into a $50 ‘walker. Just this week foils began to spike out of control.

Many have attributed the price increase to the large influx of new players. But today I want to walk through Liliana’s price history to see if we can draw any other conclusions, and form a strategy for the card.

Let’s start at the beginning. Here’s what I wrote about Liliana in my Innistrad set review:

“In my limited testing, Liliana has been insane. She comes and edicts a player, then sticks around to accumulate value as you make them discard things they care about while you pitch something like a Vengeful Pharaoh. She probably won’t be staying at $35, but I see her staying pretty relevant as we move forward and price increases are possible. I’m interested in picking up as many of these as possible for reasonable prices.”

After the release, the price increase I talked about came to pass as players realized Solar Flare was the best-positioned deck heading into States, and Liliana rose to $60 or $70 for a couple weeks.

People began asking if we had the next Jace, the Mind Sculptor on our hands, which I addressed in an article detailing why Liliana wasn't as good as Jace.

While I was right at the time, and for the most part still am, it seems like things have changed since then. Liliana did in fact settle back down to $20 or so, and hung around there for a while. But the emergence of Jund in Modern kept the price high and the recent transition to Legacy has caused the run on Liliana. It’s gone from a pretty consistent $20-25 to $50 all of a sudden, with foils fetching $150. 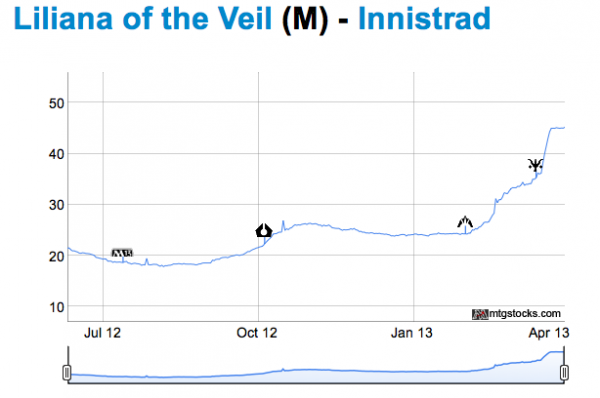 The first question, of course, is can it maintain that price?

Sculpting Minds Beneath the Veil

At this point, the most relevant comparison is obviously the Mind Sculptor, who has seen a pretty substantial rise himself in the last few months. The reason this is such a good comparison is because, like Jace, Liliana’s appeal comes primarily from Eternal formats. She is played in Standard some, but not enough to justify the big jump.

Looking at Jace, we see it’s at $100 or so, where it’s been for the last few months after a big jump from $60. The most important thing to note from Jace's price is how steady it has been since it went up again. $60 Jaces turned into $100 Jaces pretty quickly, but unlike a ton of other flash-in-the-pan risers, it has since held steady as a c-note.

That’s good news for Liliana. While the card may settle down some from its current price tag, we have yet to see a mythic since Big Jace sustain more than $50 while in Standard. That said, I can’t think offhand of any others with the Eternal appeal of Liliana, so it some aspects we’re looking at a new standard-bearer here.

A lot of MTG finance is about using good heuristics, which means an established precedent from which to draw future conclusions. That’s why finding the right comparison is so important, and that’s why Big Jace is so important here.

With that in mind, it’s easy to call a “ceiling” of sorts for Liliana. It can’t go higher than Jace because even if demand were equal (which I don't think is the case), supply for Liliana is much greater. So if Liliana continues to rise, you can feel comfortable in the knowledge that there’s not much farther it can go.

So what’s our play on Liliana right now, at $50? To be honest, I’m not interested in acquiring at that price because it seems to have leveled off the last week, suggesting that for the time being the rise is over.

With that said, I do think it is a safe hold. While the upside may not be huge compared to the entry point right now, I don’t think the downside, especially over the long-term, is too much. It’s likely we’ll see a bit of a drop-off come rotation, but since we’ve already establish Standard isn’t the main driver here I’m not sure how much of an effect that will have.

What about long-term? The risk of a reprint at this point doesn’t seem too high and it’s not eligible for inclusion in Modern Masters, so we can eliminate that. So there are really three questions to ask to determine a long-term plan.

We’ve already answered the second on that list, and Eternal demand doesn’t seem to be moving either. The last question is probably the most relevant one, and while I think the impact won’t be huge, I do think it will exist.

That means you may be able to get in on cheaper Lilianas in a few months, but not so much cheaper that if you want your playset now you should wait. I think the current price tag is reasonable if you need them to play.

Once we see that rotation dip, whatever it is, it becomes time to buy unless we have new information about questions 1 or 2. Assuming everything else stays constant, we’ll have the low point of the card’s lifetime and can expect incremental gains from then on out, making an attractive target to both pick up and hold onto.

Of course, this is just my opinion of the card’s future. What do you guys think? Is my analysis useful; or overly aggressive or conservative? I know I’ll be acting on my own advice here, so I’m interested to see if anyone else has a different take!

13 thoughts on “Insider: Beneath the Veil”