As everyone knows, MTGO doesn’t obey the same policies as paper Magic. For example, there is no reserved list online, meaning that Wizards can “reprint” (virtually of course) any set, at any time they deem necessary, and as often as they like. Such reprints can take the form of cube events, special drafts, or simply awarded as alternate art promo cards, for those who manage to accumulate 15 QPs in a MOCS season.

Thus, there are implications to holding cards over a long period of time. Wizards could very well announce that the next cube event will award prizes from a set for which you were holding a bunch of rares or mythics. The first good news is they warn us in advance. The second good news is people are scared of reprints and get rid of their stocks en masse, usually leading to an over-correction on the reprinted cards’ prices.

When we hear about reprints, we are generally thinking about our targets' lost value. We then adjust mentally to new, lower floor and celling prices. Perhaps it's time to reconsider the way we deal with reprints. What if we could see reprints as an opportunity to acquire additional stocks of staples, at a significant discount?

My goal is to convince you that after a reprint, the additional supplies are not permanently deflating your targets' prices. Over time, the extra cards are absorbed into the market, and the price increase goes on after a short period of stabilization. To me, this means that when the reprinted card has lost 25-40% of its original value, it becomes the perfect opportunity to buy the card at a discount, almost risk-free.

Modern Masters is likely to create a great deal of depreciation over the next few weeks for the staples that will be reprinted. We must therefore try to anticipate where we should stand during this period of uncertainty, and decide which moves will be most profitable.

First, if you haven’t done so already, please read this article shared by WeQu on the forums last week.

It explains how Modern Masters will be a test, rather than a real attempt at closing the gap between availability of Modern staples and increasing demand for them. There might be a price decline due to fear of losing value, but it is almost 100% sure that the prices of rares and mythics will keep on progressing shortly after, since the projections for new stock will not be able to cover the increased demand of Modern staples.

First of all, it's crucial to keep in mind that Modern will also see increased popularity online over the next few months and years. Additional supplies will be absorbed over time, as new players dive into this exciting format.

Second, we have already seen a good example of a panic sell in Tarmogoyf during the days that followed its spoiling. What we can see is that many online players got rid of their copies in a matter of days, completely out of fear, since we still had a full six months ahead of us before a single copy of MM's Tarmogoyf would hit the online economy. Regardless of buying at the perfect floor price (some could be bought at 38 a piece), stocking on these back then would have led to lots of money. 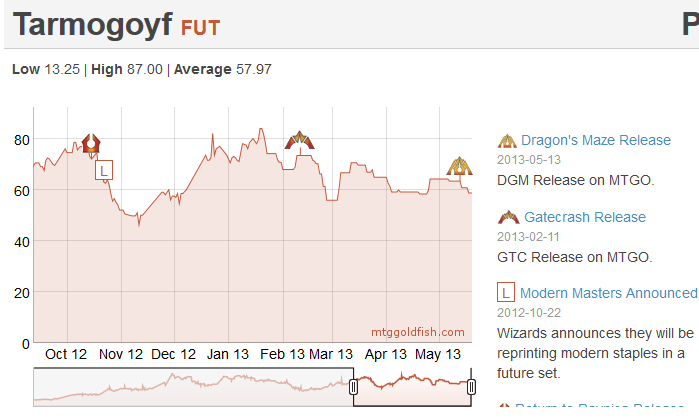 Last February, ZZW draft was available for a week. It is hard to estimate how many play sets of each fetchland were released during that week, and equally difficult to know how many players decided to panic-sell their own copies in response to the reprint. Matt Lewis proposed an estimate of 400 play sets of each fetch. If we assume that some players sold their lands at a discount, we can expect anywhere from 400 to 800 play sets were available to grab over the following days.

Now, one must determine if the newly available quantities were sufficient to create a flood that will permanently exceed demand for the cards. The formula for cube and draft events seems to have prevented such floods, and the newly emitted cards merely stabilize the price on the short- to mid-term, before seeing a steady progression afterwards. Let’s have a look at the Zendikar index for fetchlands, to see what the pattern looks like. 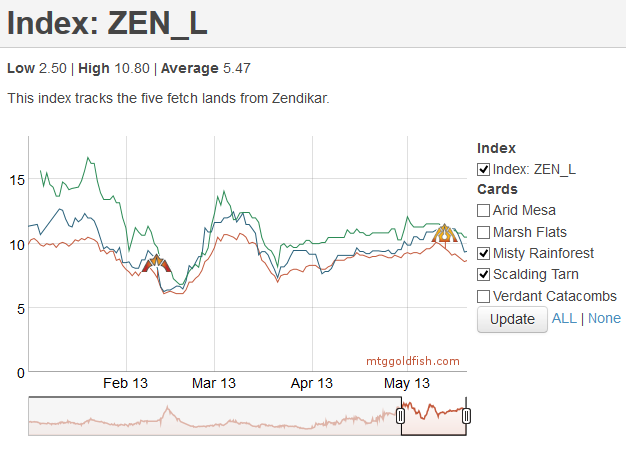 The red line is the index for all five fetchlands. The green and blue lines are for Scalding Tarn and Misty Rainforest, respectively.

As you can see, fetchlands have fully recovered from the ZZW queues. As of now, the fetchlands are a special case we'll have to watch closely. They are incredibly popular in the Modern format. They seem to have been redeemed in fairly large quantities too. They will also be a good refuge over the next few weeks, during MM's spoiler season.

Their current price shows how resilient they are, even out-of-season. So resilient in fact, we must now debate whether we are witnessing a new price floor, instead of a price ceiling. My prediction is that if you can acquire Misty Rainforest and Scalding Tarn for 7 to 8 tix each, you will be spot on with the new price floor, which is much higher than what we were used to.

The Case of Force of Will

Let’s have a look now at another kind of reprint that occurred this year, this time in the form of a promo Force of Will that was awarded as a MOCS prize. 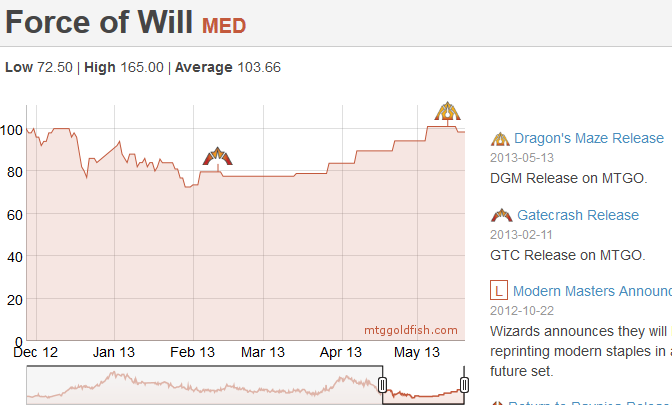 The deflation here shares similarities with the fetchlands. The price for the regular version went down 25%, before fully recovering, back to its usual $100 level. The promo version could be had for $50, and even less. It has caught up with the regular version, now sitting above $88 on mtgotraders.

We can presume that fewer copies of the promo Force of Will were awarded, compared to the fetchlands. Lately, there are indications that Legacy is gaining momentum online, so the increased supply is also met with increased demand. The chart proves that the injected stock did not exceed demand. So far, we can see that MTGO staff has been pretty skilled at balancing supply and demand when reprinting cards.

We talked about another kind of reprint last week. When we think of Gideon Jura, Jace Beleren, Garruk, Primal Hunter, Jace, Memory Adept, or even Chandra, we might assume their reprint in a core set doubles the number of available copies on the market. Well, this is flat out wrong, for many reasons.

First of all, redemption destroys a good portion of the virtual stock of each of those cards. Secondly, I have come across many casual players who end up reducing their time spent on MTGO or quitting the platform entirely, condemning their collection and reducing the number of available copies of any given card. Some of them log in so infrequently that their valuable mythics are rarely available for trade, so we cannot consider these copies readily available.

When demand increases significantly for a card, the majority of the online crowd is not necessarily aware of it, nor willing to sell. This also affects the number of available copies.

Another factor one has to consider is the fact that a vendor on eBay or on TCGPlayer can post his entire collection and fix a price at which he consents to sell a card. On MTGO, this isn’t true. Players must be online to make their collection available, and they have limited space to post their ads. There are thousands of players at any given time of the day who cannot offer their cards for sale. That’s why so many players must turn towards bots, who are online 24/7.

My point here is that when a mythic gets reprinted in a core set on MTGO, we believe that its availability has doubled (or that it will double), and we usually see a huge price drop. But in reality, when the metagame shifts and a reprinted planeswalker is now urgently needed, only a small portion of the total copies is available, for the reasons mentioned above. This creates pressure on the market, mostly on bots, who adjust their prices accordingly, eventually reaching the pre-reprint levels.

In other words, the next time you see a reprint of a popular mythic, such as Primeval Titan, watch its price plummet from panic sellers, and tell yourself that this is precisely the discount you needed to restock on that specific card. Make yourself ready for its next big spike.

Some bot owners were getting excited on Twitter about the unique opportunity to restock on Force of Will during the ME-to-ME4 drafts. They wanted to make sure to offer the best possible price in order to acquire as many copies of this staple as possible. More recently, some traders have remarked on a strange pattern with Thoughtseize, for which the price actually increased during the first days of LLW drafting.

Bot owners have increased their levels of aggressiveness when acquiring reprinted staples. Panic sellers and drafters turn to them to sell their cards at a decent price, and bots restock plenty. Therefore, the discount is getting narrower of late, and reprinted cards are better retaining their value. Afterwards, when panic sellers realize their cards haven't lost that much value and that they still need them to play their decks, they must return to the best stocked bots to buy their copies back.

If I had very deep pockets, I know for sure I would use a similar strategy, thus buying reprinted staples at a small discount, grabbing as many as I can, and then wait for prices to get back to their regular levels, to sell for a nice profit.

How to Prepare for Modern Masters?

This is still a tough question to answer without being wrong. I would personally grab spoiled rares and mythics, in their original version, when they lose anywhere between 25% to 40% of their actual value. I am convinced their prices will recover by the next Modern season, with the help of Theros prerelease events, which will halt (or slow down) MM drafts. The additional supplies provided by MM drafts will help stabilize the price progression of many Modern staples, but it is highly unlikely that these fresh supplies will permanently affect the MTGO economy.

Dark Confidant has been confirmed to appear in MM, as a mythic. This is going to be the perfect test for my approach with reprints. I will wait for this card to see a price decrease of 25%, hopefully 40%, and then try to load a big bunch of them. Then I will hold all the way until next Modern's season, and sell back for a good profit.

In two weeks, I'll share with you my crazy adventure in the world of running a bot (actually two bots). It's one of the most serious challenges I've faced since we decided to invest on MTGO. It's easy to lose sight of which cards we have bought and which ones we want to sell. It is also extremely difficult to stay liquid these days, when the bot keeps buying cards, even if they were bought at foolish discounts. So, stay tuned!

5 thoughts on “Insider: Fear of Reprints and Aggressive Buying Strategies”