I’ll just leave this up here before going any further. 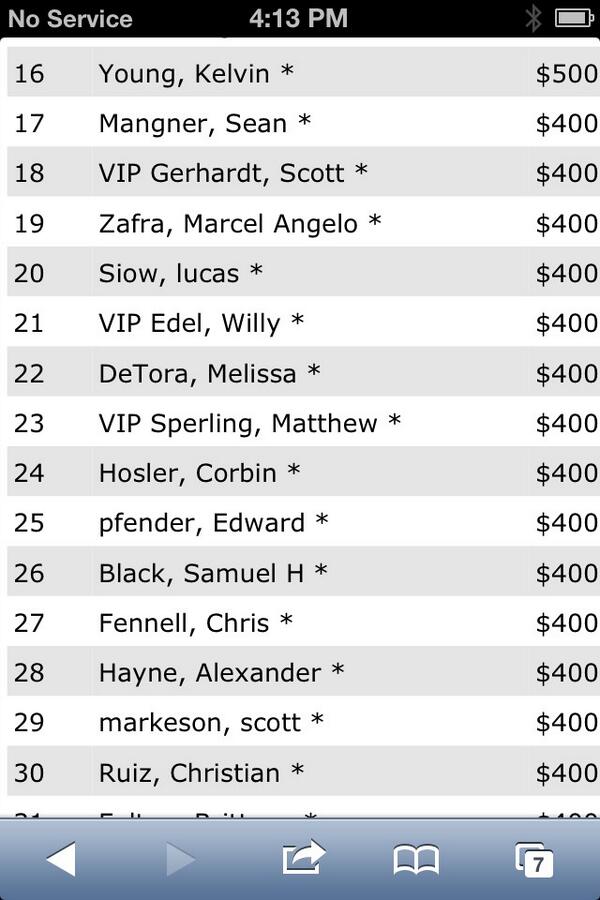 Not bad company to be in.

In other words, blah blah blah.

I assume everyone reading this knows the basics of the tournament. What you may not know is how things transpired on the floor. Now, while I didn’t spend as much time as usual trading (due to playing all day both days), I still got some trades in and have some news from the floor.

I find that first-hand experience at stuff like this is way better than trying to predict why things happened from afar, so the plan today is to share the impressions I got from the dealers and traders I talked to this weekend.

First, let’s talk about the player cap. Some people speculated this was due a lack of product, but my sources at Cascade Games (the TO) assured me that was not the case. Instead, they simply ran out of judges. Only Level 2 or higher judges are supposed to be on the main event floor at GPs, and they tapped every available judge for Vegas and simply ran out.

Also, because the event was so large and became such a milestone event, Wizards stepped in heavily to help run the tournament, which cut down on a lot of the issues that may have otherwise cropped up. I know there are certainly some complaints about how things went, but Magic players are always complaining about something. Overall, the event ran very well considering the extraordinary circumstances.

Obviously we aren’t the only ones who knew that Vegas would unleash a bunch of Modern product onto the marketplace. Dealers came to Sin City knowing the same, and they came with a plan. Namely, to not let any of that product make it out of town unless they left with it.

The impending price bump on Dark Confidant and Goyf was made obvious by certain dealers buying the room out of everyone’s favorite rare draft at $100 or above.

The price jump is here to stay, and I’ll admit it came a little sooner than I expected. I knew dealers would be buying well this weekend, but I didn’t expect the price increases to come so quickly as well. We’re still many months away from Modern season!

While I don’t see a ton of upside to Bob or Goyf after this weekend, I think their mythic buddy Vendilion Clique has some room to run. The price on this hasn’t bumped like the other two even though it rounds out the triumvirate of hyper-expensive Modern/Legacy staples. The $40 you can pay for these now could easily be $55-60 in a few weeks, and almost assuredly will climb between now and Modern season.

Sure, in terms of percentages there’s not a ton of upside here, but in real dollars it’s a very good target, especially if you’re able to scoop them out of trade binders at home.

Cryptic Command is another one I don’t mind targeting. The original printing has dropped $5 or so since Modern Masters but I expect all versions to be $30 or higher come Modern season.

The casual rares, and the commons and uncommons, are a different story. I saw dealers paying as little as 10 cents on what was previously up to $1.50 on Lava Spike. I think with things like that and Lightning Helix (and even Path to Exile) you’re best off just holding them. I expect Helix and Path to rebound a bit come Modern season, but for the previously good picks at common like Lava Spike and Etherium Sculptor (or Mind Funeral at uncommon), I think you just put them into the long-term box and forget about them for a while. They’ll rebound eventually, so I don’t see the point of cashing out now, but it will be on a much longer time scale than the higher rarities.

And seeing how little prices have fallen, I officially like keeping sealed boxes long-term. The ability to nearly double up on MSRP right now had me unsure, but it’s not going to be easy for Wizards to find another way to reprint these staples. Wizards stated they didn’t want to crash card prices and instead only wanted to move them by degrees, and they succeeded in that. I just don’t think many people expected that be a few degrees higher.

I’ve got two unopened boxes of Modern Masters left, and these aren’t going anywhere. With Kiki-Jiki, Goyf, Bob and Clique all showing upward trends and many of the rares likely to do so as well, I see no reason why these boxes wouldn't climb over the next few years--especially considering how fun the limited format is, another fact made incredibly obvious in Vegas.

Looking at cards not the in the set, the spike on Chord of Calling feels like a buyout move to me, and I don’t expect $20+ to be real come Modern season, though I think $15 likely will be.

Modern Masters wasn’t the only thing hot in Vegas, though it certainly gets most of the coverage.

Let’s start with the big ones–-the Eldrazi. Kozilek and Ulamog were both the subject of big pushes by dealers this weekend, and that seems right to me as these are steadily rising. I’m certain they’ll be targets for the next Modern Masters set, if not sooner, but for the meantime they’ll only continue to rise. While it’s been a steady and gradual climb for the past few months, the rate at which dealers were moving on these means I wouldn't be surprised to see them all suddenly spike to $50 either. These were getting bought at 80-90% of current retail this weekend by a few dealers, which is an unheard-of rate, if that tells you anything.

I also jammed some EDH at the Brainstorm Brewery house this weekend, and learned that the Primordial cycle is, in fact, insane. Previously I was just targeting Sylvan Primordial, but after watching them in action this weekend (and then more action from reanimation effects), I’m actually just grabbing every single one I see. No way these don’t become the Parallel Lives of the Block. As Jason pointed out last weekend, just get them all now before the community decides which one should be the most expensive.

As the coverage team put it, “the Podcast House” was the focus of the weekend. The members of Brainstorm Brewery rented out a house, along with Heavy Meta and several awesome listeners (and some QS insiders). We had a ton of people come through to visit us.

The house was insane, and a lot of good times were had, even if I had to spend a little more time on-site. I want to say it was great to see and meet everyone I did, and I wish I had the entire weekend just to hang out with all the awesome people I met either at the house or on-site.

If I didn’t get a chance to meet/say hi/hang out with everyone, I’m sorry! I did the best I could while playing 15 rounds of Magic, but I enjoyed all the time I did get to see everyone. Let’s run it back at GenCon 🙂

10 thoughts on “Insider: Tales from the Floor — GP Vegas”