Throughout this weekend, Magic players were bombarded with news regarding future products. Most, if not all, of this news came from two primary sources: San Diego Comic Con and PAX Australia. At each panel, Wizards revealed a ton of new spoilers and artwork for upcoming sets From the Vault: Twenty, Theros, and Commander 2013.

Overall, these panels were a billion times sweeter than the panel at PAX East, where some pictures of guild leaders were shown and that’s about it. I have to commend Wizards for turning things around this time. They leaked the perfect amount of information in my opinion. Not so much as to become distracting but not so little that it leaves people wanting for more.

Of course, all these images and spoilers generated a ton of buzz on Twitter in the Magic community. My goal will be to capture some of the headlines and discuss potential financial implications.

SDCC Before the Panel

I would be remiss if I didn’t mention one of the hottest MTG products ever created–-the ultra-rare (and apparently under-printed) black-on-black foil planeswalker set.

At the very beginning of the weekend, I began seeing discussion on how cool this set was and how expensive it may become. I did a couple quick checks and found the set selling for $250. Having no desire to spend this kind of money on five mediocre planeswalkers, I decided to pass. Then the news hit us via QS Insider Blast–-these were sold out for good.

My dreams were crushed. I was truly planning on buying a set at MSRP from Hasbro’s site. Obviously I didn’t think ahead. Fortunately I decided to put emotions aside and pull the trigger on one of the last copies available under $300. Overnight the price skyrocketed. 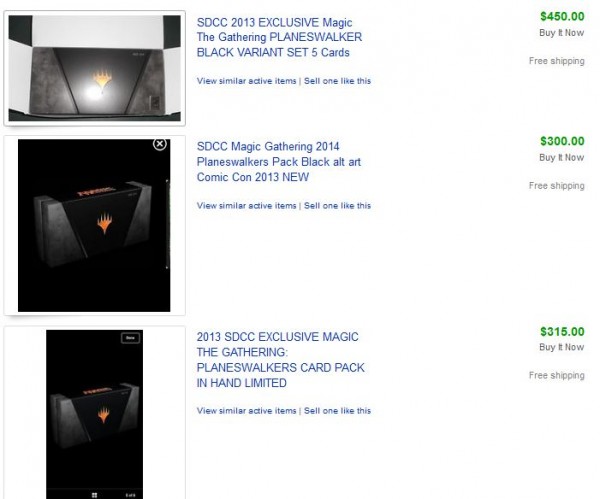 Holy cow this is a lot for five Standard cards! Of course that's an understatement–-these five cards are unique, exceptionally rare, and in high demand.

No further analysis is really needed here. These are going to stay expensive as long as more sets aren’t printed. I can’t blame you for skipping this investment based on cost, but I can virtually guarantee that if you bought a set at $250 you will have an opportunity to profit.

From the Vault: Twenty

Clearly the headline here is the new artwork for Impulse, right? I mean, that old woman looks like she knows what she’s doing, and Impulse is such a powerful Legacy card.

I can see this card dropping in value because of the reprint and–-oh, wait a second... You don’t care about Impulse, do you? Of course you don’t. You care about this reprint: 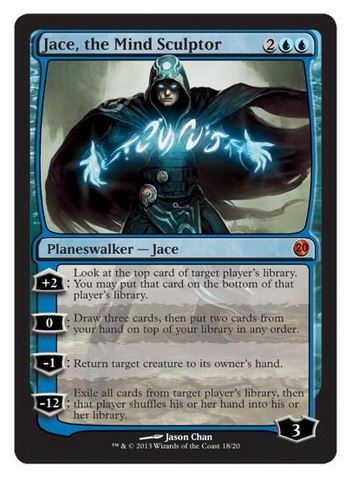 That’s right, Jace, the Mind Sculptor is finally seeing a reprint. This seemed fairly inevitable, really. The card had been appreciating in price significantly ever since it bottomed out post-Standard rotation. Jace is an iconic piece now, representing powerful blue mage-ness. Perhaps that’s why he retails for $150, with NM foil copies retailing at $800!

There’s much debate out there around how this reprint impacts Jace’s future price trajectory. Will the price decrease due to higher supply? Will his price increase, much like how Modern Masters impacted Tarmogoyf?

I can’t give you a definitive answer, of course. But I can speculate like the rest of us…hopefully with a little bit of data as support. For instance, I did a quick search on mtg.gg for buy prices on Jace 2.0, and it shows SCG buying at $80. 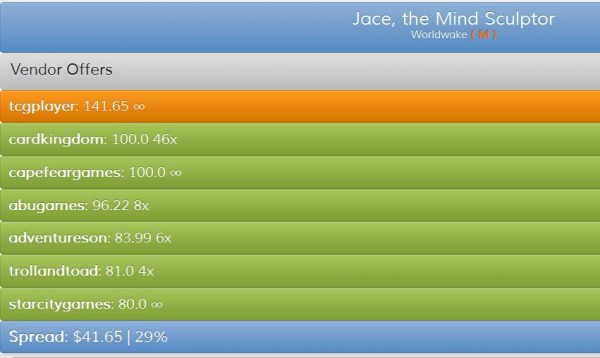 But then I navigated to the actual SCG buylist page, and this is what I see: 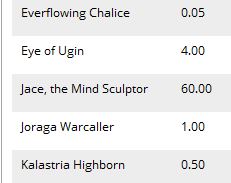 The discrepancy indicates that SCG dropped their buy price by $20 recently–-as in, probably right after the card was spoiled in FTV: 20. Their sale price of course hasn’t been reduced yet–-that will take a while. But the fact that SCG is buying far less aggressively indicates they anticipate a price drop of some sort. I’m inclined to agree.

As for foils, it’s not as easy to predict future price movement. Set foils always seem to sell for higher prices than promotional foils unless alternate artwork is used. I’d suspect a pullback of sorts, but I won’t try to estimate what percentage drop we can expect. It will depend on the availability of FTV: 20 in general. All I can say is this set is going to sell no where close to MSRP. Expect these to sell for at least double what previous FTV sets have sold for in the past.

Between the SDCC set and FTV: 20, people are going to be spending a boatload of cash on Magic cards.

A load of new information is available for Theros block. Something about gods, heroes, and beasts. Oh, and also there are these weird Vanguard-like cards that can impact a game from the start. I don’t know if these are only for Prerelease / Release events, but they seem pretty neat. One day they may even have value depending on quantities and success. 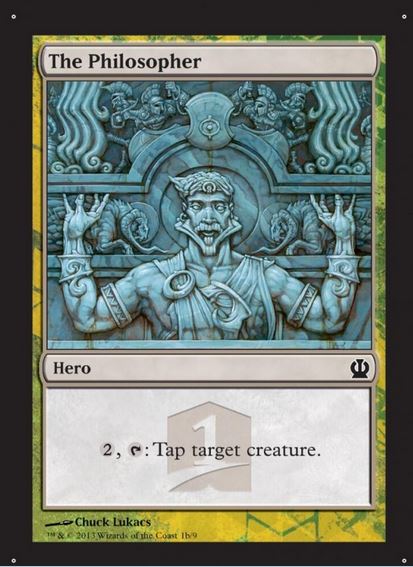 But what I really want to focus on this week is the news that Theros will have a significant enchantment theme, one that apparently goes beyond “enchantments matter”. Enchantments will feature prominently in the set, contributing to the feel of an environment about Greek gods and heroes.

What this exactly means is fairly unclear. But we can perhaps begin speculating on other enchantment-related cards (assuming we have any cash left after buying fancy planeswalkers and FTV: 20). A QS Insider Blast was sent out on this topic, and there’s already been a ton of discussion on the forms and on Twitter. By looking at each format individually, I’ll summarize some of my favorite ideas.

As the Insider Blast indicated, my favorite choice overall is Serra's Sanctum. The card has an obvious connection to enchantments, it is fringe Legacy playable, it is powerful in any enchantment-heavy EDH deck playing white, and it just got better thanks to the changes in the legend rule.

All these arguments combined with the fact that Gaea's Cradle is upwards of $100 and I am readily convinced this card has dramatic upside and limited downside.

Sure, this does nothing for Standard players. But the minimal risk (seriously, this card isn’t really going down ever and it’s on the Reserved List) and significant upside makes this card a no-brainer investment. I cannot guarantee you’ll be able to sell these for twice what you paid in a week. This isn’t that kind of spec. Instead, consider this one of those investments with low risk, high reward prospects–-my favorite type!

Want a Standard idea? Once again, Twitter came through.

I really like Ryan’s idea here. It involves greater risk, but the price on Mana Bloom is already so low that downside is limited. We lose Farseek with Standard rotating, and if we want to cast all sorts of gods and beasts and heroes in Theros, we’re going to need some ramp spells. What better fit than an enchantment ramp spell? I snap-bought two sets on eBay after seeing this Tweet and I would recommend getting these as throw-ins whenever possible.

One last idea with focus on Modern and EDH players alike–-Idyllic Tutor.

Honestly, I wish this was an instant. Still, if amazing enchantments are going to be printed then this tutor will certainly become stronger. Although it’s not on the Reserved List, I also see limited downside on this card. It has been creeping up over the past year and this trend was likely to continue regardless of Theros. An enchantment-heavy block is just icing on the cake for this speculative play.

Ok, so you’ve purchased an SDCC Planeswalker set at $250, a FTV: 20 set at $200, and a set each of Serra's Sanctum and Idyllic Tutor, right? Perhaps not-–-this is becoming an expensive hobby to invest in! I recently transferred some of my MTG funds into a brokerage account for some “RL Investing”. Now I find myself wanting for additional funds for all these investment opportunities.

If you find yourself in a similar place, strapped for cash, I’d suggest a focused strategy on the investment you like best. If you are all in on planeswalkers, then there’s no need to also buy ten FTV: 20 sets. Try and think about what investment will give you the largest return with lowest risk and prioritize accordingly.

That’s the best advice I can offer at this time, and that’s why I purchased one planeswalker set and then a few copies of Serra's Sanctum, all the while sitting on all my booster boxes and shocklands. Diversification, return maximization, and risk minimization is how I approach this hobby so I make investment decisions accordingly.