Every morning I conduct the same MTG research – I check my Twitter feed, I review the Daily MTG page on The Mother Ship site and I often scan my watched eBay auctions to identify which cards are selling and which aren’t.

But no morning would be complete without reviewing the top Interests on mtgstocks.com. This daily update has become a cornerstone of my research because it enables me to keep my finger on the pulse of the MTG market constantly. While a few outliers can skew numbers, often times the insights I gain from reviewing this site are of great value.

But “value” is a fairly generic term. Sometimes the most useful information from mtgstocks.com is not the next hot buy. Instead, general insights into metagames, casual interests, and how the market is ridiculous can all surface from the data on this website. How we react to the data and utilize it is how we extract this “value”. Allow me to explain further.

Where is the value from Sunday morning’s feed?

I often skip over the From the Vault cards since their supply is generally lower and so their prices tend to move more readily. Additionally, the price increases on smaller cards like Mana Echoes and Propaganda aren’t very interesting.

But inevitably there is something worth reviewing. This time I have taken note of two important tidbits here which I can gain “value” from.

First, I notice that Burgeoning has continued its slow, steady rise in price. Over the course of the past year this Green Enchantment has gone from $5 to $9 TCG Mid, an 80% increase in price. While this is a steep increase, the rise has been gradual in nature. This indicates to me the possibility that this price increase will stick – more on that later.

The second mtgstocks.com Interest I took note of this morning was Chord of Calling.

What I like about this data point is the fact that the price continues to rise despite already jumping in price significantly. So many times we watch a card jump in price drastically only to see it retreat in the subsequent week. A recent example of this would be Dream Halls, which after doubling has dropped 14.8%, 20%, and 6.7% in three consecutive days. Despite the sudden spike in Chord of Calling’s price, I feel the sustained subsequent price rise indicates to me this higher price may stick.

The Factors That Matter

Why is this so important? Why do I like Chord of Calling’s new price but not Dream Halls? I’ll try to explain a bit further what I look for in a price chart and what card characteristics I consider when determining if a price spike may stick or not.

So often a card’s price will spike due to a coordinated buyout. A player or dealer decides he or she wants to manipulate the market, so they go online and purchase as many copies of a single card as possible. This happened recently with Living Plane.

Being a rare from an older set and on the Reserved List, it certainly qualifies as one of those potential “buyout targets”. Someone noticed this and decided to make the spike happen – the card’s price tripled overnight.

Upon seeing this jump I had to make a quick decision. Do I scrounge MTG shops all over the net to find copies at the older price or do I let this one go? (Since I owned zero copies I didn’t have to debate selling, but I’ll touch on this later). To answer these questions I first consider the formats this card is relevant to and also its playability. In the case of Living Plane, I deemed this card relevant in zero formats. Seriously, zero. Maybe someone can convince me this is playable in EDH but it’s just so pointless to use. The artwork is probably the best part of this card.

Since the card’s uselessness was so obvious to me, the decision to pass on this hype was an easy one. I neglected to buy any copies even at the old price – this turned out to be the right decision. The card has already retreated almost entirely. If I had pulled the trigger, I would not have received the copies in time to sell at the peak price, and fees would likely have eaten away at whatever profits I could possibly gain.

During GP Vegas major retailers were increasing their buy prices on Dark Confidant to $50. It became very clear that the increased supply from Modern Masters would not outweigh the increase in demand driven by a newfound interest in Modern. The result – a moderate price spike in cards like Dark Confidant and Tarmogoyf.

The same analysis this time yielded very different conclusions. Dark Confidant and Tarmogoyf are both very relevant in Legacy and Modern. Demand has seen a legitimate increase, driven by increased interest in Modern and increased aggressiveness from retailers to increase stock in anticipation of Modern season.

The conclusion: this card was a buy once the spike begun. I regretfully missed the opportunity on Bob despite watching him sell out on eBay all weekend. Instead I focused my resources on Tarmogoyf. This decision has also paid out, fortunately, so I have less regrets on missing Bob’s spike. It seems that an increase in demand from both retailers and players for very relevant Modern and Legacy cards is a very sustainable factor to increase a card’s price. This is also why I think Chord of Calling’s higher price will stick.

Sometimes a card’s price spikes and it’s not obvious how the trajectory will continue. These are where the tougher decisions need to be made. For example, consider the recent spike in Dream Halls.

The card was steadily rising – a very sustainable trend – over the past few months. Then suddenly the price spiked over 100%. Considering the factors I outlined previously, this card is somewhat relevant in Legacy. It’s shown no dominant performances but has seen a steady increase in play thanks to the printing of Enter the Infinite and Omniscience. But is this enough to merit a 100% price increase overnight?

I believe the answer is no. There were no major tournaments where Dream Halls occurred in significant numbers within the Top 8. The price jump seemed too artificial for my liking. And I’m not just saying this because I have 20-20 hindsight. When spikes like this happens, and you determine it’s largely artificial, the best thing to do is to list any copies you have for sale immediately. I’m talking the morning of the price spike and no later.

This is precisely what I did with my three copies of Dream Halls. I had picked these up a month or so ago after noticing this card’s increase in play. As I mentioned before, steady price growth can be very sustainable. But once the price spiked artificially overnight, I listed my copies on eBay with the lowest buy it now price. Within two hours, they sold for $14.99 each. Just a couple days later, the TCG Mid price has already dropped below this price. Selling into artificial hype is always good. Take your profits and move on – let someone else juggle the hot potato to try and make a little more profit.

It’s always exciting to see cards on the move every morning. But we need to keep emotions out of our decision making process when it comes to price spikes. If a card jumps overnight, it can be tempting to buy more copies online with plans to sell at even higher prices. The old mantra of “buy low, sell high” should remain at the forefront of your strategy. Don’t buy into a spike unless you truly feel the price rise is sustainable based on fundamentals.

In the case of Dark Confidant and Tarmogoyf, the price increases were 100% justifiable. Buying these out of necessity is perfectly fine (though I don’t know if buying today would net you much profit vs. the risk you’d have to take). In the case of Dream Halls, insufficient fundamental support for a card makes for a weak foundation. In these cases, don’t buy into the hype. Instead, sell spare copies you have immediately. Even waiting one day can mean less profit because the faster these cards spike, the faster they tend to drop. Selling into hype for significant profit is always right even if you don’t sell at the peak. If people had done that during the recent gold bubble, they may not be riding a terrifying roller coaster right now (chart from Yahoo! Finance)… 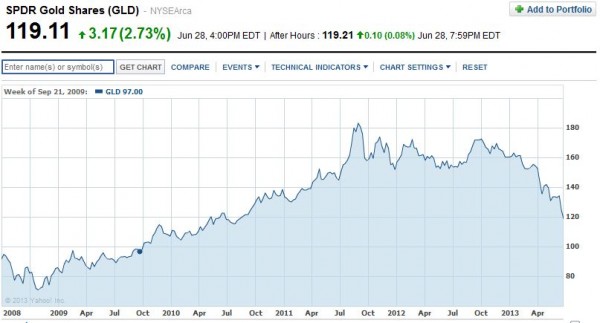 I love Star City Games’ feature where you can ask to receive email notification that a card is back in stock. It helps me stay on top of price increases and measure supply/demand of certain cards of interest. Here are some alerts I currently have set because SCG is sold out: