Old school shout out: He’s back.

Most of you probably do not know this, but one of my favorite creatures of all time typically gets a yearly update. One of the game's oldest creatures has become the template for new creature design over the past few years. This card, if looked at in comparison to the cards we have available today, seems underpowered, but remember, this card started it all.

Don't focus on the functional reprint that they downgraded to an uncommon, but rather on the inherent strength in the basic design.

Since I started playing, Savannah Lions has been one of the most fun creatures to cast.

Aggressive decks can be quite a challenge to pilot successfully. Not only is every card choice just as important as any other deck, but your game play decisions are as well. Attacking incorrectly for one turn, or sequencing your cards incorrectly can mean losing the game.

Certainly some hands will present you only one option, play this card or keep it in your hand, but that does not mean aggro decks are simple to play. One thing you have to keep in mind is how many resources to commit to the field, but being the aggro player is filled with nuance.

This year, being the aggro player is shaping up quite nicely. Look at where we started, but also at where we’re going. 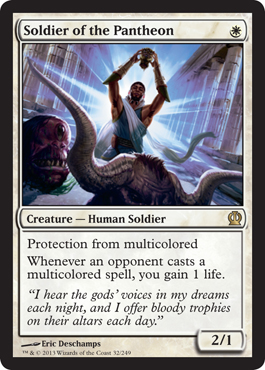 As you can see, this is not your run of the mill 2/1 for one mana. This creature is granted not one, but two abilities! The first one is an ability we have not seen on many cards so it may be hard to evaluate. There are only two cards to ever have this ability, Enemy of the Guildpact and Guildscorn Ward, and neither of them was even close to Constructed-playable.

There are only a couple creatures in the list that have actually seen play though. Cartel Aristocrat has seen the most play, but it is a sacrifice outlet and also being able to change which protection it gets is relevant.

The creature that illustrates my point the best is Blood Baron of Vizkopa. Baron so powerful because of his two protections. Having protection from both white and black gives him the ability to dodge much of the format's removal, as well as completely dominate any game against an opponent playing those colors.

When you are forced to fight against a creature with protection, it can often feel like you are in an unwinnable scenario. Wizards has carefully monitored which creatures they grant this ability to because printing it on the wrong creature could break formats.

What about my new Savannah Lions with protection from multicolored? Some things come to mind when I am trying to evaluate this ability on a powerful one-drop.

First of all, this protection limits the blockers your opponent can play. When your creature can’t be blocked by cards like Boros Reckoner, Loxodon Smiter, or the aforementioned Blood Baron of Vizkopa, you are taking away your opponents options. It is unlikely that their deck will have only multicolored creatures, but specific draws may.

If you have to go on the defensive, your one-drop can block their multicolored creatures endlessly, providing you time to draw out of the situation.

Finally, you will gain some life from your opponent playing their deck. I doubt the lifegain is going to drastically impact any games, but gaining a few extra life back can always help. Overall, Soldier of the Pantheon seems like a strong contender for any white based aggressive deck.

The fact that each god has their own epic weapon is dripping with flavor. Honestly it seems like Wizards' sole goal was to make this set the most flavorful of all time. Even if they had other goals, they certainly hit this one out of the park.

These legendary artifacts remind me of the titans. What I mean is that they all impact the board immediately but they also have a relevant ability later. Let’s look at Spear of Heliod for example. 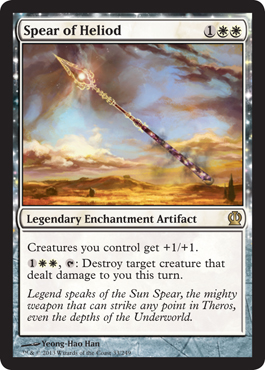 It’s been a while since we had Glorious Anthem in Standard. The last few years we have been playing with Honor of the Pure. Don’t get me wrong, Honor is great and all, but we can’t all be as good playing Mono White as Craig Wesco. Although, with devotion as a key mechanic of Theros, we are incentivized to play more mono-colored decks.

Glorious Anthem does something that I like my pump enchantment to do--get played at the right time. Sure you can still play your Honor on turn three, but if you can cast it for two mana, why wait until turn three? Sometimes, you want to cast two creatures and then follow up with your pump enchantment.

Glorious Anthem makes this line of play make sense. Turn one guy, turn two guy, turn three Glorious Anthem. This sequence of plays uses all of your mana each turn and provides consistency to your deck.

The thing is, we are just talking about Glorious Anthem. If that were the card in the set, I would still be happy and I would still play it. This weapon of the gods is better. Not only do you get your +1/+1 to your team, but you get a sweet ability to remove your opponents creatures. This card seems strong for competitive play. While I wish you could have more than one in play, just playing the first one is going to be enough the majority of the time.

The other gods' weapons look sweet too. The blue one lets you draw extra cards and clears the way for your creatures by forcing your opponent to attack. The red one gives all your creatures haste and turns your lands into creatures. The black one not only gives your creatures lifelink, but also casts Goryo's Vengeance for any creature each turn.

Finally, the green one just seems to do it all. One of my friends called it the new Umezawa's Jitte. I don’t think I’d go that far, but the plethora of abilities does make it flexible.

These enchantment artifacts are definitely powerful enough to be the weapons of the gods. Each of your creatures having deathtouch seems amazing because they will trade up to your opponent's creatures and then you get to choose from four sweet abilities when you activate it. I think they will impact the way we play Standard as well. 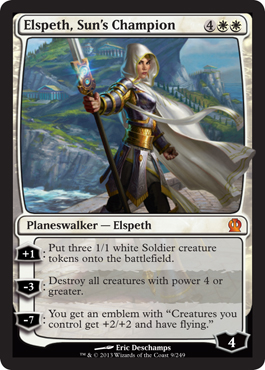 Making the three 1/1’s a +1 is about as strong as they come. A minus ability that casts one of my favorite Commander cards no one knows about, Retribution of the Meek, for free, seems amazing. The emblem is obviously strong and synergizes well with both other abilities.

My main question with this card will be how well it matches up with the metagame. If no one is playing creatures with power four or greater, her wrath ability would not be good at all. That scenario is not likely in my opinion though so I think she seems solid. This may well be the first six-mana planeswalker to see serious constructed play. I will also add, she seems exactly like a battlefield commander with all her abilities, which I think adds to the card. 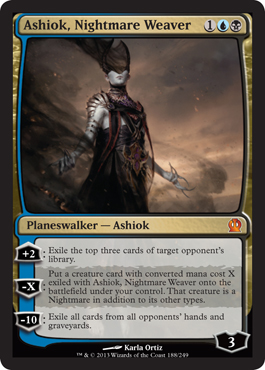 If Ashiok, Nightmare Weaver wasn’t made specifically for the control mirrors, I’d be very surprised. This card seems exactly like what a control deck wants from a planeswalker. Costing just three mana makes him quite good. If you want to steal their creatures to beat them with, you can do that also.

The unfortunate part about the card is the ultimate. Using the +2 each turn to build to the ultimate seems like it could have been a legitimate win condition for a grindy control deck, but it does not win you the game once you use it.

Even with a weak ultimate, the other two abilities are so good that I think this guy will see play, but maybe only in sideboards. 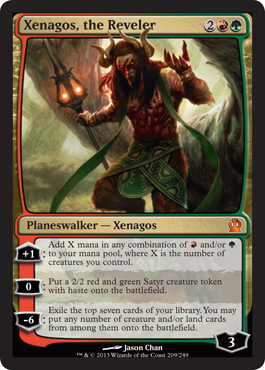 Xenagos, the Reveler is definitely my favorite planeswalker of the bunch. The abilities don’t seem to go together too well, but the more 2/2's you make, the more mana that will eventually turn into.

I hope there is a new ramp deck because this card seems like the missing puzzle piece to bring a ramp deck to tier-one status. It seems likely that you would be playing creatures to ramp into this planeswalker. What that means is you are likely untapping into seven mana, which is a great number to work with.

When I was thinking about a deck that included this new red-green planeswalker, I thought ramping into Borborygmos Enraged might be something to work towards, but that might not be good enough. The other way I see Xenagos being played is in an aggro deck. It may seem underwhelming to just make hasty 2/2’s, but if you have some type of Fireball effect in your deck, building your board presence with a bunch of creatures is just giving you more mana to burn them out.

I don’t know about you guys, but I am loving this set so far. It is shaping up to be not only a ton of fun to play but quite also impactful on Constructed. What are your thoughts on these cards? Post your input below and we’ll continue the Theros conversation.