Since the beginning of my journey through MTG finance, I’ve become familiar with certain truths.

Some are fairly constant. For example, trading down often merits small value gain. Or, real estate is a safe acquisition target.

Other truths seem to shift over time. A couple years ago, trading Legacy staples for Standard cards often yielded a significant premium. Now with the rise in popularity of Modern, this gap may be closing in some cases. I for one would not want to trade my foil Liliana of the Veil towards Force of Wills without a major premium because I perceive much more potential upside on the planeswalker.

There is one truth that’s not only everlasting, but can also be indicative of upcoming trends as well. This truth lies in the pricing of cards.

The Hierarchy of Card Prices

At times I am baffled at the range of prices I can find on a given card. For example, I can see Scavenging Oozes selling on eBay in the $12 range, while M14 copies retail around $19.99. This is nearly double the price! But often times there are valid reasons for the existence of these price discrepancies.

Retailers often command a significant premium on cards for sale. As much as we complain how expensive cards are from a major store, the fact of the matter is these stores have bills to pay. Employees require paychecks, buildings have rent and utilities, etc. To cover these bills, many retailers choose to price their cards a bit higher--for better or worse. By the same token, these retailers also have lower buy lists to facilitate the bill-paying.

Besides the major retailers, there are many up-and-coming finance pros looking to make a living on this hobby. These establishments may not have personnel to pay or a brick and mortar store to maintain, but they still are trying to put food on the table from their business. I liken these sellers to some of the more expensive TCG Player stores--below pricing of the major sites, but above eBay pricing.

Speaking of eBay, I often refer to eBay to identify pricing trends because that is where supply and demand truly meet. Most buyers on eBay will purchase the cheapest cards available in the right quantity and condition. Prices can be lower on eBay because many, many people use the site to sell their cards. Speculators, mom’s cleaning out their son’s closets, and everybody in between are selling Magic cards on eBay. Many times the sellers are happy to get any fair price near the market rate.

And thus we have a rule of thumb established to describe the pricing hierarchy. Major retailer > smaller retailer > auctions/personal sellers > buy list.

It may take time, but there usually is a system of checks and balances that keeps this hierarchy fairly consistent. The moment a retailer charges too little for a card, speculators buy that retailer out and force the price higher. Likewise if a buy list price is too low, a store runs out of stock and is forced to increase their buy price. Makes sense.

But the invention of internet, social media and instant connectivity has led to a rapidly evolving MTG finance market. News can flow to some people slower than others, which creates a discrepancy. It may take hours for the discrepancy to be found or it may take weeks. Either way, these discrepancies may be useful to predict short-term trends in the market.

Consider Scavenging Ooze as a case study. This card is pretty hot right now--it’s been the top searched card on mtg.gg for over a week and the trend isn’t slowing. The card appears in Kibler’s Gruul deck as a three-of and it has proceeded to increase in price on TCG Player.

The above chart indicates that the average seller on TCG Player is selling this card for about $17.50. Star City Games has the card listed for $19.99–-so far there are no inconsistencies. The interesting part is where this card is selling on eBay… 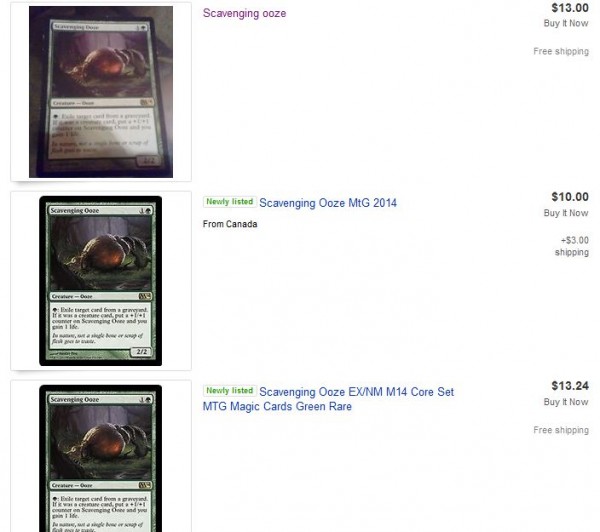 This is concerning to me as I am sitting on a number of copies of this card. Why is there such a large disconnect between retail ($20) and eBay ($13)? I expect a premium, but this is a large gap! What’s more, the price has been steadily dropping on eBay. It used to be difficult to find $14 copies and now there are listings showing up under $13 left and right. After fees, these prices are not far from the top buy price of $10.50, which also seems strange.

In my opinion, this pricing trend indicates a likely price decrease at retailers and on TCG Player alike. Buy prices are also prone to decreasing. The overall short-term trend does not bode well for the Scavenging Ooze investment. Luckily M14 won’t be opened much longer, and once Modern season rolls around these should pick up again.

Star City Games has a number of Return to Ravnica Temple Gardens listed at $11.99. This sounds inconsequential, except this price is actually lower than most sellers on TCG Player!

In this case the major retailers seem to be priced too low! What’s more, the card sells for nearly $11 on eBay–-this is baffling because I’d expect eBay prices to be significantly lower than retail. Instead, it’s only about 10% off! The most interesting tidbit of all is the fact this card buy-lists for $9.

In the case of Scavenging Ooze, retail was highest at $20 followed by TCG Player at $17.50, then eBay at $13 and finally buy list at $10.50. With Temple Garden we see a completely different trend. Retail is second highest, with $12 while TCG Player is averaging higher, at about $12.75. eBay is next highest at $11 and buy list is not far behind, at $9. These prices are much closer together, meaning not a lot of profit is being made right now on this card!

My prediction: not surprisingly, Temple Garden is due for a bump in retail prices, though buy list prices may not rise much in the short term. I expect these to sell on Star City Games in the $14.99 range come Standard rotation so that the price differences make sense again.

Last week I saw a valuable tweet. Unfortunately I was just a little late to the party:

Why am I so disappointed I missed the Ash Zealots on SCG’s website? While I do think the card has potential upside, I also acknowledge that the price hierarchy was completely out of whack! Star City Games was selling many copies of Ash Zealot for $0.99 even though the top buy price online was $1. Meanwhile TCG Player indicates an average price near $1.50, same as eBay.

The implication: the market for Ash Zealot is there, and at least one retailer is bullish on the card. Perhaps Star City Games had excess copies they wanted to unload cheaply. In any event, these cards are up to $1.49 on SCG now, which is still a little low. I wouldn’t be surprised to see it hit $1.99 come Standard rotation.

While the general price hierarchy is fairly robust on average, there are some cases where things get out of whack. This often implies a price change is on the horizon. But there are no guarantees. We still have to play detective to try and anticipate direction.

In the case of Scavenging Ooze, I expect the price to drop in the short term before rebounding long term. But perhaps retailers are trying to skip over the price drop period and focusing on long term–-they don’t want to get burnt by a sudden price spike caused by Standard rotation or Modern season. In the case of Ash Zealot, the card could end up a bust in the new Standard, driving price right back down again. The future is never definite.

All I can propose is that we use the general truths of MTG pricing to glean as much information about the future as possible. Price discrepancies cannot last long in the 21st century. As soon as there’s an opportunity, it becomes exploited. Therefore any time you notice something that seems priced out of place, it likely means there’s a change ahead. Retailers cannot charge less than buy list forever, but nor can retailers buy cards above retail forever.

When this happens, something’s gotta give. The trick is identifying who will cave first in this game of chicken. Developing a thesis to explain what may occur will help us make swift, informed decisions on how to react.

In the spirit of this week’s article, here are a couple other pricing disconnects I’ve observed lately. In each case I expect a price change–-I’m just not sure which direction! 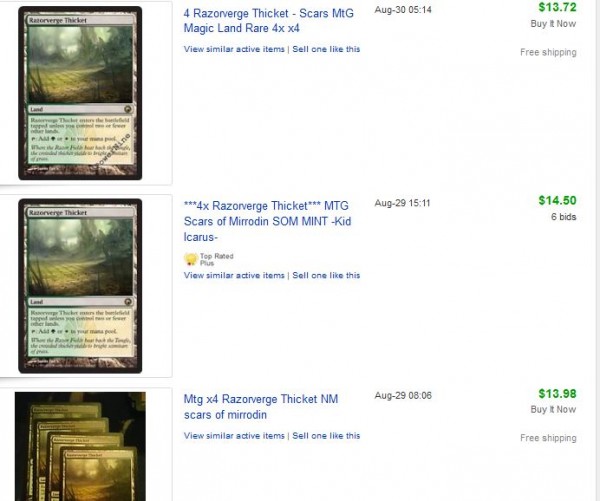