Fall Standard rotation is almost upon us, with Innistrad (ISD) block and M13 set to head out of Standard. In the meantime, some players are still playing with Bonfire of the Damned, Huntmaster of the Fells // Ravager of the Fells and Snapcaster Mage but really they are thinking about how they'll be turning on devotion or hoping to complete their play set of Thoughtseize.

For online speculators, it's the best time to have a few tix handy, so it's time to consider our standing positions, and whether or not it's a good idea to sell out for some tix.

One position that every speculator should have taken in the past six months is with shocklands. As pointed out by many writers and commentators in MTG finance, real estate has been a steady and rewarding vehicle for speculation in the past. Lands that produce more than one colour of mana make Magic more fun and are essential for the competitive player. This past winter, the consensus was that speculating on the Return to Ravnica (RTR) and Gatecrash (GTC) shocklands would be a no-brainer.

There was a brief bit of terror around the time when the land slot of Dragon's Maze (DGM) boosters was announced to be carrying the shocklands, but in general speculators have held a consensus that it would be a sound strategy to pick up shocklands. The message, loud and clear, was to accumulate shocklands, any and all of them, hold until the Fall and then to profit.

Recently more dissent from the majority opinion has cropped up. Jason Alt wrote about it in his article this week. Be sure to check out the comments as well; many of the best financial minds of the QS community chimed in with their thoughts. Forum user koen_knx also came out with a forum post this week saying they had recently completely sold out of their speculative shockland position.

These dissenting opinions should be taken seriously, but I disagree with their conclusions.

Let's investigate how the shocklands are performing overall. In the two charts below, we can see that the trend for both the GTC and RTR shockland indices is up since June. After finding a bottom of around 3 tix, both indices have started uptrends, with a series of higher highs and higher lows. This tracks the expected pattern of price correlating with supply from drafters. As Modern Masters was released, and then subsequently M14, this took interest away from RTR block draft. As supply from drafters fell, prices stabilized and then have been trending higher. 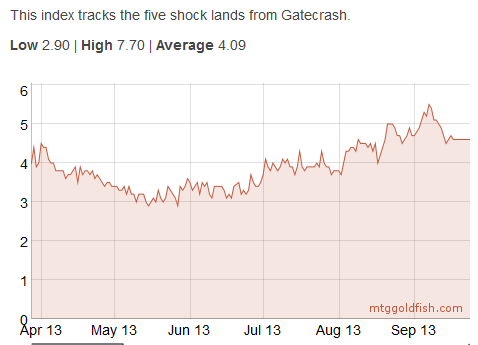 I'll draw your attention to the price peak in early September, followed by a substantial drop. I hypothesize that this was a round of late buying by some combination of speculators and players, followed by some speculators deciding to take profits. For my own portfolio at that time, I decided that it was worthwhile to sell some of the GTC shocklands, and I sold off a few play sets at attractive prices. 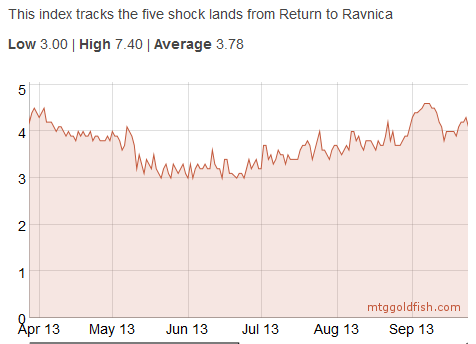 Lastly, it's important to recognize that some of the recent drop might be attributed to the throwback Ravnica-Guildpact-Dissension (RGD) draft queues which are associated with the latest round of Cube draft. Players might have reacted by panic-selling their shocklands due to the fear of a market flood.

My experience suggests that Cube drafts do not award enough product to encourage a lot of drafting. Usually to get a substantial amount of product into the market, you also need a high expected value from the associated draft queues.

In this case, the presence of Dark Confidant, Chord of Calling and four of the shocklands in Ravnica: City of Guilds suggests that that pack does offer some value to drafters. However, these are rares from the pre-mythic era, meaning they are harder to come by than rares today. For every Glimpse the Unthinkable there's a Warp World, Woodwraith Corrupter and Agrus Kos, Wojek Veteran, among others.

Notably though, the last two packs in the RGD draft, Guildpact and Dissension, do not have anything equivalent to the money cards in the original Ravnica. Each have an expected value less than half that of  Ravnica: City of Guilds. The combination of awarding phantom points for Cube draft and the low expected value on RGD drafts suggests to me that there will not be a lot of repeat drafting and that shocklands will not be flooding the market as a result of these events.

As of today, prices have not yet recovered to the recent peak earlier in the month. But, we are entering a period of renewed interest in Standard with the possibility of multiple shifts in the metagame. Standard of October is going to be substantially different from the Standard of December, and then there will be a further shake up of the format with the release of Born of the Gods at the beginning of February. On top of that, the Standard PTQ season might provide a slight premium to RTR block cards come January.

This gives a substantial five month window where anything is possible, where a hot deck can easily drive the prices up on singles for a few weeks. This is the type of interest that I will be attempting to sell into. Most of the shocklands will probably trundle along in the 3.5-4.5-ticket range for the coming months, but if one breaks out into the 6+ tix range, that would be an opportunity to sell.

However, in the short term, Fall Standard is not yet even upon us. Selling before rotation has even occurred goes against fundamental principles of speculating in the MTGO economy. In my experience, many players are short-sighted and have not been acquiring the cards they need to play Standard in the Fall. The urge to draft and the need for tix trump many future considerations for online players. Demand for shocklands has not yet peaked.

When players are impatient, it's up to the speculator to apply patience in order to maximize profits. If you've acquired a bunch of shocklands in the summer, you've got some more waiting to do. RTR, M14 and Theros Standard has plenty of time to run its course, and I'll be there to sell into the big spikes in demand.

Some of the early price increases will no doubt be met by speculators unloading their stock. The biggest gains will come after most speculators have sold down their shocklands, and supply becomes much scarcer. If prices haven't increased substantially on a given shockland by March, it will be time to consider selling the stragglers at market prices. The goal will be to make outsized profits on the hottest shocklands, and to make small profits on the rest.

Taking small profits on all of the shocklands right now is a strategy which will ensure a gain, but I feel confident that no shockland will breach it's price floor over the coming months, and that speculators will be better served by waiting for periods of high demand.