Today's article will focus on the Legacy-playables in the new Commander decks. Some are old favorites, but more importantly there are a few new ones that really stand out. So without further ado, let's get started. 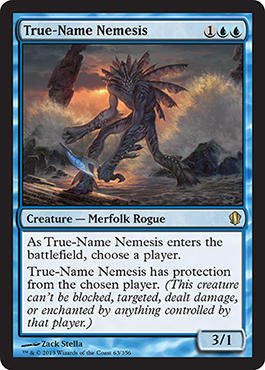 This is the one I am most excited about. It pitches to Force of Will, it's a merfolk for potential tribal synergies, and its ability is unlike anything we've seen before on a creature. We've seen similar cards (Runed Halo) that can give protection from a player's win condition, but never anything this all-encompassing.

This guy will give RUG decks fits as he is a great stall solution which kills Nimble Mongoose and blocks Tarmogoyf all day. RUG's only out is to counter him. It is also a solid Jace killer as it can't be bounced or blocked. I can honestly see this card bringing Merfolk back to tier-one status. 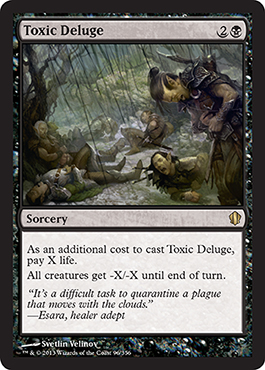 This card seems innocuous at first, until you realize that it gives black a non-conditional wrath effect at three mana (sorry Perish/Virtue's Ruin). While the life loss can be brutal, the fact that it gives -X/-X instead of destroy also allows it to kill indestructible or regenerating creatures (though Perish also kills w/o allowing regeneration).

I don't believe this card will be as big of a game changer as True-Name Nemesis, but I do like that it gives another weapon to black's arsenal and at three mana fits nicely on curve for most B/X midrange style decks. 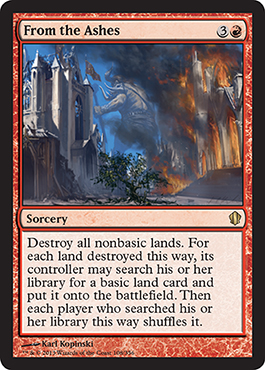 This is another card I can see a lot of people glossing over. We rarely get one-sided Armageddon effects (I can think of Flashfires and Boil) which like Perish and Virtue's Ruin are usually more restrictive.

The fact that Legacy is built on non-basic lands means that a red deck like Mono-Red Sneak Attack, Werewolves or Painter's Stone can now obliterate someone's mana base in yet another fashion (the current weapon of choice is Blood Moon and/or Magus of the Moon). Following a Trinisphere with this card will often earn a concession.

The searching for a basic land card might at first seem counter-productive to your "wreck their mana base" strategy, however, in all likelihood if you can blow up three-plus lands most opponents will get maybe one or two basics, whereas you could get all your mana back. 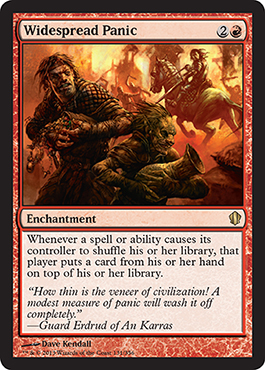 This is a card that also seems innocuous at first glance, but it's power level stems from the fact that so many Legacy players use shuffle effects to smooth their draws. The biggest downside is it costing three mana (which is a bit much for something that doesn't affect the board when it comes down). It could serve as a tool for red decks against the cantrip combo decks by reducing their hand size as they try to filter for combo pieces, which might prevent them from going off. 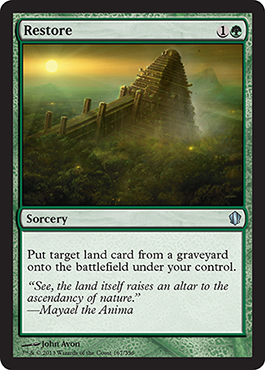 This one might be more of a stretch, but the ability to recur lands (which come in untapped) is quite useful. I like the idea of turn one Deathrite Shaman or Noble Hierarch, turn two Wasteland your dual, Restore Wasteland for your other dual. You could also use this in Elves as a way to rebuy Gaea's Cradles that you've legend-ruled away. This isn't likely a game changer, but it's a solid card with several useful interactions. 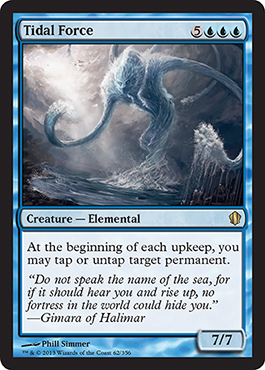 Yet another fatty that can help trump the Show and Tell matchup. While he isn't as backbreaking as Ashen Rider or Tidespout Tyrant, he does pitch to FoW and can lock down whatever your opponent cheated into play without requiring any other help (Tyrant requires at least another spell to cast). I don't expect him to see a ton of play, but keep him on your radar.

This guy is a known house in Legacy. He pitches to FoW, he cantrips, he blocks any creature and kills it; just a pure card advantage machine. This reprint has already dropped his price considerably. He was $20-25 a few weeks ago and is now down in the $14-$18 range, just due to this announcement.

His ability is unique (to be honest I never knew he existed) and powerful. The ability to recur creatures for no mana on a three-drop is powerful, especially if those creatures have some sort of ETB effect or sacrifice effect. He'd be even better if Swords to Plowshares wasn't the removal spell of choice in the format.

While more expensive than most cantrips, throwing the extra cards in the graveyard can be huge, especially if you're playing a graveyard-centric deck. I would have been excited to give this one a try in Reanimator (which has been gaining in popularity recently), except I believe Dimir Charm is just better on all counts. Both pitch to FoW, both let you dig and fill your graveyard, but Dimir Charm can also kill annoying creatures like Scavenging Ooze and Deathrite Shaman. Countering a Show and Tell is just gravy.

It's interesting to see how most of the generals have abilities that require you to hardcast them, which is likely a way for WoTC to print powerful creatures that are underwhelming when cheated into play. The fact that they seemed to push this concept hard does imply that Show and Tell should be safe from the next B&R announcement.

I expect these decks to be more heavily printed than the last run, as I expect the demand to be much higher. There's no justification for paying above MSRP though, as these will show up at Wal-Mart, Target, et.al.

My personal plan is to get one set of each for personal use and one set for investment. While I expect the print run to be higher, I believe the demand will match or exceed it anyway. The fact that WoTC threw in some high-dollar P3K cards will keep demand up.

It's also important to review the decklists and find the ones with the most value right off the bat. My personal opinion is that the most valuable are:

Thus, I will be stocking up on Mind Seize's if I see them at my local retailers.

I also am a big fan of the new land that pumps your general and provides mana fixing. I appreciate WoTC's efforts to print these powerful cards that are only good in EDH.