I think that having a strong urge to keep improving my knowledge, skills and abilities is a vital approach to ensure success. For instance I played Call of Duty 2 on the PC almost daily to practice with my team. On the weekends, I practiced from 11 AM till 2 AM which was a mix of strategizing, classic scrims, public servers, theorycrafting, networking and so on. This mindset resulted in my team being number #1 on the European ladders, playing for my national team and reaching the knockout stage of the EuroCup. Similarly this mindset has made me a better player with other games such as Magic, Poker, League of Legends and so on. I feel this mindset can be applied everywhere so today I want to discuss how we can apply the 'Art of improving' in Magic Finance.

On a Macro-level, research and development investments (time & capital) generate innovations that lead directly to increased productivity and to stronger economic growth. At the same time, innovators capture only a tiny fraction of the total financial returns from their innovations (Stratmann, 2005). Though there is empirically evidence that firms which apply persistent R&D perform better than firms with little to no R&D ( Johansson and Lööf, 2008).

But how does this affect us as speculators, individuals and entrepreneurs? I do feel we can continue researching and developing our operations in the Magic Finance world. Any small thing that can help us be more time- and cost-efficient is what I would call innovating oneself.  I want to set out some examples from my own experiences and clarify why I think these are solid examples.

Back in January, I wrote an article about a case study of Return to Ravnica ( Click here for the article ). Here I discussed the Prerelease prices in terms of the prices three months later. Additionally I discussed the evaluation of Deathrite Shaman.

What's important in the context of Re-analysing oneself is constantly where one can improve his/her way of thinking. In this case I only wrote about Short-Term Implications such as the Fall of Vraska the Unseen. I believe I failed to look at Long-Term expectation/holds of certain cards. So in order to compensate that let's have a look at the new prices now: 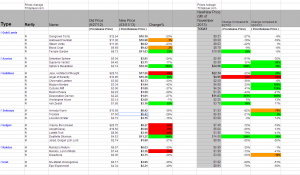 I want to highlight the new columns Prerelease Price & Post-Release Price compared to the prices of today. Let's use Sphinx's Revelation as an illustration. It was worth $3.74 because one compared the card to a Blue Sun's Zenith that gains one life (Luis-Scott Vargas, ChannelFireball) while others completely omitted the card (Craig Wescoe, TCGplayer) 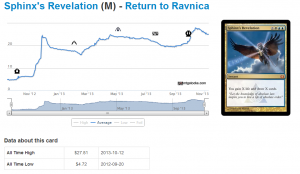 The point that I am making here is that after the initial rise of 392% ( From Prerelease Price to Post-Release $18.39 ), there is still an area of growth to be observed. Today a Sphinx's Revelation goes for $24.98 retail which is a 36% growth even if one entered at $18. I think this information is something I have missed because I was tunnel-visioned on the Short-Term analysis & outlook.

A smaller card that performed really well up till now is Ash Zealot, steadily growing by 17% to $3.7 from $3.16 or $1.95 initially. I want to keep this section concise as I want to dedicate a seperate article about this phenomena since I have missed opportunities during Return to Ravnica. A notable loss would be Niv-Mizzet, Dracogenius in my portfolio as I saw opportunity at $6.17 thinking it can hit $10+ but instead it plummeted down to $2.

What is important is that doing a performance review in how well you did during spoiler season is important to determine future action. For instance if you did really well in evaluating new cards in a new metagame (regardless if one spend any amount, one can do this for fun too by writing their thoughts down!) , one can allocate more capital to these periods of Opportunity.

If you are - like me - living in Europe, it is relatively hard to replicate what our US colleagues are doing. Despite having a stronger currency, using mass-purchases on American/Canadian websites just 'taxes' us too much regarding Shipping Cost and Risk% of Custom charges. At the same time selling in foreign currency eats us hard as well: 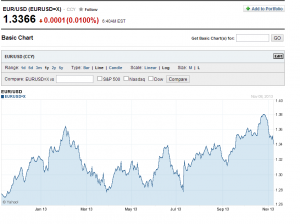 As of 9th of November the 'real' rate is 1€=$1.335 while PayPal sees it as 1€=1.294 which adds up a lot as well seeing the US eBay market is the biggest and has global reach for us. Another thing to keep in mind is being double taxed regarding currency as your own local bank might convert Euro to Dollar for you while PayPal reverts it back so you get even less.
On top of the real currency exchange; Paypal is charging 3.4% + 0.35 Euro ($0.47) for every transaction below the 2 500 € monthly sales.

So without going too deep, using eBay already costs us 15% of our profit margin while being aware the Euro is very strong compared to the US dollar. I only use eBay sparingly like selling Master of Waves during Pro Tour while the EU market has not moved that fast.

Instead one has to look at the opportunities. I use PucaTrade to 'exchange' certain cards that are very hard to move in Ireland and Eurozone. At the same time I put cards on my Want list that are underpriced on TCGplayer while having good demand and above average pricing in Europe. Besides MagicCardMarket there is no central EU Marketplace for us but there are plenty of Trading communities, Buylists and Groups that one can utilize.

However PucaTrade just revamped their website alongside with their Point System. Previoulsy 100 points is $1 worth of the Mid/Average index of TCGplayer. Well that is no more with the newer version, According to their Blog post their ''PucaValue Index is based on data from hundred different sources''.  Their one source was a Solid, Reliable index and now they make it much more shady because most opportunities are gone as one pays a flat premium for high volatile cards. For example Spellskite is $6 low, $8.06 average on TCGplayer while it is $9.54 on Puca. Another example would be Underworld Cerberus, I carelessly maintained it on my want list resulting in people sending the first wave of $2.92 (292 pts) but the 2nd wave it was $3.62 (362 pts) while the average price of TCGplayer index stayed unchanged during this period.

My advice would be to avoid using PucaTrade for Standard/Modern/High volatile cards unless they present (transparancy) how they do their calculations of the Index. The platform itself is fine for Legacy/EDH staples that have a stable price trend.

Ireland is a relatively small community where I operate in. Additionally I still trade on Dutch websites to move cards I cannot move appropriately here due lack of Demand or Lack of Supply (They just don't have the cards). I'm constantly exploring other communities to take participate in as it is one of the best ways for me to trade accordingly and sell the higher end cards.

The last thing I want to dicuss in this article is Centralizing one's collection. I use 5 different platforms to trade, sell, buy cards from and keeping everything up to date is becoming a real MMORPG grind. I used to do it separately on each site with its different HTML/BB coding but it is very inefficient.

Instead I have a Google Document without any formatting and found several websites that do the following jobs for me:

It is very annoying to skim through lists that are not in alphabetical order and I think most of my trading partners have the same thing. Therefore this is very handy in case your Trading Platform does not have this build in. I mostly sort on colour first and make every color list alphabetical.

Once again, a good first impression is a good way to attract new trading partners and I mostly feel repulsed when I see a page where his cards are not formatted appropriately as it takes more time to inspect his list.

Arbitrage is defined as a trade that profits by exploiting price differences of identical or similar financial instruments, on different markets or in different forms. (Investopedia)
To put simply what Arbitrage means: Restoration Angel (9th of November) has a 38% spread, buylisting at $3.10 (CardKingdom) while the Average price is $5 on TCGplayer. However in certain communities I am active on, the card buylists at €4 ($5.34) but I can trade it at 10€ as the Shop that runs the community sells it at that price.

Immediately one has to realize one does not make real profit (That is end up with cash as most liquid asset) but instead one can trade this card in for cards that are closer to market prices and obtain a higher buylist price overall. Understanding that these stores lack the motivation to lower their price is important as one can easily trade these cards for stable or new Standard cards.

I feel there is much more to talk, discuss and reflect on regarding our development as speculators in the Magic Finance Environment. I feel one can use the same strategies utilized in other industries. Also Trial & Error is an approach that can quickly determine what works and what doesn't at a relatively small risk compared to Global conglomerates.

I am looking forward to what gives you a significant edge compared to the masses. In other words: what do you do significantly better, more efficiently that you can consistently outperform the majority of the people active in the MTG finance world.

Thank you for reading & I am looking forward to your critique, suggestions and/or disagreements!

9 thoughts on “Insider: The R&D of a Magic Finance Player”