This upcoming week will see another holiday season (un)officially commence in the form of Thanksgiving--a major holiday in the United States based around giving thanks. The holiday stems from the early pilgrims who settled in the New World and shared food and experiences with the local natives.

Somehow, lost in translation, the season went through rapid commercialization and has morphed into what it is now. Millions of people will go out in the middle of the night Friday with the hopes of purchasing $99 Flat Screen TV’s and the like. To these people, I say “Good riddance. Knock yourself out, just don’t wake me up.” With the onset of Black Friday, the holiday shopping season will begin.

Why is this relevant to a MTG finance column? In recent years, American retailers have embraced this holiday tradition by offering stellar deals on Black Friday as well as Cyber Monday, the following Monday. These deals are often very tempting, rivaling even the cheapest of sites like eBay and TCG Player.

But every deal isn’t a steal. In some cases a deal is made to look tempting simply because the price is favorable from a retailer. Additionally, some prices are slashed deservedly due to a shift in metagame or some other factor.

This week I’ll share a few helpful tips when considering the holiday sales, and I’ll touch upon some of the cards I’ll be watching closely myself.

It’s easiest to highlight this lesson with an example. Let’s say a major retailer decides to offer one of the hottest Commander 2013 singles on the market at a discounted price on Black Friday. They may advertise “25% off all Commander 2013 singles!!” to draw your attention. So you check out the store’s listings and go directly to True-Name Nemesis. After all, that’s the most important card worth grabbing at such a great discount, right?

Sure enough, the store has precious few copies left in stock marked down from $49.99 to $37.49. This deep discount is alluring--such a comparison leads the human mind to feel they are being offered quite the steal. What’s more, the limited quantity in stock paints an even more urgent picture. Surely you must purchase them as soon as possible in order to capitalize on this rare discount.

Before snap-buying these deals I beg of you to cross-check prices. Minimally you should review TCG Player and/or eBay completed listings to make sure you’re getting a true bargain. In this example, the answer is a compelling “no”. Although mtgstocks.com lists True-Name Nemesis at $42, there are simply too many copies on TCG Player that cost less. 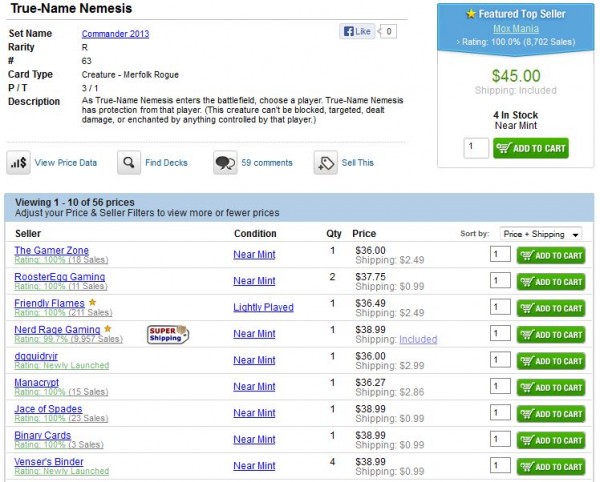 You may point out that all these cards are below the $37.49 price tag once shipping is factored in. This is true--but I’m not done yet. Check out some eBay prices next: 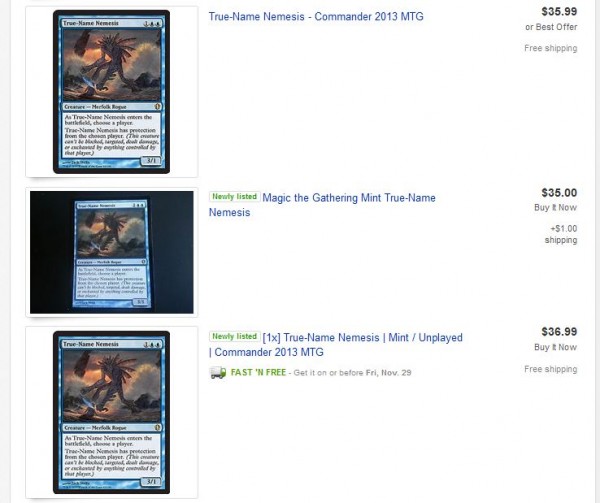 Now all of a sudden the retailer’s Black Friday special doesn’t seem so strong. Plus you’ll still have to pay that retailer shipping and you won’t get eBay Bucks out of the deal. Thus, this “discount” really isn’t as much of a deal as one would expect.

Watch out for this trend on many of the hottest singles. Cards in high demand also usually fetch a significant premium at retail--so much that even a 25%-30% discount doesn’t make the single a profitable buy.

If you need the cards and plan to buy a bunch of singles from that retailer anyway (or you’re using store credit), then the choice to buy has merit. But if you’re looking to buy out retailers on Black Friday deals with the intent to profit by selling on TCG Player, you must exercise caution.

Emotions tend to ride high during Black Friday and Cyber Monday sales. The prospect of grabbing a deal before peers makes the allure of shopping on these two days all the more tangible. I have some family members who live for these deals, and they are at Walmarts and Best Buys at 2 am with the rest.

Before you make any snap-buys, I urge you to consider all the valuable suggestions you’ve read previously on this site. Corbin wrote an excellent article last week on opportunity cost. This rule doesn’t go away here.

Just because you get a Chord of Calling on sale for $20 doesn’t mean you’ve made a wise investment. The price may be a full third cheaper than usual retail, but there would be no immediate profit available for you at that price and you’d have to sit on these cards for a while waiting for another possible spike in price. 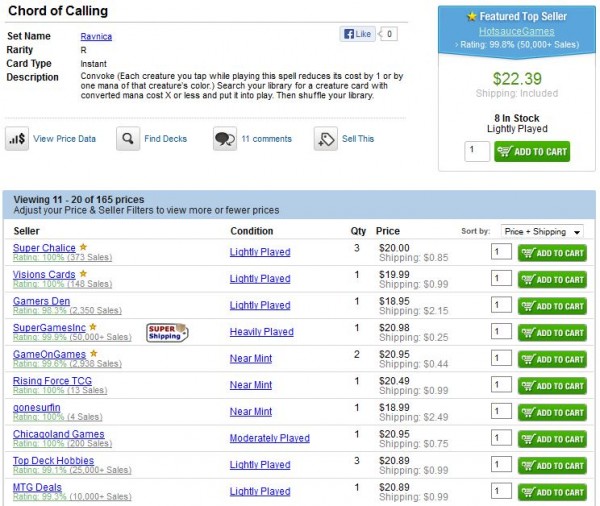 Another valuable tip to keep in mind is the exit strategy. Even during this crazy time of year, you should always have an exit strategy in mind when purchasing cards for profit.

Think through why the retailer is marking down prices so significantly. The holiday is a great excuse to mark prices down and clear out some slow-moving inventory. That doesn’t mean you’re getting the deal of a lifetime. It’s possible the dealer had some difficulty selling some of these discounted cards at their previously higher price--if so it’s unlikely you’ll be able to either.

There are two categories of cards I’m keeping my eyes out for during the holiday sale season: Modern and Theros temples. The former because we will see many more instances of Splinter Twin-like spikes in the next few months. I will be closely watching for deals on Spellskite, Birthing Pod, Scars fastlands, Worldwake manlands, and an array of other cards prone to spiking come Modern season.

The latter because of the same reasons I buy into every rare mana-fixing land cycle: prices will bottom soon and rise significantly next year. In fact, Temple of Mystery is already tempting me because I can acquire sets near $8.

The other temples are dropping in price as well. Just as I did with Innistrad duals, Scars of Mirrodin duals, and Worldwake manlands, I expect to make solid profit on these acquisitions once shocklands leave Standard.

The time horizon is a bit long, but my high confidence level combined with promise of solid returns makes me feel comfortable with this slow-moving spec. Hinterland Harbor’s curve says it all.

While I don’t necessarily see all temples breaking $10, I firmly believe at least one or two versions will hit this price tag. The others, while less desirable, will still appreciate significantly in price from their lows. At this point it’s about patience and timing--if I can find them at significant discount during the holiday season, this is one purchase I will be confident making.

Next weekend will be exciting as it always is. Finding those amazing deals and buying stores out of them before others can is an exhilarating experience that many of us MTG speculators live for. But we all need to keep our emotions in check--being the first person to buy out Star City Games of Show and Tell at a 25% discount isn’t really something to brag about. Cross-check first.

It may even be advisable to plan out what you’re willing to purchase should there be discounts from retail ahead of time. This is essentially what I’ve done, identifying the top cards I’m after heading into the holiday sale season. I can always look up additional opportunities before buying, but being prepared up front will provide me with additional agility. Hopefully this advanced planning will allow me to be quicker with browsing websites so I can find the right opportunities faster.

Finally, if we miss out on a steal it’s not the end of the world. Remember that these sales are designed to drive people to retailers’ sites, and many of the best deals disappear quickly. Even those who do capitalize by staying up all hours of the night may not be “winning” due to the time they spend searching through all these “bargains”. It’s all about that balance, after all.

Here are a couple other cards that would become favorably priced should they be marked down 25% from retail. These just might also land on my sale radar next weekend.