Yet another year is nearly complete and 2013 was a wild ride in the world of MTG finance.

We saw Modern shoot up in popularity even further, Standard rotate, and the rise and fall (for now) of shocklands. Commander is still a hit, driving prices up on random cards even further, pleasing casual players and collectors everywhere when they find out their Wheel of Fortunes are now nearly $20 cards.

In this article I’d like to take a step back and consider all the valuable lessons I’ve learned about MTG finance throughout the year. Here are the top five tidbits of data and facts I’ve internalized along the way, in no particular order…

Fortunately much money was made by our community in anticipation of Standard rotation in spite of these developments. The traditional strategy can still work--find cards powerful enough to be relevant in a smaller Standard format once rotation occurs and invest in those before the bump.

The star child for this year was probably Jace, Architect of Thought. This card made many of the QS community a good deal of profit (in addition to Supreme Verdict, Ash Zealot, etc.).

I’m definitely going to be cautions with Standard speculation in the future because I know supply is higher with newer sets. But there is definitely still value to be made in this space and I hope for a repeat performance next year.

Most of you already know about my significant investment in Innistrad Booster Boxes. I fully expect this strategy to pay out in the future, but the wait has been painful. Very painful.

Consider this: my boxes have done nothing but gather dust throughout the year. I’m getting no dividends and if anything these boxes have depreciated slightly as stores unload their boxes of this no-longer-Standard-legal product. Meanwhile I’ve watched the stock market hit record highs. 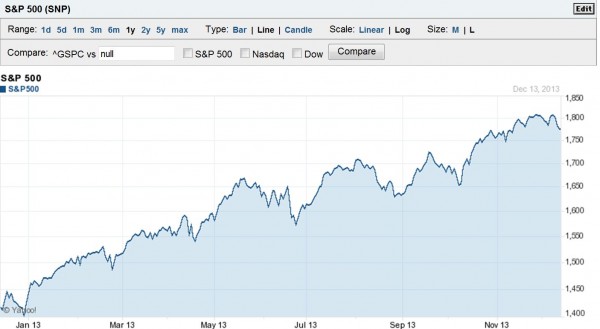 Yeah…probably should have just put the money into the market. Hindsight is 20/20, but it would be a travesty if I didn’t learn anything from this lesson.

Sealed product can be one of the safest investments in Magic and I stand by this, but the opportunity cost involved and physical space requirement are causing me to seriously rethink this strategy. And again, increased print runs to meet higher demand will also likely hurt the potential of these investments in the future.

In a way we could call 2013 the year of the reprint. With Modern Masters we have finally learned Wizards’ intent to keep Modern an affordable eternal format.

Except so far they’re not doing their job effectively. It seems their reprinting strategy is barely keeping pace with Modern’s growth. Consider the recent reprint of Tarmogoyf for example:

The price has actually settled a tiny bit, but we’re still much higher at the end of the year than we were at the beginning. Modern Masters has definitely driven higher the interest in this infant format, but it hasn’t necessarily generated enough copies for the community.

Even set reprints aren’t 100% effective. We saw Mutavault reprinted in M14 and the card is still worth nearly $30.

I do expect these to drop back down again once they rotate out of Standard. I don’t see them going below $20 though.

Barring a major reprint, such as the Scavenging Ooze promo or perhaps Theros’ Thoughtseize, I don’t anticipate small print run stuff will have nearly the effect Wizards wishes it would on the secondary market.

I wonder now: will Modern Masters 2 have a larger print run than the first? Will Tarmogoyf and Dark Confidant make reappearances? How will Zendikar fetchland reprints be handled? Many questions to be answered, hopefully in 2014.

Tip 4: Selling out of Legacy Left Me with Little Regret

The proceeds generated from my selling out of Legacy went right into an investment fund for my son’s college education. The market has been kind to me this year, generating returns that have easily beat most Legacy staples.

In fact, this time of year Legacy staples tend to drop in price. Tarmogoyf’s chart above reflects this, but even Underground Sea is not immune to this trend.

Will Legacy staples take another leg higher next summer? Time will tell, but I’ll continue to put my proceeds to good use in the stock market attempting to compete with Legacy’s growth (which I personally feel will stagnate soon enough).

My one regret: I do miss slinging some of the most powerful spells in the game. But I must be completely honest: playing Modern and knowing that if my opponent is tapped out he won’t be countering my spells is so very refreshing.

I fully embrace the Modern format and I’m not turning back…unless they ban something to hose Melira-Pod. Then I may just quit competitive Magic altogether.

Tip 5: Buylisting Is a Great Way to Cash Out

Trader Tools has introduced me to so many different buy lists and I’ve leveraged these a ton this year. Each retailer pays more on some cards than others, and it’s rewarding to take advantage of all the key players to make the most amount of cash possible.

Although buy lists are often below TCG Player pricing, the avoidance of significant fees and allure of not waiting for a buyer makes buylisting a popular practice. I intend to take advantage of Trader Tools 2 and all it has to offer in the year to come. And arbitrage can still happen and it still leads to easy money!

MTG finance is still evolving and growing, and it is my intent to continue to refine my strategies to keep up. As I learn more and find new ways of making money both in Magic and in “RL Investing” I will continue to relay this information to the community through the forums, my articles and Twitter.

If you have some additional tips you’ve acquired throughout 2013, please feel free to add them in the comments section below!

Hopefully you paid attention to my Nekusar Sigbits from last week. If you bought into Wheel of Fortune you are now sitting on some easy profits. My advice here: wait. Even if Nekusar doesn’t gain further in popularity, Wheel of Fortune is still a casual gem on the Reserved List. It’s going nowhere but up in the long term.

Here are some other Reserved List cards worth watching…