Note: By the time this article goes live my cast will mere hours from being removed! But alas I am writing this article Sunday morning, so the same unfortunate rule applies. My typing is much slower and so my article will be a bit shorter as I recover. Apologies for the inconvenience.

So this was an interesting week in MTG finance. 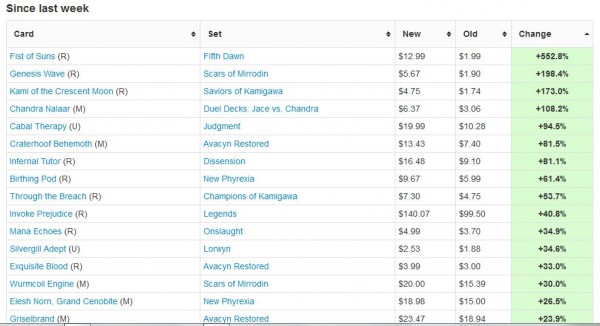 Duel Deck Chandra aside, there were thirteen cards last week that went up by at least 30%. Fist of Suns, of course, takes the prize home this week due to its fivefold gain after showing up in Prague fueling early Emrakuls.

MTG finance news is happening so quickly I am struggling to identify what topic I should focus on! But I started this article with specifics in mind so I'll run with it.

Last Modern season saw significant jumps in price for Zendikar fetchlands. Lorwyn filter lands also saw a nice price bump throughout the season, though these have retracted a bit due to lighter demand off-season. In fact these were already a bit costly even heading into last Modern season.

Last Modern season it was the popular Worldwake manland, Celestial Colonnade, which received the spike treatment.

This year Raging Ravine became the third manland to exceed $5 thanks to its popularity in Modern Jund.

Despite this surge in demand, last Modern season had seemingly no impact on Scars of Mirrodin dual land prices. In fact, many rares from this block were surprisingly cheap. Birthing Pod, Spellskite, Melira, Sylvok Outcast, and recent buyout target Genesis Wave.

To be fair, Spellskite did in fact jump in price. But after Modern season ended (and then was delayed), the card gave up about one-third of its earlier gains.

Now, almost five months before the next Modern season, these cards are on the move. Genesis Wave was “discovered” and immediately bought out. Spellskite has reached its former highs, with momentum still positive.

Looking at the top mtgstocks.com interests, a number of cards from Scars of Mirrodin block are finally on the move.

This week it was Genesis Wave, Birthing Pod, Wurmcoil Engine and Elesh Norn, Grand Cenobite. Despite not appearing on the top of this list, we have also seen Karn Liberated rally like crazy. Venser's Journal has rallied from its lows and received attention in the QS forums.

Even a few of the Scars fast lands are finally moving higher in price. It’s about time.

I bought into many of these fast lands over a year ago, anticipating a profitable opportunity during last year’s Modern season. It never happened. There were just too many in people’s binders. The set was too recent.

All that has finally changed. We are finally seeing spikes in prices from Scars block, and this trend will accelerate as we approach Modern season. Scars fast lands will finally have their day in the sun. I don’t expect them to hit $10, but $5-$8 feels very reasonable depending on the land. I am confident these will finally get the attention they deserve now that they are sparse enough.

Granted, they have a ways to go. They are a far cry from their Standard highs. But I believe the trend is finally positive, and popular Modern cards from Scars of Mirrodin block will have their share of price increases along with the rest.

As For Newer Cards…

Many newer Modern cards such as Abrupt Decay and the shocklands will of course become more in-demand as Modern season approaches. But I don’t expect the buyouts and price increases to be nearly as drastic this year. They are simply too new.

If history is any indication of the future, I would expect Innistrad block cards to become more attractive investments for next year’s Modern season. Aging that one additional year is critical. It appears a set should be at least three years old (i.e. a full year out of Standard) to be vulnerable to major price jumps.

As a corollary, Return to Ravnica block cards will have their day as well. But for those heavily invested in shocklands like me, we will likely have to wait two years for these investments to really pay off.

Mythic rares can spike much earlier, by the way. We are already seeing Griselbrand on the move due to its multi-format popularity. But when it comes to rares on the move and getting bought out, that three- to four-year time frame is absolutely critical. When we can trade Scars fast lands into shocklands in a year, this trend will be validated.

Of course, this is all assuming no reprints or counterfeit scandals driving significant price drops.

No, never mind. My focus is on MTG finance for mostly conservative investors. I am not here to stir the nest and forecast doom and gloom. Counterfeiting does bother me, as do all the crazy buyouts occurring thanks to Reddit. These are dangerous factors in the world of MTG investing.

For now my advice is to remain focused and always avoid getting swept up by hype. If you do insist on speculating and playing the quick flip game, only do so if you can buy cards near their original prices.

If you buy cards on the way up you risk getting burned by being unable to move them for profit once the hype passes. I pity those who paid more than $4 on their Genesis Waves recently--they are likely to lose money after fees and shipping.

Always remember the exit strategy and always estimate what price you plan to sell at before buying any copies of a hyped card. In the case of Genesis Wave I fully expected this card to drop back to $5 after spiking near $10 for about an hour.

(Corbin should not be surprised I am including this Tweet. I should print this out and throw it on my fridge. Okay, end of shameless bragging at Corbin's expense.)

With this estimate in mind, I decided it was safe to buy copies up to $3 but probably not much higher. In order to avoid getting burned by this pastime I would recommend adopting a similarly conservative approach.

Roughly speaking, the older the card, the rarer it is, the higher it will spike, and ultimately settle. As Scars of Mirrodin block ages further, expect many of our investments from last year to finally pay off this summer--just be prepared to sell into hype when it happens. The window to maximize profit is rapidly shrinking due to all this speculation!