Well, another week of crazy MTG speculation is in the books. Some of the interests from last week trumped those from the week before! 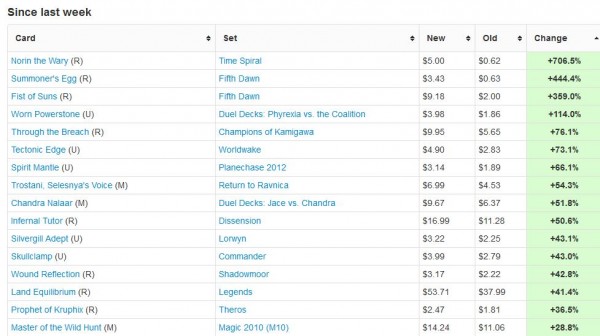 Seriously guys? Norin the Wary? I know all about the discussions in the forums and how this card has Modern potential. But I would encourage everyone to stop and think for a few minutes. How good does that deck have to be in order to truly make a splash in the Modern format? Now go back and read what this terrible creature actually does. I’ll wait.

Now before you write me off as a fool, I will confess that I bought a dozen copies of Norin at just over a buck each. Within three days of receiving the cards they were sold for a nearly 100% profit after fees and shipping. Did I sell at the peak? It would appear not. But the simplicity of selling into hype and avoiding the “race to the bottom” has so much value to me that I was glad to take my 100% and run.

This week I’ll talk through my approach when confronting any buyout--whether legitimate or not, the same strategy applies.

Following my strategy may not guarantee you maximum profits for a single situation, but it will maximize your chances of making money without getting burned. Because at the end of the day, no one wants to sit on 100 Norin the Wary they paid too much for.

News travels fast these days. To have a strong chance to make profit on a buyout, you really need to stay ahead of the curve. As it turns out, my new wear’s resolution to participate more actively in the QS Forums has helped me do just that.

The Insider community has grown significantly, resulting in a diverse group of interested parties seeking to identify the next big speculation targets. This community with a common cause does a terrific job bringing these targets to the foreground in the forums. I highly recommend you check the Single Card Discussion thread morning, noon, and night.

Of course, Twitter is an excellent resource as well. Following the right people is a surefire way to identify what cards are generating the most buzz. And then there’s Reddit.

Needless to say, there are ample resources available to ensure you are aware of the next targets before the masses, or at least at the same time as the masses.

Yet again the QS Insider forums is a valuable resource for evaluating the legitimacy of a buyout. The community quickly weighs in with their thoughts as the buyout is occurring. Whether it is something completely manipulative and silly like Didgeridoo or some new tech like Fist of Suns, the community is eager to share their opinions. Read these carefully and then formulate your own.

From here the next step is to find the cheapest copies online and compare prices against the pre-buyout price. If you’re getting in on the ground floor of a cheaper target, chances are you would be fairly safe to buy some copies. For example when Norin the Wary spiked, I bought a dozen from TCG Player as soon as I found out because they were only a buck each. Fairly low-risk as the card rapidly trended higher.

If on the other hand you are looking to participate in a mad dash for a hyped card as the target’s price doubles and triples, you may be too late. The later you enter the game, the less likely you’ll come out profitable. I completely missed the boat on Summoner's Egg simply because I was focusing my energies elsewhere.

But who cares if you miss a buyout or two? These occur on a weekly basis, so just wait for the next opportunity. Don’t get caught holding copies you paid too much for because you didn’t want the feeling of missing out. There will be another opportunity, I promise.

I wanted to make one more suggestion regarding the decision to buy into a spike. Multiple factors should be considered when determining how late in the buyout process is too late. These factors include card rarity, age, and utility.

If an older Modern card suddenly proves to be incredibly powerful in the right deck, the upside potential for such a buyout is much greater. On the other hand, if someone randomly speculates on a more recent card because one day it may be good in Commander, I greatly question the integrity of such a buy. And then of course there’s the incredibly stupid, like Cosmic Larva (for those of you who remember that scare). I think you get my point.

Bottom line: the decision to buy into a hyped card should be approached holistically, taking into consideration the right factors that determine the magnitude and duration of a spike.

To cite recent examples, I believe Norin the Wary was worth buying at $1 or below but not higher. The card was opened a bunch in Time Spiral and it isn’t proven in any significant capacity. While it is a bit older now, buying copies at $2 to try and sell for $5 on eBay feels like an approach destined for disappointing results.

On the flip side, Tectonic Edge’s spike feels much more stable. The card saw tons of play at the recent Modern GP, and it is essentially the Wasteland of Modern. While it’s only an uncommon, Worldwake was not drafted for long at all and the card’s legitimate playability suggests the recent price spike is here to stay.

As a result, it wasn’t a terrible idea to buy into this one even if you came a bit late to the party. The higher price is likely to hold.

Buying into a sudden spike is tricky, and the approach needs to be carefully calculated. My rule of thumb for selling is much simpler: always sell into the hype.

But…but…what if the card keeps going higher and higher???

Who cares? If you double up on a MTG investment, your return on investment (ROI) would be enviable to almost anyone. I especially love making 100% gains over the course of two or three days. Short of options, doing that in the stock market is very difficult and often requires significant risk.

What I am trying to say is, selling into the hype will guarantee you profit and make it much easier to do so. The risk of waiting too long and trying to race towards the bottom is too great to overlook.

From time to time, this strategy may leave you wishing you held. But once a card spikes, the upside on that card instantly becomes significantly lower. So low that it’s better to simply sell right away and use that money for the next buyout. And believe me, there will be another.

For example consider a buyout I actually believe in: Tectonic Edge. I firmly believe this card is worth $5. Yet the upside from here is greatly reduced versus the $1-$2 I paid on my dozen copies. I could hold onto these cards until Modern season, when I will possibly be able to sell these for $6-$8 (maybe 20% upside from here after fees) or I can sell now and use the money on the next Norin the Wary, which yielded me a 100% gain. Opportunity cost is a thing, trust me.

If you have resources to hold Tectonic Edges and participate in the next buyout, then I cannot fault you for the diversifying approach. But make sure you are consciously making the decision to put less resources into quick flips by holding onto the steady risers.

All About Risk Tolerance

In reality, it’s a combination of both quick flips and steady gainers that ensures a robust portfolio. I would be hypocritical to claim I focus all my resources on buyouts (though I probably do focus 90% of my effort on them).

As usual, my article is designed to make everyone aware of their own decisions, whether they be active or passive. Full awareness of our own strategies makes us more disciplined investors.

To close with a common saying, “luck favors the prepared”. Best of luck to everyone during this time of turmoil in MTG finance.

7 thoughts on “Insider: Strategizing the Buyout”