Born of the Gods spoilers are in full swing - and for now - the giant question on everyone's mind is "Which way do you go?". Beyond just a giant list of "Eh, this card looks good." I'd like to focus this week on looking at what the spoilers so far have really shown us. Also, in this weeks article, a little tid bit of information that has gone largely untalked about. For now, let's jump in to what Theros block has in store for us.

What we've seen so far: 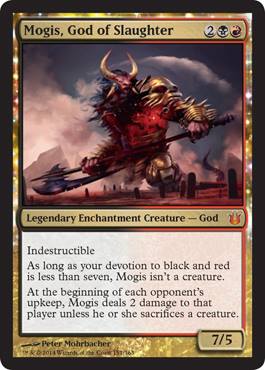 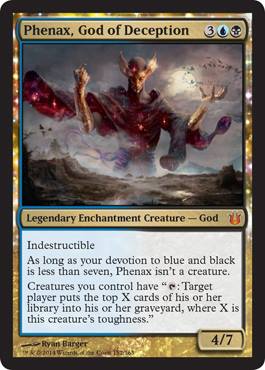 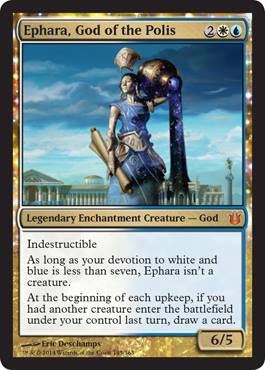 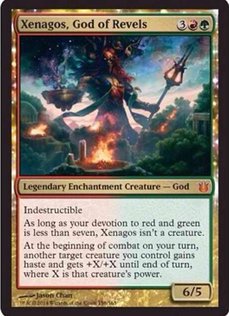 If you have any doubt, at all, about what impact these series of Mythics will have, let me put your mind at rest. At some point all 15 Gods will have an impact, financially speaking. All of them are showing there is a high level of playability, strategy, and implication in what's to come. The mere presence of one God in a deck means if there is no plan for it - the opponent is probably cold to it should it come online. This is just because of the indestructibility factor, on its own. As the information available is still incomplete, we see that all of the Gods are showing they have a relatively solid ability and a massive headache if they achieve POWERED UP! status.

How does this impact the financial side of them? Every player I've ran into is still undervaluing their impact in the short-term, long-term, and interim. This means their value is repressed as the mentality is they are not that strong. Not only are they one of a kind, but their individual effects are mass appealing to all aspects of players. As of now, they are not all impacting Standard. But as Wizards as mentioned, Theros block is very much the "Top Down" set design. This alone tells us that these are going to be the flagship of each set. Look for most of the answers that Wizards implements to rise in value in stride with the Gods as they see more play.

Once we have the full cycle, then I expect we will fully understand where they position themselves to be. By then, Modern will have fleshed out the first 10 along with Nykthos, and Commander players will still be giggling with joy every time they cast one. Just remember, these are the flagships of this entire block. Likely, they will be very similar to Karn in both how he progressed during the block, and post rotation. Mostly with an eye of suspicion and and "Oh, that's cute." More than likely it will take a year(+) to reach their full potential. Keep your eyes on these. A solid 150%-200% improvement is my current estimation. 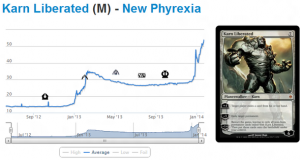 The format we are heading into, is strictly going to be a critical mass style. Heroic, Devotion, and Bestow reveal this. Obviously, Devotion decks have been making a large impact in Standard already. Some of that is beginning to trickle into Modern, effecting prices of some off the wall cards. Heroic is starting to be fully fleshed out with the release of Born of the Gods. The main point of emphasis here though is that removal is going to see a heavy lean on in a format like this. Specifically discard, exile effects, and counter spells. The main reason why is Bestow Is Here To Stay. 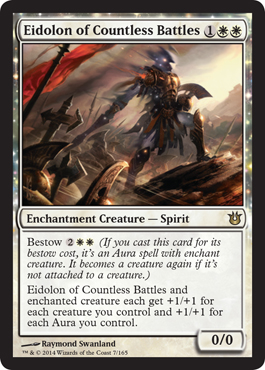 Bestow was first viewed as kind of cute. Obviously though, the storyline is pushing more and more Bestow creatures into the world of us mortals. How this is shaping up will effect the answers that are printed. It's apparent that the ones we have will not be enough to keep them in check. At this point, we have a couple of examples of cards that do this, but until this recent development, the prices have still been undervalued. Now it's apparent so much of Born of the Gods and Journey Into Nyx will have Enchantment Creatures and not just the World Enchantments most envisioned this "Enchantment-centric" block being about.

This means that cards that were once viewed as narrow answers should begin to pick up in steam. Theros itself pulled a little "Rope-a-Dope" on what was going to take place. But now with all the spoilers revealing the high percentage of universal enchantments, a card like Swan Song is looking more and more like a bonafide Counterspell reprint. Look for most cards in the rare/mythic slot to experience an up-tick in demand and thus a sharp uptick in price. 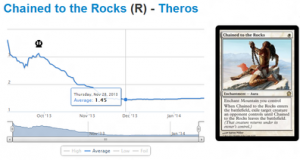 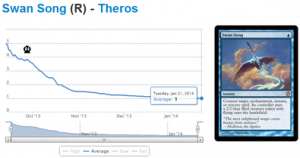 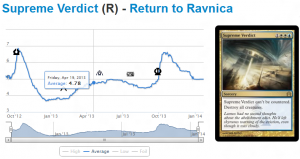 Something that hasn't really been getting much publicity this week, but surely will affect things is the seemingly innocuous rise in uncommons from 60 to 80 starting with Magic 2015. As this doesn't have nearly the impact on Theros block as it will in the future, the question lingers - "How will this impact uncommon prices?"

In my mind, this will lower some and increase others. The natural response to more, is less. The quality of each uncommon should see a decrease and while that happens, an increase in price for the uncommons in demand. Larger print runs of uncommons will obviously put a strain on early singles development and a premium on those that can have them in stock. Don't neglect this potential in the future, as most uncommons bulk prices are firmly set at $.05 or less across the board. Buyers are slow to adjust to change, so this could impact your portfolio as the full impact is realized on this subtle, but powerful change. I'm curious on your thoughts, so please leave thoughts in the comments, as I would love to hear your opinions on this.

Keep an Eye on the Horizon -

2 thoughts on “Insider: The Event Horizon”