"To Ban or Not to Ban! THAT IS THE QUESTION!"

I'm certain there were a number of "false starts" these last few days, with many not knowing when to expect Wizards Banned & Restricted list. Your standard Google-Fu did not turn up anything of relevance, and many people where pulling the trigger early for the sake of shouting "FIRST!!" at the next Speculators Anonymous meeting.  Even my fellow QS Writer Jason Alt spoke, at length, on the market reaching already without anything but shifting sand to stand on.

Let them reach. Let them panic. Their panic will be your gain in the long run. Their money will be tied up in cards that may or may not move. The market was already bearish on Bitterblossom as is at $25. What makes anyone think it would go full Bull at $35?  I could now launch into my best Wolf of Wall Street sales spiel and really get into hocking you the latest goods, cards, and ocean front investments - but that will do you no good. The time to take advantage of the B & R has already passed. If you haven't picked up on what I'm putting down - let me make sure one thing comes across:

Rules to Spec By

RULE #1 of Speculation:
"Acting when everyone else is acting means you've already lost."

That list of cards, broken or not, that defines what is truly Over Powered for any given format can be the LIFE or the DEATH of any investor. No sooner than you find that "AH-HA" moment on a format warping card.....UH OH!, it's out of stock....

RULE #2 of Speculation:
"Find the pulse, and never let go."

So, bannings are incoming. Since you are reading my article, I'll assume you want my opinion: Nothing is going to change. I REPEAT, NO CHANGES. People have talked ad nauseam on the possible reasons. So I'll let those reasons stand. It does all come down to this though: The formats are balanced. There are no run away decks that are "continuing to supress every other possible avenue of competition." Are there some clear winners & losers? Welcome back to remembering the fundamentals. Will there be some unbannings? Possibly. In the eyes of Wizards though, it's impossible to guess which they see as more fit than the rest.

RULE #3 of Speculation:
"Supply and Demand rule all. Supply rules Demand though."

Lest we forget there is always the option of no change. The passing of time, Theros, & Born of the Gods have brought on a reasonable expectation of progress - but as of yet - no one has sought it out. Modern is truly where all the impact of the B&R can be felt as the power level of Legacy is hard to break in upon.

So, first, what progression could we have seen that demands a banning in Legacy? Dark Depths? Too little information on how it's warped the format. Could it be banned in the future, possibly. It's still the new kind on the block, so to speak. 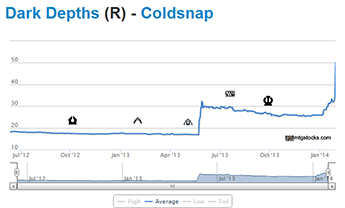 Standard? Good luck with that. Too balanced of a format for bannings. You have to have something extreme to shake that format. We haven't gotten that in the latest two sets.

Rule #4 of Speculation:
"In the absence of change, continue to focus on the fundamentals."

Top 5 Cards
You Should Be Paying Attention To: 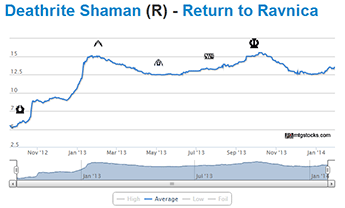 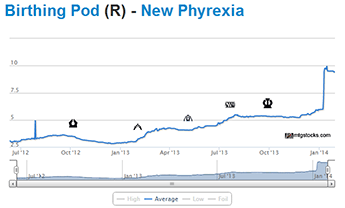 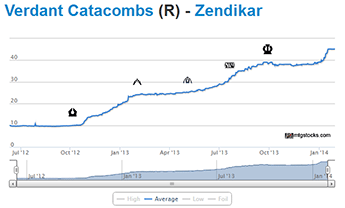 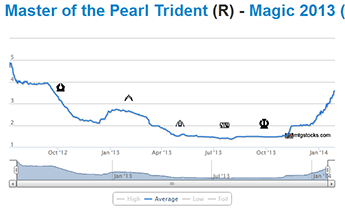 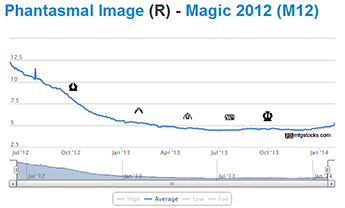 Rule #5 of Speculation:
"Better to be first to know, than last to act."

In the absence of change, we must stick to the things we know. Pay attention, watch trends, get in & out when the prices are correct, and most of all - always maintain cash flow. Regardless of what comes about, if you were in at the right time on any of the five cards mention there, you will be on the (+) of the equation. I'm sure much to fellow writer Corbin Hosler's delight, the last few weeks we have seen a rise in the popularity of Modern Merfolk. Key components that have not truly stabilized have been back on the move again. As the Modern PTQ season approaches, many first time format players are viewing Fish as the viable alternative to playing Robots while also maintaining the ability to delve into Legacy. Should this trend pick up more, all components of Fish should continue to be on your radar.

This is where I leave you for this week. What changes will the B&R bring in your mind? Your thoughts? Do you agree with no change? Leave comments with your thoughts and more on this article.

9 thoughts on “Insider: Walking Towards the Light”