Everyone knows, the key to winning at speculation is to get in at the right time then get out before it all goes bad. Or even Plaid. The character Barf in Mel Brooks' classic "Spaceballs" once uttered the phrase: "THEY'VE GONE TO PLAID!" Plaid is one of those signs things have really gone wrong.   No one really wants to wear plaid. Except, maybe this guy: 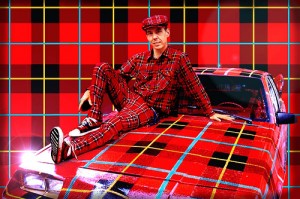 One of the many problems that strikes me is that the clear and evident "bad" times are becoming more and more confusing. I'm sorry. Let me rephrase: What people believe are "bad periods." There are none. If you've done your homework. If you've struck when the time was right. If you've managed to put the work in on the trade floor - EVEN IF you have 60+ copies of a card - eventually you will be able to find a buyer or exit strategy at profit. *Barring any foreseeable reprints from WotC (yes, they are all foreseeable).

The seasons are more "ebb and flow" instead of just "on & off" these days. This means you must be prepared with the correct plan. Today, I'm going to talk about what items to remember, when making that plan.

It doesn't matter how you do it. Typically it just matters when you do it. If you have the benefit of buy listing for a store, can pick up collections for less than retail, or are spec targeting on the trade floor - you need to get in when the card is the lowest. Recently, I had a stock of roughly 65 copies of Master of the Pearl Trident. Have you seen his price graph lately? Take a look:

Keep in mind, I primarily pick up cards on the trade floor. I do not have the luxury of a brick and mortar at this moment, and I don't deal very much with Craigslist. I also very rarely buy into a card via other vendors. Over the course of post rotation I was picking them up 3-8 copies per weekend, and slowly amassing them around the late October 2012 to June 2013 time period. I had done my homework, paid attention to the trends and figured at some point there would be a demand spike that I could ride for a net of $2-$4 per copy. The key was picking them up while everyone still thought it was trash, unusable, or wouldn't ever go higher than current expectations. (Remember blue Zendikar fetchs at $15? Ya, something like that scenario). The key was in knowing and/or recognizing what WotC was doing with that card. Knowing it's role player status and looking beyond it's current applications. Finally, when there was an uptick in demand - I grossed about 500% on 3/4th of the stock I had. I eventually limited the number available, for I still think the card has not reached it's cap yet.

The point: There was a time period I was wondering if I had made the wrong decision. I bought low, and was expecting everything to change much later on. As the price kept dropping, I wondered if I pulled in the initial copies too high. As long as they were readily available, and I kept my price consistent with the trends, I knew it would be ok. I will admit I started to see how many copies I had set aside and was wondering if I was just accumulating "box rot."  In other words, cards that would never do anything constructive. I was taking figurative dollars I could leverage, and allowing it just to sit. I knew my game plan though, and as long as more copies were being easily acquired, I had to trust in my assessment of the card. I will admit, around October 2013 I was wondering if I started if I would ever realize my gains.

2) Figure out what "the right price" is

A friend of mine is talking about getting a shirt for me that says: "I'm interested in anything at the right price." Honestly, truer words couldn't be spoken. I do a lot of homework to figure out what the right price is though. It's more than just simply looking at price charts, though. Multiple factors go into knowing where you should start or how you should determine that right price. Every market is different based on what each store is doing for said market. If there are too many stores not providing enough packs in prize support, I can promise you this will lead to a shortage of the appropriate targets you have selected.

This will force you to look online, or attend much larger events in order to increase your target card pool. This means more travel, or less play. If a card is doing particularly well in your area, but yet no one has it in stock - buying from an online retailer to flip for +/- 20% in trade all of a sudden looks like a great plan. Even if that price doesn't change, traders will become much more pliable and willing to talk if there are simply no copies to be find in your market. That's just one example of many situations that will determine what your right price is.

This is my new mantra. As everything can come down to if you've put in the work or not. One aspect of this is analyzing cards. Ever stopped, taken a moment, and really looked at what the powerful cards do. Do you play multiple games? Ever looked at the broken concepts from say Yu-Gi-Oh? I've always felt one of the most broken concepts in all of Magic is using your life total as a resource. Usually in the form of casting cards or drawing cards. Necropotence is the pinnacle of this to me. I can't help but look at when they decided to FIX Necropotence, for instance. When they revealed Yawgmoth's Bargain I almost laughed out loud. They did not simply increase it's mana cost.

THEY DOUBLED IT.
THAT DID NOT WORK.

If you understand the impact of doubling a card's mana cost, adding more colored symbols or even making a card multi-colored, then you probably can understand how dramatic a difference doubling should be. Even with that, Yawgmoth's Bargain showed that drawing cards with your life created enough issues that multiple cards were eventually banned in an effort to figure out who was actually the culprit. This leads me to Griselbrand for instance:

This card has been talked about in multiple scenarios as a problem child for Legacy right now. Mainly because there are too many ways to get him into play. Once he is in play he can just take over the match typically right then and there. After his release, and the price dropped to below $10 - the common thought was that he would never be above $15. This is VERY short sighted, as we can tell now. As I mentioned at the beginning of this piece - there are no bad times to invest in a card these days. What did my assessment tell me? Looking back on history, I placed Griselbrand as a $30 card in the long run. Once he became hard to find, his ceiling should hit $60. Karn Liberated is making me reassess situations like this though, so a follow up will be due in a future article.

Keep in mind though, when I speak of assessing the power level of a card - there are no bad assessments, just bad assessors. If you missed the big hubbub of a card getting ready to take off, more than likely you didn't put in the correct amount of work to see it. Maybe you were too occupied with school. Maybe it just didn't click one day in the right way. Either way, you have to focus on what's going on. Dependent on the people, information, and time you have access to will completely determine how much work you have to put in.

I have a wealth of experience going back to The Dark in 1995 to draw on. I've witnessed three "emergency bans." I can not recall how many "neuterings" of strategies I've seen. Or even how many times Wizards has left things completely alone. In this experience, I've started to get a feel for what Wizards has done in the past. You may not have that same experience yourself, but talking about Magic with friends, gamers, commentators or other Magic personalities is not hard. A lot of us LOVE to talk about this game - so feel free to ask questions. Starting from what you don't know, and working backwards is a great way to start figuring out where you need to start.

When you can put all three things together, no matter how the market changes - you won't be effected. The changes in price will not conflict with your long term goals for a card, and the price you entered in at will not interfere if your plans have to change. If you're consistently aware of what's going on, you can make changes on the fly and continue the upward progression and growth necessary to consistently move forward. All it takes is did you put in the work? If you can answer that question as "Yes." then you will never know what "plaid" feels like.