Over the last week and a half I made an uncharacteristic gamble on Wall Street. After tracking a speculative Hydrogen Fuel Cell stock, Plug Power (PLUG), for a number of months I discovered the stock was experiencing some speculative activity. This type of chart puts most MTG finance curves to shame! 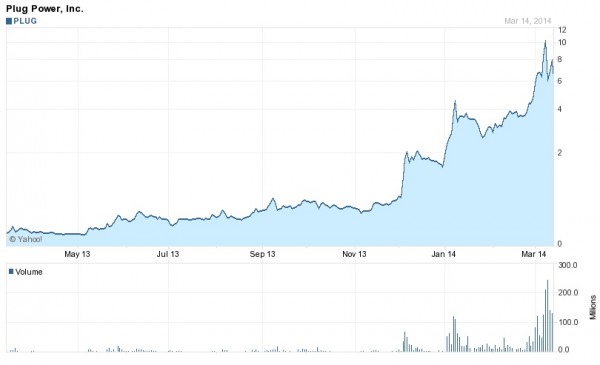 I included the volume bar graph to indicate the step change in activity, a suggestion that more than just a few risk-taking investors are interested in this company. After the hype became unbearably high I pulled the trigger and bought a handful of shares at $5.76/share.

A few days later the company’s CEO appeared on CNBC and declared the company would be profitable this year. I saw the stock top $11--after witnessing this phenomenal growth (in speculation, that is) I decided my ride on this roller coaster was finished. I sold at $11, banking a solid 80% gain in less than five business days.

Since then the speculation has continued, but in a significantly less favorable manner. Once the price reached double-digit levels the sellers came out in full force. Suddenly there were too many shares available on the market, and the price plummeted. It now rests at $6.71 (as of market close last Friday).

Up until the end of 2013, PLUG stock was gradually motioning upward in a healthy fashion. Once speculators got wind that this was a “hot stock” due to recent contracts, newsworthy buzz, etc., the stock’s price took off.

But the growth may not be at all sustainable. Too many hands in the kitchen trying to speculate has led to a bubble. The future is unclear for this company and there will likely be many more double-digit percent moves for PLUG in the future. The gamble I took was profitable and fun, but I also recognize my fortunate timing.

Taking a step back, the shape of this chart looks awfully familiar. Haven’t we seen massive speculative buying before? Perhaps on every Modern card worth mentioning?

It’s eerie how similar the price curve for Birthing Pod resembles that of PLUG stock. The card was gradually rising in price through the end of 2013, but a few successful results at major tournaments led to sudden spikes in demand.

This begs the question: who has been moving the market these past couple months? Granted, more players will likely want to play Birthing Pod in their Modern decks knowing how powerful Pod lists can be. But could this be enough reason for the drastic changes we’ve seen? I suspect there’s more to this story.

Speculators are buying up copies by the dozen in anticipation of increased demand. Granted, the card’s price was destined to increase in the coming months as PTQ season approaches. But the price jump seems rushed and overdone.

This argument is supported by the fact that the card’s price has pulled back (similar to PLUG stock) over the last few days. Spikes like this are difficult to sustain, and there is usually a regression, at least in some small degree, as players react to the new price.

So You're Saying Sell Modern Staples?!

That sounds silly, doesn’t it? Selling Modern staples prior to Modern season’s beginning seems rushed and ill-timed. Prices are bound to rise higher once PTQ grinders all over the world seek Modern staples for their decks. Aren’t they?

On average, yes. But I would argue that the potential growth going forward varies significantly from card to card. Now that Birthing Pod is already a $20 card, it’s much more difficult to say with confidence that the price will go higher.

The great power of Birthing Pod was bound to drive the price higher, but now this growth is mostly priced in. Speculators anticipated Pod’s success in the Modern format. After all, Pod decks took five of the Top 8 slots at GP Richmond--what surprise remains? Everyone already knows and expects Birthing Pod to continue its dominance.

The same goes for many successful Modern staples, such as Splinter Twin.

This aura is the backbone of a popular, Tier 1 Modern deck. As a result, we’ve watched the card spike from $5 to $25 in a few short months. The price increase is absolutely merited--of this I have no doubt.

But now that everyone knows and expects Splinter Twin to be a successful archetype in Modern I question what upside remains. Speculators have moved in hard on staples like Splinter Twin. Unless no one decides to sell their copies come Modern season, I suspect the supply will suddenly become available at these new, high prices.

Here’s my point. Some Modern staples have demonstrated their power time and again, and speculators have bought in hard on these cards. No one is surprised by Living End’s sudden price jump because the deck is popular and has some level of success.

But with so much upside already priced in, I’m tempted to take profits off the table and move my resources elsewhere. For example, some Modern staples in Tier 1 decks have not shown bubble-like trends. Compare Affinity cornerstones Inkmoth Nexus and Glimmervoid.

Inkmoth Nexus has jumped significantly in the past couple months. No surprise, right? Most speculators expected this.

What I want to point out is the lack of movement on Glimmervoid. Both lands are mainstays of Modern Affinity. Yet speculators have flocked heavily towards the former and not to the latter. This could be due to the recent reprint of Glimmervoid in Modern Masters. Perhaps there are more copies available on the market due to this reprint, versus the infect land that hasn’t been printed in a few years.

This only signifies opportunity in my mind. Speculators are neglecting Glimmervoid in favor of Inkmoth Nexus while both are key to a Tier 1 Modern deck. My inclination is to do the opposite of the market and move away from Inkmoths and into Glimmervoids. The remaining upside on the latter is significantly higher in my opinion, and the risk of a bubble burst (or reprint?) is lower.

The Plan Going Forward, And Disclaimer

It’s not that I expect Inkmoth Nexus to decline in price. If you’re in the camp holding 100% of your Modern portfolio until the summer, I can’t fault you.

But when assets spike in value, just like Plug Power stock and Birthing Pod, I call into question the sustainability of the spike. If speculators are truly the ones driving these prices higher, then the prices may have bubbled a bit. And while the long-term trajectory may still be upward, I feel much less confident holding cards that may be in a bubble. Why not take some profits off the table and move into safer assets?

This is precisely what I plan to do. I’ll be at GP Cincinnati this weekend and I sincerely hope dealers will continue their aggressive pursuit of Modern staples as they prepare for the upcoming PTQ season. If this is the case, it will be difficult to convince me not to move my inventory that has most displayed this “bubbly” behavior. Birthing Pod, Inkmoth Nexus, Blood Moon, etc.

But I don’t plan on sitting on the proceeds for long. No sir. My plan is to move into other Modern staples that have not bubbled…yet.

Glimmervoid is just one example. Scars of Mirrodin fast lands are another stable position with plenty of upside. Gemstone Mine is another land I have my eye on--it has gone up a couple bucks in the past month, but that’s not nearly the percentage spike we’ve seen on stuff like Simian Spirit Guide.

It’s all about buying low and selling high. And while rising tides do raise all ships, I hope to be onboard the ships with the greatest potential. As I’ve said many times in the past, every dollar that a card rises means a dollar less upside.

While fundamentals could impact potential gains, remember most upside of the Modern PTQ season approach is already priced in. No one knows if a new deck will suddenly break out, but everyone knows that Simian Spirit Guide will be in demand. But if everyone knows this, the price should already reflect this widely understood conclusion.

What upside remains is not going to behave like the speculative movements witnessed recently on these staples. We will only see gradual rises in demand from actual players needing cards for decks. And when this happens, rest assured the speculators will come out in full force with their copies to meet demand.

One disclaimer: reprints! I still have no clue what cards will be reprinted in Conspiracy and the Modern Event Deck. I won’t even bother trying to guess. All I’ll say is that a sudden increase in supply from Wizards of the Coast, in any sizable quantity, will change the trajectory of the reprinted cards.

I’m tempted to guess that the more expensive cards will be more susceptible to reprinting. But this is a wild assumption with little to back it up. There’s little we can do to plan for reprints, but I can advocate diversification to minimize impact on your portfolio.

I’ll close by reiterating one fact: we’re not done making profits on Modern. Prices of Modern staples will inevitably rise. Rather than sit complacently on whatever staples you already have in your portfolio, I advocate shifting the balance away from cards which have already spiked and into cards on the gradual rise.

In my opinion, this is where the largest percentage gains lie in the coming months. Therefore, that’s where I want my money to be.